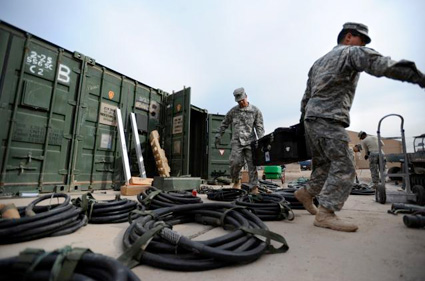 BAGHDAD — As Multi-National Corps – Iraq moves into the second phase of the drawdown of troops and equipment from Iraq, it faces challenges ranging from the withdrawal of roughly 80,000 service members to a connex filled with pink roller skates.

Although MNC-I has just finished phase one of the safe and responsible withdrawal of equipment and personnel in Iraq – setting the conditions – it has moved into the second phase of the drawdown without pause, said Lt. Col. Tammie Pettit, the Multi-National Corps – Iraq logistics plans chief at a sustainment conference Aug. 15 on Camp Victory.

“It’s been a lot of hard work for a lot of people,” Pettit said. “We’ve done pretty well.”

Brig. Gen. Heidi Brown is leading the responsible drawdown of the roughly 130,000 troops in Iraq to roughly 50,000 by August 2010. Additionally, the number of civilian contractors in country is slated to be reduced to roughly 75,000, Brown said.

“None of this is negotiable,” said Pettit. “This is a mission we cannot fail.”

MNC-I teams inventory, repair and update items the U.S. military will transport to Afghanistan, Kuwait, other overseas areas of operation or back to the United States, and the items to be transferred to Iraqi control to support the enabling of Iraqi Security Forces as the U.S. withdraws, Pettit said.

“We’re really starting to prime the pump to get stuff moving out of here,” she said. “We’ll continue to support (Operation Enduring Freedom in Afghanistan) where we can.”

She said phase two of the drawdown will build on the steps taken during phase one. In phase one, non-essential equipment was identified and in phase two, it will be retrograded, transferred or redirected to support other U.S. military priorities, Pettit said.

Chief Warrant Officer Paul Orthel, the 13th Sustainment Command (Expeditionary) supply branch technician, said he plans to bring the number of SSAs in Iraq to18 at the end of phase two.

Phase three will focus on safety operations, Pettit said. The retrograde of equipment not required to support the upcoming elections in Iraq will allow units to focus on enhancing route security, moving forward with the drawdown and supporting redeploying units, she said.

“Protection of the force will still be paramount during this drawdown,” Pettit said.

Orthel said this phase should bring the number of SSAs to 11.

Lt. Col. Lew Cureton, the 13th Sustainment Command (Expeditionary) munitions branch chief, said he looks to the multi-national divisions to determine where to send munitions as they are packaged and moved out of the SSAs during the next phases in the transition.

“We can’t really draw down until we have a good understanding of where that’s going to be,” he said.

He said he knows those locations will change throughout the drawdown and anticipates the groups will adapt accordingly.

Throughout Iraq, a large but innumerable amount of connexes filled with everything from unused equipment and parts to pink roller skates present a particularly large challenge in the drawdown, said Pettit. Units should look within themselves for the personnel necessary to expedite this process safely, she said.

“It’s going to take everybody,” she said. “There is a lot of work to do. The folks following all of us are going to have a really difficult job.”