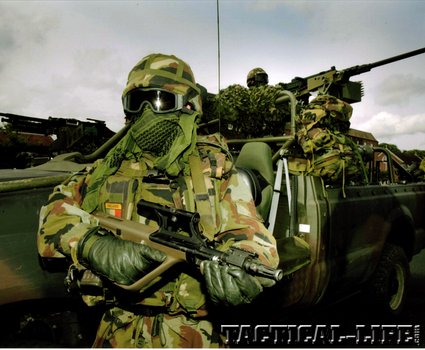 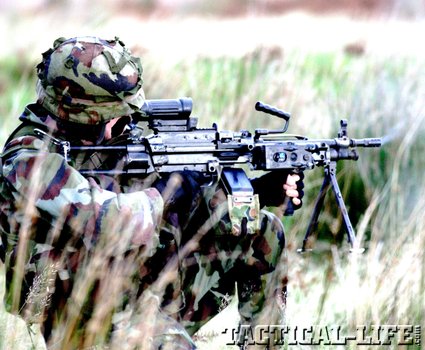 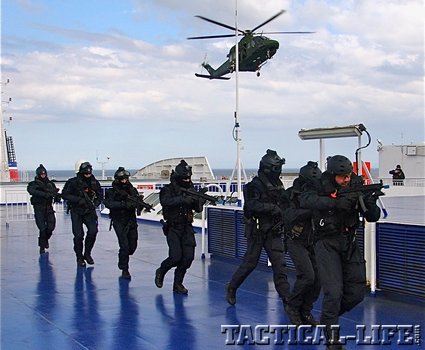 3 of 4
ARW ship clrg-7_phatch
Members of the Irish Army Ranger Wing have fast-roped onto the deck and a practicing a ship takedown. 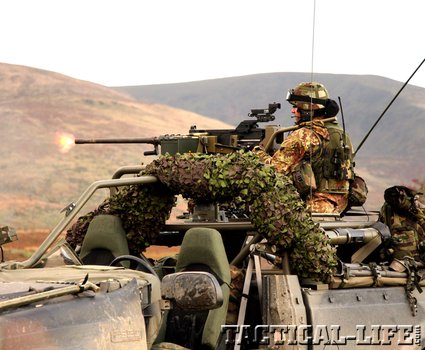 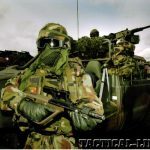 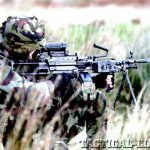 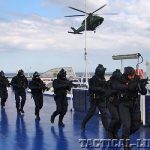 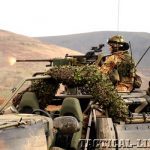 Irish soldiers have fought throughout the world for centuries, establishing a reputation for being steadfast in the face of the enemy. Of course, for the “Wild Geese” fighting for France, that enemy was often the English! However, over the years large numbers of Irish soldiers have also fought heroically for the British crown as well as the U.S., Canada, Australia and other English-speaking countries. Just consider the Irish Brigade of the U.S. Civil War or the “Fighting 69th” of World War I-two examples of Irish-American units.

Today, the Republic of Ireland has just roughly 10,000 members in its Defense Forces to protect Irish sovereignty and neutrality. Special operations capability within the Irish Defense Forces rests with the Army Ranger Wing (ARW), or the “Sciathán Fianóglach an Airm” in Gaelic. The term “fianóglach” harkens back to “Na Fianna” (“The Warriors” in English), who were legendary and can also be seen on the ARW’s shoulder-tab insignia.

The ARW can trace its beginnings to the Irish Defense Force personnel who attended the U.S. Army Ranger Course during the late 1960s and early 1970s. These graduates offered the first Ranger course in Ireland in 1969, emphasizing the same skills taught to U.S. Rangers, including small-unit tactics, endurance, survival and marksmanship. For the next decade, Irish troops who attended Ranger training went back to their units and taught them the skills they had learned. Then in March 1980, as a result of the increased threat of terrorist acts, Ireland established the ARW to give the Republic special ops and counterterrorism capabilities.

Selection for the ARW lasts for four weeks and requires candidates to pass rigorous physical tests, including water confidence, an assault course, land navigation and a 10-kilometer combat run. Also the candidates’ aptitude for special operations is assessed, including long-range recon patrolling, surveillance, intelligence gathering, ambush and counter-ambush, and a timed 45-kilometer group march. Other tests include rappelling, jumping from a bridge into water, using teamwork to cross a river, operating in confined spaces (a test for claustrophobia), and various trials of strength, stamina and determination. Typically only about 15 percent of candidates complete the ARW selection process.

The ARW’s primary missions include (1) operations behind enemy lines such as patrolling, intelligence gathering (covert observation), raids, ambushes and diversionary operations; (2) counterinsurgency operations; (3) aiding civilian government with tasks such as VIP protection and hostage rescue; (4) testing new military equipment and conducting specialized courses for other members of the Irish Defense Forces; and (5) disseminating ranger skills to the rest of the Defense Forces when troops return from the ARW to other units.

The ARW trains with other friendly special operations units such as the Australian SAS, the New Zealand SAS, the Canadian JTF2 and the Canadian Special Operations Regiment, and with European counterterrorist units such as France’s GIGN, Germany’s GSG9, Sweden’s SSG and Italy’s COMSUBIN. The ARW’s relationship with the U.S. Army Rangers remains very strong.

The ARW uses the Steyr AUG A1 and AUG A3 (the AUG is the standard rifle of the Irish Defense Forces), and M203 grenade launchers may be mounted. ARW operators also use the HK416 and have used the HK33 and HK53. For light-machine-gun support, the ARW uses the FN Minimi Para.

The primary pistols in use are the Sig Sauer P226 and P228. HK USPs have also been used, possibly with suppressors. The ARW has employed HK submachine guns such as the MP5A3, MP5SD6, MP5F, MP5K, as well as the FN P90. Shotguns include the Benelli M3T and M4, as well as the Franchi SPAS-12 and Remington 870. Sniper rifles include the Accuracy International L115 in .338 Lapua and L96A1 in .308. For longer range “anti-materiel use,” the Accuracy International AW50 is available. The HK417, an enlarged .308 version of the HK416, serves as a designated marksman rifle. Steyr SSG69 rifles have been used in the past, but I do not know if they are still in the ARW armory.

3 of 4
ARW ship clrg-7_phatch
Members of the Irish Army Ranger Wing have fast-roped onto the deck and a practicing a ship takedown.

The ARW is based at Curragh Camp. Members of the unit are subject to immediate recall for deployment if needed. The ARW has always been somewhat secretive about revealing the number of personnel in the unit, but the number generally accepted is somewhere between 100 and 150. Since the Republic of Ireland is a neutral state, ARW deployments outside of Ireland have been for “peacekeeping missions.” The first of these was to Somalia in 1993, when members of the ARW were deployed to provide convoy security.

During the Second Liberian Civil War (1999–2003) ARW operators deployed with a contingent of more than 400 Irish Defense Force troops to give the ARW a special ops capability. Among their missions in Liberia was a successful rescue of hostages taken by renegade Liberian troops. In 1999, 30 members of the ARW were sent to East Timor to operate alongside New Zealand and Canadian troops along the West Timor border. I remember a video a friend had sent me, which was shot during this deployment. It showed a group of “panicked” Rangers running down a road to get away from a snake. This video was, of course, a joke based on the fact that, thanks to St. Patrick, there are no snakes in Ireland. A larger ARW deployment of 54 operators took place in Chad in 2008, where the ARW operators carried out recon missions to select a secure base for the larger Irish Defense Deployment that followed.

As this is written a contingent of Irish Rangers reportedly will be sent to Aden as part of the EU NAVFOR mission of combatting Somali pirates. It is my understanding that in September 2012 members of the ARW were honing their combat boarding skills in preparation for the mission. For this 30 Rangers are to be deployed, including three six-man assault teams. Presumably some snipers will be included as well. In the Irish press it is being emphasized that the Rangers are being deployed to protect ships carrying humanitarian cargo for the “World Food Programme.” I assume that will make killing pirates more acceptable! However, the Irish Defense Forces have stated that there has still not been approval to deploy the Rangers as of mid-September 2012.

The Garda Síochána, the police force of the Irish Republic, has its own elite unit that is trained for hostage rescue, barricade situations, dealing with armed criminals, execution of high-risk warrants, VIP protection and other special duties. Designated the Emergency Response Unit (ERU), or “Aonad Práinnfhreagartha” in Gaelic, this unit was originally formed in 1978 as the Special Task Force and named the ERU in 1987. Members of the ERU train with the ARW and have also trained with the FBI HRT. Since the FBI has a large Emerald Society Chapter, I’m sure the off-duty hours were festive during exchange training! The ERU has also trained with other European police counterterrorist units, including GSG-9. The strength of the ERU is approximately 50 officers, who have duties throughout the Republic.

ERU members are required to qualify with all weapons used by the unit, three times a year. These weapons include the Sig Sauer P226, S&W Model 59 and Walther P99 pistols (generally I have seen members of the ERU armed only with the P226); the HK MP7 personal defense weapon; the HK G3KA4 short-barreled carbine; the HK33 assault rifle; the Steyr SSG 04 sniping rifle; and the Benelli M4 Super 90 and Remington 870 shotguns. (The 870 is used primarily to launch beanbag rounds.) Since the ERU has limited manpower, there have been situations in which members of the ARW and members of the ERU were assigned to work together.

In most major U.S. police forces there is a long tradition of tough Irish cops. This same tradition has held in places such as Shanghai, where the Irish were well represented in the SMP. Ireland’s martial heritage has also long been represented in the Irish regiments of the British Army and in Commonwealth armies, as well as by those of Irish descent in the U.S. armed forces. Today, the ARW and ERU show that martial spirit is still alive in the “Ould Sod.” 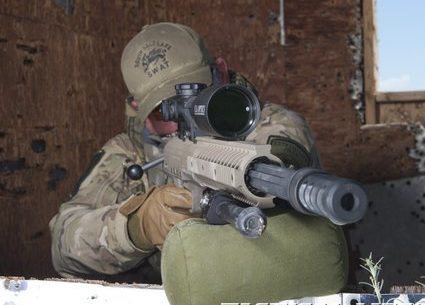 Irish soldiers have fought throughout the world for centuries, establishing a reputation for being…