by Michael Janich
in Guns, Rifles
0

0
SHARES
0
VIEWS
Share on FacebookShare on Twitter
Iron Ridge’s ballistics and testing advisor, Michael Andrews, puts the IRA-X Thor through its paces. In order to produce the most precision downrange, this 7.62mm beast is crafted with great attention to detail

Like most seasoned shooters, I expect a lot from someone worthy of the title “gunsmith.” I also associate the word “custom” with truly unique products that are created by a high level of craftsmanship. Both of these terms accurately describe Iron Ridge Arms, a custom shop and small-scale manufacturer nestled along the Front Range of the Rocky Mountains. 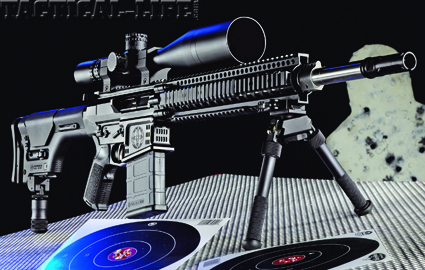 Iron Ridge’s most popular item is the IRA-X Thor, which can be configured with a wide range of barrels, forends, stocks, and other parts to meet customer needs.

The driving force behind Iron Ridge is its founder, Oliver Mazurkeiwicz. A life-long shooter and sportsman, Mazurkeiwicz began tinkering with guns at an early age and gradually evolved into a very competent hobbyist gunsmith. In the late 1990s, he set up a shop in the garage of his home and started focusing on firearm finishes. He soon had a steady stream of shooting and hunting buddies asking him to coat their guns and bragging to their friends about the results. Word spread and the business rapidly grew, so in 2004 Mazurkeiwicz left his full-time job as a paramedic, hired a veteran professional gunsmith and founded Iron Ridge Arms.

In the first few years of operation, Iron Ridge operated like most gunsmithing shops, providing a full scope of repair and customization services for a broad range of firearms. However, the popularity of Mazurkeiwicz’s tactical-style coatings soon began to attract more and more law enforcement and military customers. Since Iron Ridge was founded from the beginning as a Class 2 and Class 3 manufacturer, Mazurkeiwicz was ready and able to serve the specialized needs of these customers. Iron Ridge quickly became the go-to resource for the repair and modification of high-end tactical rifles in Colorado’s Front Range region.