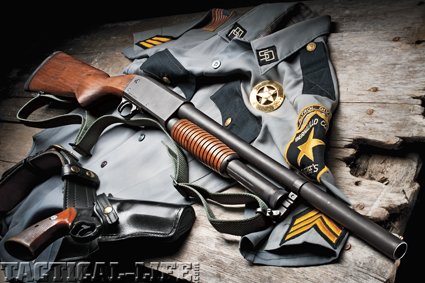 With classic styling that looks right at home with a law enforcement uniform, the Ithaca M37 is capable of providing swift and effective fight-stopping firepower.

Sometimes we can get too much of a good thing. The use of synthetics in construction of the stocks and frames, and aluminum, titanium, or scandium in the construction of receivers and frames are all good things. But lately I have been longing for the days when, as my friend puts it, “ships were wood and men were steel.” 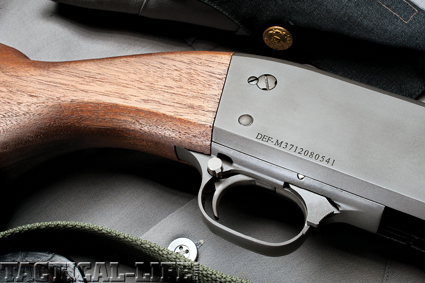 The Ithaca 37 Defense features fine CNC machining, with a pushbutton safety at the rear of the triggerguard and slide release tab at the front.

A gun that has helped to satisfy some of my retro gun needs was the Ithaca Model 37 Defense pump gun. Yes, the same Ithaca pump shotgun from 1937, no longer made in Ithaca, New York—or in some far-off
foreign land — but still right here in the USA.

Today’s Ithaca’s are produced by David Dlubak’s modern factory in the small farming town of Upper Sandusky, Ohio. Today’s Ithaca shotguns are precision-constructed on modern CNC machines, which allow you to produce a gun that is exactly the same as the original — same pieces, parts and materials, but at a fraction of the cost and in a fraction of the time. For instance, the receivers of the Model 37 start out as a solid 7.5-pound block of C11L17 steel (heavier than the entire M37 when it is finished), and in five steps are turned into an entirely finished receiver. Back in the day, it took multiple skilled machinists 32 steps to do the same thing. There is no waste and no ruined parts in CNC machining unless the initial setup was wrong. As I observed at the Ithaca factory, today’s machinist needs to be a cross between a highly skilled person who works with his/her hands, and a computer programmer. 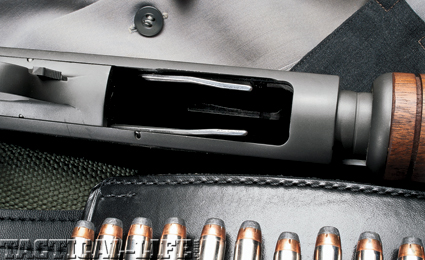 One port does it all on the M37-loading, unloading and ejection. Bottom ejection keeps shells from interfering with self and others during firing, and reduces entry points for dirt by half over competing designs. 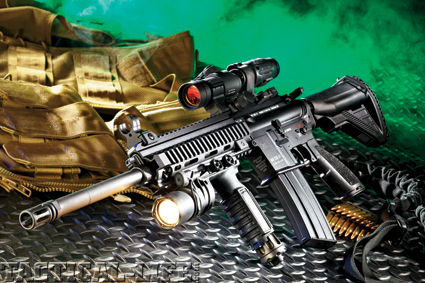 With classic styling that looks right at home with a law enforcement uniform, the…