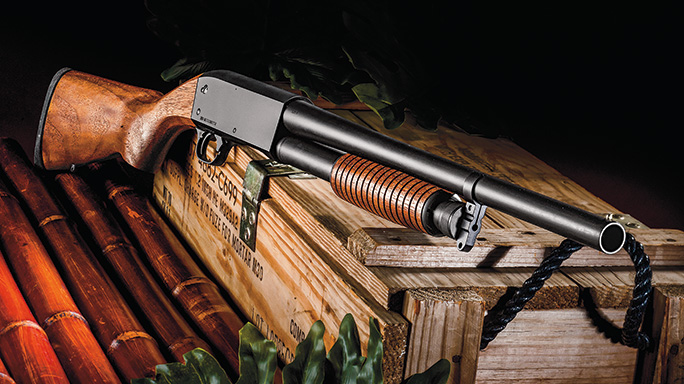 1 of 5
Photo by Sean Utley
Classic Blaster: The Ithaca Model 37 Shotgun
Ithaca’s Model 37 has served alongside soldiers and police officers for decades, and the current Defense Gun variant brings classic looks with modern manufacturing technology. Even without a shell holder, the gun offers 7+1 rounds of awesome power. 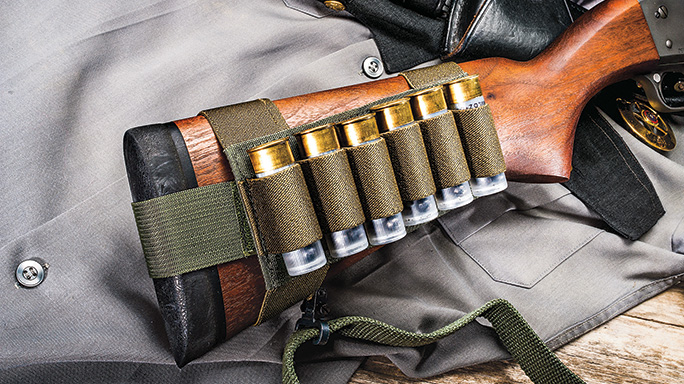 2 of 5
Photo by Sean Utley
Classic Blaster: The Ithaca Model 37 Shotgun
“Experienced users would push the Model 37 towards the target with their support hand while holding the trigger back and just cycling the slide.” 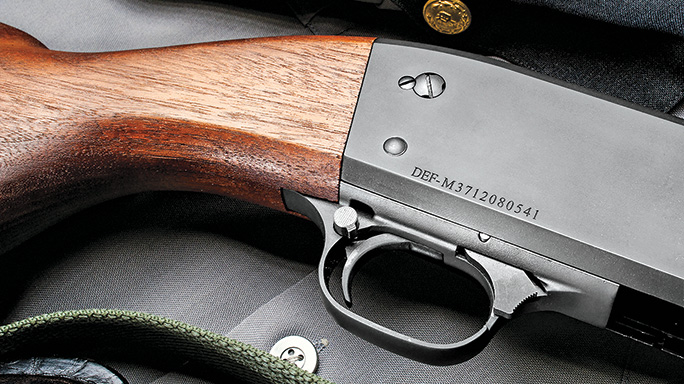 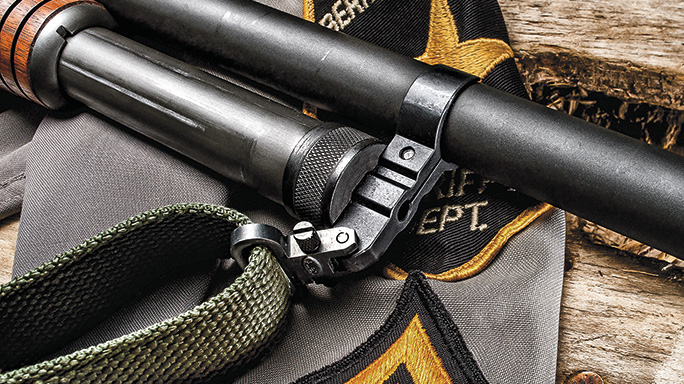 4 of 5
Photo by Sean Utley
Classic Blaster: The Ithaca Model 37 Shotgun
“Studs for sling swivels at the front of the magazine and towards the rear of the stock make it easy to use a sling on the Defense Gun.” 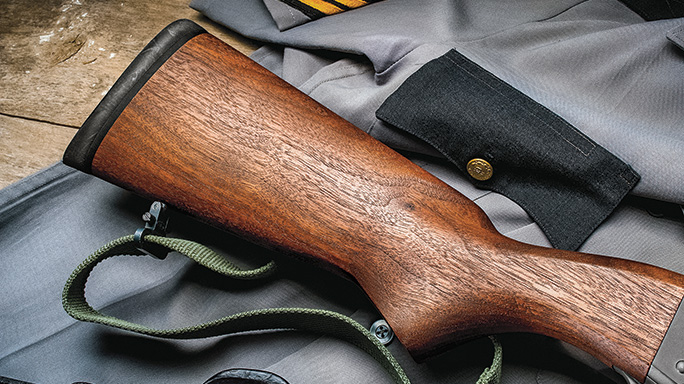 5 of 5
Photo by Sean Utley
Classic Blaster: The Ithaca Model 37 Shotgun
The wooden stock features a stiff rubber buttpad and a stud for a sling swivel. 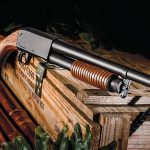 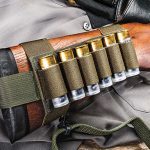 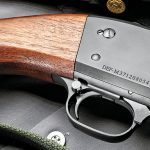 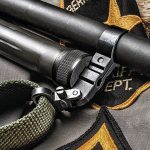 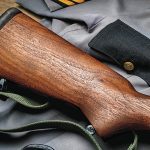 The Ithaca Model 37 riot gun was never as popular for police use as the Remington 870, but it did have some notable users. It was the standard shotgun of the LAPD for many years in what is usually referred to as the “LAPD Configuration.” These Ithacas had 18- or 20-inch barrels, though I’ve been told at least some for detectives had 14- or 16-inch barrels. Generally, LAPD 37s did not have the full-length, eight-round magazine tube but the shorter four-round magazine. LAPD Model 37s also had rifle sights.

Based on the few conversations I’ve had with LAPD officers who used the Model 37, they always liked the shotgun, though they emphasized that it could not be carried in the patrol car with a round chambered. Of course, this really applies to any shotgun carried in a patrol car. I’ve also been told that as recently as 10 years ago LAPD and/or LA County sheriffs were still using some Model 37s. Both the Chicago PD and NYPD also used Ithaca Model 37s at one time.

The Model 37 shotgun, in both riot and trench gun formats, also saw substantial U.S. military usage, especially with the U.S. Navy SEALs in Vietnam. Note that the term “trench gun” normally indicates the weapon was fitted with a ventilated handguard and bayonet lug. The first military orders for the Ithaca Model 37 were during World War II, when longer-barreled guns for training in aerial gunnery (to teach lead on targets) as well as riot and trench models were ordered. Only 1,422 Ithaca trench guns were actually delivered during World War II, plus about 5,000 riot guns (most of which had 22-inch rather than 20-inch barrels) and longer-barreled training shotguns. This was because the government had asked Ithaca to concentrate on producing Model 1911A1 pistols for the military instead.

Use of the Ithaca Model 37 in combat was much more prevalent during the Vietnam War. One 1962 contract for 22,000 Model 37 riot guns with 20-inch barrels was for South Vietnamese troops. U.S. military advisors to South Vietnamese forces used at least a few of these shotguns. Additional Model 37 riot guns were manufactured for U.S. forces and marked with the “U.S.” designation. A substantial number of these Model 37s went to the U.S. Navy SEALs. In 1963, a very small number of Model 37 trench guns with bayonets—a little over 200—were supplied to the USAF. Another contract for Model 37 trench guns went to the U.S. Navy.

One of the features that made the Model 37 especially appealing to the SEALs and U.S. Army Special Forces in Vietnam was a feature it shared with the long-serving Winchester Model 97 and Model 12 riot and trench guns. The Model 37 did not have a trigger disconnect and, hence, it could be fired very quickly by just holding back the trigger and operating the slide action.

Riot or trench guns were often carried by the point man of a patrol and used to quickly clear a trail if an enemy was suddenly encountered. Experienced users would push the Model 37 towards the target with their support hand while holding the trigger back and just cycling the slide. It was faster than most automatic shotguns. I say “most” because I never put a stopwatch on a Model 37 against a Benelli.

Although this feature would not be as applicable for law enforcement usage, at least some LE users were well aware of the feature should they have to deal with multiple criminals quickly! I used to have an older Model 37 riot gun with a full-length, seven-round magazine and what some call the “slam fire” feature, which I carried in my vehicle for some years. As I remember, it was an ex-Illinois State Prison gun, which I stupidly sold.

Recently, though, I had a chance to test Ithaca’s Model 37 Defense Gun, the current version of the classic M37 riot gun. The Defense Gun is available with either an 18.5- or 20-inch barrel and a four- or seven-shot magazine. It is also available with a wooden stock and forearm or synthetic furniture. I chose the wooden version with a black Parkerized finish, as it reminds me of the Model 37s I used back in the day. My test gun had the 20-inch barrel and seven-shot magazine.

Like the original, the Ithaca Model 37 Defense Gun ejects downward, which allows for easy use from either shoulder, and when you’re shooting close to walls you don’t have to worry about spent shells coming back at your face. A question that may arise for some is whether the downward ejection makes it difficult to shoot the Model 37 while prone or using low cover. Based on my experience, the answer is that it does not as long as there are a couple of inches of clearance. In simple terms, don’t press the ejection port against the ground or directly against a surface.

Studs for sling swivels at the front of the magazine and towards the rear of the stock make it easy to use a sling on the Defense Gun. Speaking of the stock, it is fitted with a nice, thick recoil pad—a feature I appreciated when shooting 3-inch magnum loads while testing the gun. The firearm’s grooves offer a good gripping surface for fast operation.

I tested the Ithaca Model 37 Defense Gun with Winchester 3-inch magnum #1 buckshot, 2¾-inch Federal Tactical 00 and #4 buckshot, and Winchester 2¾-inch light-recoil 00 buckshot loads. Patterns were good at 10 and 15 yards. At 10 yards, all 24 of the #1 pellets impacted into the chest area on an IPSC-type target. At 15 yards, patterns opened up some more, with all the Federal 00 buckshot staying on the target, and almost all buckshot from the other loads on it as well.

The Ithaca was comfortable to shoot and handled well, though it wasn’t as fast as the old classic Model 37, since the ability to hold the trigger back and just “slam fire” was eliminated sometime in the 1970s. It is still a good fighting shotgun—light and handy yet easy to shoot and quite reliable. It offers a definite option for anyone desiring a home-defense shotgun with a bit of history.

The PMAG12 GL 9 from Magpul adds two more rounds of capacity for the...