1 of 7
Israeli Warrior Reborn: IWI’s Galil ACE GAP39 Pistol
The new Galil ACE pistol is a compact and powerful handgun. Small enough for easy portability yet packing sufficient power to drop a deer, the ACE is the first of a new family of firearms based upon the proven Israeli Galil action. 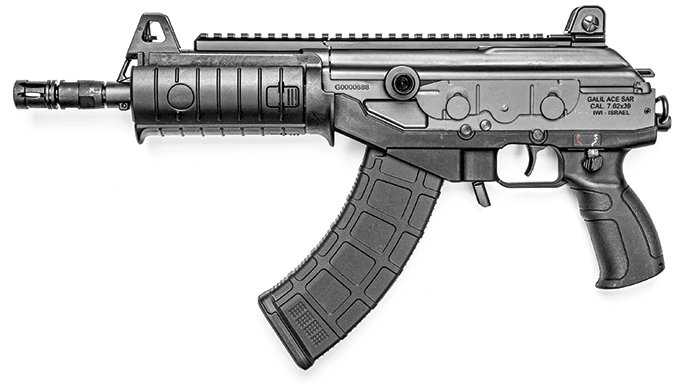 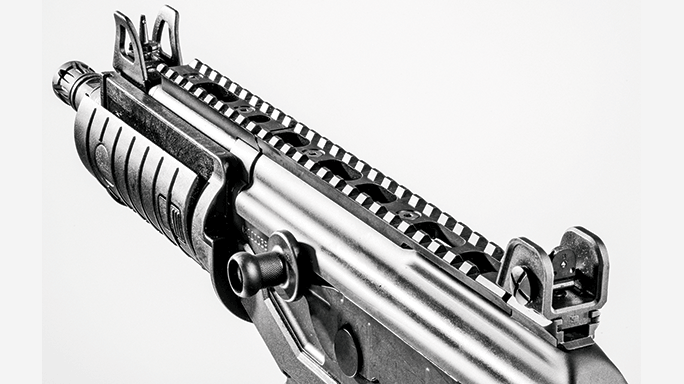 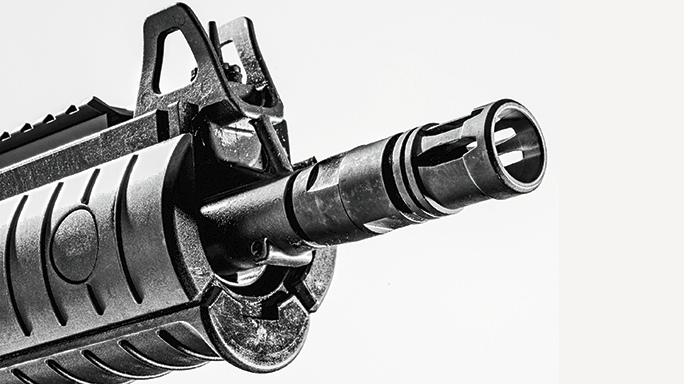 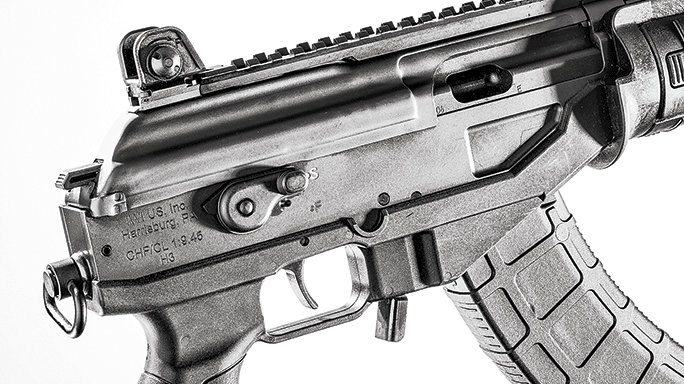 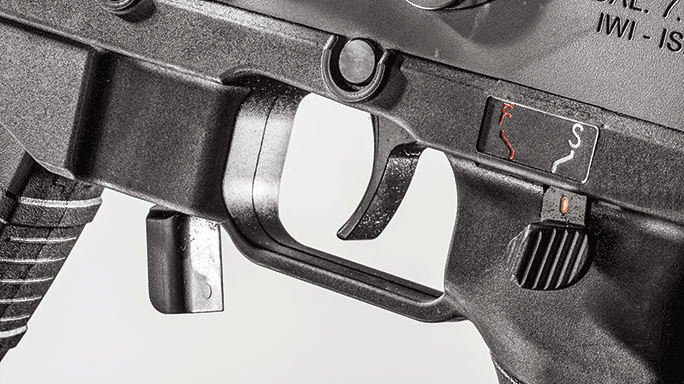 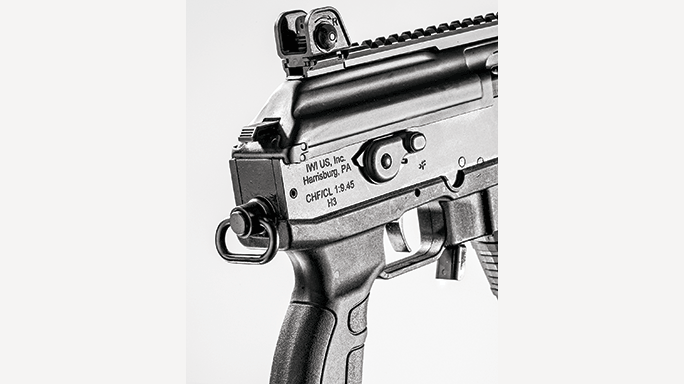 7 of 7
Israeli Warrior Reborn: IWI’s Galil ACE GAP39 Pistol
The rear of the Galil ACE Pistol features a sling loop that makes it easy to add a sling—a boon to recoil control while firing off-hand. 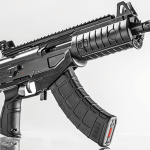 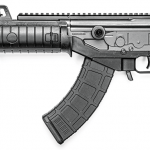 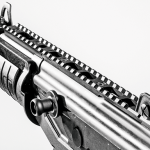 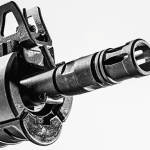 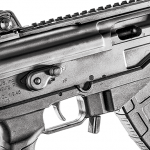 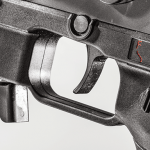 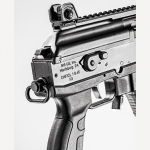 Early on in its modern history, the burgeoning state of Israel was desperately short of weapons. In the years immediately following its independence in 1948, establishing a domestic manufacturing capability for small arms was a critical priority. Major Uziel Gal answered his nation’s call and designed what was arguably the most robust and effective sub-machine gun in history.

The Uzi was built on industrial presses and struck a balance between ease of manufacture and battlefield effectiveness seldom rivaled. Despite its heavy weight, the Uzi was compact and sufficiently effective to be exported across the planet.

In the consecutive wars that immediately followed its independence, Israel typically used surplus World War II-era weapons as they became available. A surprisingly large percentage of the armaments used by Israel in these early days were actually Nazi surplus, ranging from Kar98k rifles up to Bf 109G fighter planes imported from Czechoslovakia. Its first really standardized infantry rifle was the esteemed FN FAL.

The FN FAL has a well-earned reputation for superb ergonomics and robust design. However, in the arid environments where Israelis typically fight, the FAL’s performance was at times suboptimal. Given that the Israelis needed a domestic supply of rifles anyway, trials were undertaken to adopt something more appropriate to the terrain and missions of the Israel Defense Forces (IDF).

The design competition to select a new 5.56x45mm infantry rifle for the IDF began in the late 1960s and was, at the time, the most rigorous infantry rifle competition ever undertaken. A rifle designed by Uziel Gal was in the running as was the German HK33. American M16A1s and Stoner 63s took part as well. Captured Kalashnikovs served as controls for the experiment.

Israelis Yaacov Lior and Yisrael Galil designed a hybrid combat rifle that drew from several sources. The prototypes were actually built onto milled Finnish Rk 62 receivers smuggled into Israel illicitly. The final iteration of that original Galil rifle incorporated the side-folding stock of the FN FAL, the 5.56mm chambering of the M16 and the unstoppable action of the inimitable Kalashnikov.

The Galil was adopted for service with the IDF and served alongside American-built M16A1 rifles for decades through a variety of wars and border disputes. Though heavy, the Galil earned a reputation as a reliable and effective combat tool. The Galil rifle was built under license in several other countries and still turns up today in hotspots around the globe, a compelling testament to the innate durability of the design. Now, some 40 years later, all that is good and wholesome about the original Galil is being given a 21st century makeover.

The modernized 7.62x39mm Galil ACE GAP39 pistol is built and marketed by Israel Weapon Industries (IWI). IWI U.S. is the American arm of the company and is also responsible for bringing the fabulously successful Tavor bullpup to this side of the pond. All IWI weapons are designed and built with heavy input from members of the IDF. The robust and effective weapons that result show this influence clearly.

The new Galil ACE improves upon the original in several critical ways. The ACE uses proven polymer components wherever possible to minimize weight while retaining the rock-solid, milled-steel receiver that defined its predecessor. The charging handle still reciprocates with the bolt, but it is now located on the left side of the

rifle for easier access. As this appendage is rigidly affixed to the bolt, it allows the action to be manhandled in the event of fouling or dirty ammo. There is also a simply brilliant pivoting steel cover that keeps debris out of the charging handle slot as the bolt reciprocates.

A full-length, two-part top rail allows the addition of any standard optical sights, including night-vision devices. Iron sights include genuine tritium inserts for night operations and indoor operations with restricted visibility. The conventional front and rear sights are heavily fenced. A forearm tri-rail comes standard along with rail covers and spots for switches to control tactical accessories. There is enough railed real estate on the new Galil ACE GAP39 pistol to accommodate any reasonable accessories.

An ergonomic pistol grip, along with ambidextrous fire controls that are actually easy to use, adds to the superb soldier-weapon interface. Unlike that of earlier Galil rifles, the safety selector is smooth and intuitive. The current iteration of the Galil ACE is chambered for 7.62x39mm and uses standard, and ubiquitous, AK magazines. This weapon is available as a rifle, a short-barreled pistol and as a short-barreled pistol with a folding Pistol Stabilizing Brace (PSB). The PSB is arguably the most inspired piece of firearms kit to be developed in my lifetime.

Later iterations of the ACE will fire 7.62x51mm rounds and subsequent versions will be chambered for 5.56x45mm. The argument can be made that, even after all these years, the 7.62x39mm ComBloc round is still one of the most effective tactical loadings on the planet. Heavy enough to take medium-sized game like whitetail deer yet sufficiently lightweight for easy portability, the 7.62x39mm load has an indisputable combat record.

The Galil ACE GAP39 is the classic “pistol made from a rifle.” As a result, there are literally countless lighter, more-concealable handgun options. However, the GAP39 is profoundly powerful and surprisingly effective. I found the best way to employ the GAP39 was to mount up a single-point sling on the end of the receiver and run the gun with the arms outstretched in the manner of the HK MP5K. So presented, the GAP39 is a remarkably effective and controllable close-quarters weapon. The gun’s muzzle blast is breathtaking, but the 8.3-inch, chrome-lined barrel maneuvers indoors and within a vehicle like a submachine gun while remaining surprisingly accurate from a rest.

The details are variations on the Kalashnikov theme. Standard magazines rock in and out, but the polymer housing precludes the use of drums. While some may grouse that this rocking motion is tedious, the upside is that the resulting leverage will seat a magazine painlessly, even if it is topped off tight. The rigid, reciprocating, left-sided charging handle is markedly faster to manage than the right-sided AK counterpart, and the thumb-activated safety is a mighty improvement over the original.

The GAP39 will run left-handed but is clearly optimized for right-handed operators. The magazine release is completely ambidextrous, but the charging handle is a bit tough to manage for southpaws. Additionally, the thumb safety feels a bit awkward under the left trigger finger. As 85 percent of us are right-hand dominant, this is the market for which the gun is optimized.

The front tri-rail will accept any conceivable accessory and a SureFire X400 light/laser combo will dispel the darkness and drop your rounds right where you want them even in a hurry. With a little practice, the GAP39 becomes a powerful close-quarters tool.

The Galil ACE Pistol is a reflection of the Israeli ethos. Rugged, dependable and optimized for use in the real world, the Galil ACE is an unstoppable design that owes its lineage to multiple proven predecessors. Now in its 21st century context, the Galil ACE combines the timeless effectiveness of the soldier-proven Galil with modern engineering and materials science. The resulting weapon is a remarkably effective defensive tool.

There are literally dozens of tactical firearm designs vying for your hard-earned dollars these days. Some are cutting edge but unproven; others are known designs growing a bit long in the tooth. In the case of the Galil ACE, this is something genuinely different. From the tritium sights, to the milled receiver, to the truly integrated rail system, the GAP39 combines old-world craftsmanship with modern amenities.

The Galil ACE GAP39 sports inspired ergonomics, a cartridge that is proven effective and state-of-the-art incidentals to offer the American shooter a tactical tool that is as effective as it is cool. Whether you want a gun to keep in the closet for those times when something goes bump in the night or to tuck behind the seat of your pickup truck, the Galil ACE will perform those missions with aplomb. Combining Israeli inspiration and American quality, the Galil ACE is a proven defensive tool.

American Gunsmithing Institute helps you build and maintain your very own AK!