IWI US’ new Galil ACE offers big-bore power, gas-piston reliability and upgraded ergonomics so a wider variety of shooters can tackle any threat that comes their way.

My affinity for the Galil SAR began almost two decades ago while I was looking for a reliable 5.56mm rifle with a short barrel for entry duties.

Most of the short-barreled ARs I tested were unreliable. Newer piston-driven models had promise but were anything but dependable. The first two I tested failed in less than a month, so I couldn’t trust them.

The choices then were nothing like those of today, but my part-time job at a local gun store helped. Assisting with sales of weapons for SWAT teams let me try various rifles. Hecker & Koch started to introduce polymer-chassis guns, and the G36C and G36K looked promising. But after melting a couple of handguards, I figured those guns were not quite ready for prime time. My HK53 was great but heavy.

I needed something new, and that came in an Israeli Military Industries (IMI) Galil SAR with a 13.1-inch barrel in 5.56mm. Although it wasn’t a tack-driver, it used a modified AK gas system that was completely reliable and was built like a tank. I used that rifle for a few years, leaving me with a confidence in the design that has yet to be matched. It worked no matter what—dirty, hot, cold, clean, muddy or packed with snow or dirt. The gun just had some issues with ergonomics, and the proprietary magazines were expensive. Reflex sights weren’t popular, so the lack of a top rail wasn’t quite an issue. Luckily, the modern incarnation of IMI, Israeli Weapon Industries (IWI), has begun offering Galils again, this time in 7.62mm NATO. 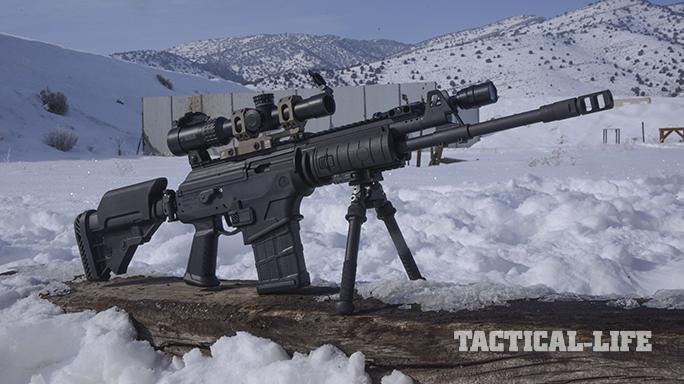 Combat rifles have been chambered primarily in 7.62mm NATO/.308 Winchester since the late 1950s. The M14/M1A was the U.S. military’s primary battle rifle for years. Other popular rifles included the CETME, FN FAL, HKG3 and L1A1. The 7.62mm is still used today in modern combat rifles, belt-fed machine guns and precision rifles. While it’s taken a backseat to the 5.56mm with the U.S. military these days, it remains prevalent in many other countries, especially those that are part of NATO. It’s a great all-around cartridge with solid stopping power. It’s also a favorite among professional trackers working in a myriad of environments, including deserts, forests and jungles.

IMI offered the Galil SAR in a few configurations chambered in 7.62mm NATO, including the Galatz, a designated marksman version introduced in 1983. There were also some standard rifles and carbines, and even a light machine gun. Through the years, the company has continued to improve the design, and now American shooters can obtain the 7.62mm Galil ACE from IWI US.

IWI US’ new ACE is assembled here in the U.S. from a mix of imported and American parts. It starts with a milled-steel receiver for strength and durability. The handguard, mag well, grip and stock are made of polymer to keep things light.

The 16-inch, chrome-lined, cold-hammer-forged barrel has a 1-in-12-inch, right-hand twist rate and is capped with a muzzle brake. Unlike an AK, the gas tube is mounted using a dovetail machined into the receiver. This avoids unnecessary movement during firing and increases the ACE’s accuracy potential and consistency. The full-length, two-piece Picatinny top rail accommodates optics, red dots and other sights. And just like the Tavor X95, the handguard comes with removable rail covers. If you take these off, you can mount accessories, including a bipod.

Designed to keep dirt and grit from entering the action, the charging handle is mounted on the left side with a large knurled knob. Up top, the sights are fully adjustable with tritium inserts.

The Galil ACE accepts any SR-25-pattern magazine. The magazine release itself is ambidextrous to accommodate a wide range of shooters and reloading methods. On the left side you’ll find a thumb-activated safety lever above the pistol grip. On the right side, the safety lever is a bit higher and more like an AK’s. The oversized triggerguard houses a two-stage trigger. It uses a curved shoe and breaks at about 5 pounds.

The AR-style folding stock is adjustable for length of pull and includes a rubber recoil pad. The steel folding hinge locks things solidly in place. With the stock folded, the Galil ACE can fit in most bags and carbine cases, and the entire package weighs a handy 8.7 pounds unloaded.

Previous testing with an Aimpoint Micro T-2 yielded some pretty surprising accuracy. I prefer to use this gun as a light, handy and simple rifle for tracking. However, I wanted to see how it ran with an optic.

Lower-power variable scopes are popular nowadays, and as my age increases, so does their usefulness. So, for this test, I replaced the Micro T-2 with a Burris 1.5-8x28mm XTR II scope using an XTR II Ballistic CQ Mil reticle. This illuminated reticle has mil markings extending from its vertical and horizontal lines. Mounted in the first focal plane, the reticle works like a red-dot sight on low power but can be used for holds at higher power.

I mounted the Burris scope in an American Defense cantilever mount. The rear sight made it a tight fit, but this didn’t affect its zero. IWI US also provides a snap-on cheek riser for proper eye relief. It installs easily and fits tightly in place.

Removing the lower handguard panel made room for an Atlas bipod. The only other addition was a Surefire Scout light.

My best 100-yard group measured 0.81 inches using Remington’s 165-grain Premier AccuTip ammo. Considering that’s what I’ll use in this rifle most of the time, I was pleasantly surprised. Other shooters have seen similar accuracy, mostly in the 1.25-inch range. With the 1-in-12-inch-twist barrel, 168-grain rounds seem to hit the sweet spot, producing good accuracy.

Even loaded with 150-grain Federal American Eagle rounds, the Galil ACE could consistently hit a 6-inch steel target at 300 yards. The trigger pull on my test rifle measured a little less than 5 pounds, which certainly contributed to these results. The two-stage trigger made it easy to run the gun quickly or make slower, more precise shots. It was easy to make controllable doubles and triples in rapid fire, and yet, in prone and supported positions, precise shots were a cinch. There was no trigger slap, and it never failed to reset. The shoe is wide and flat—perfect for gloved hands. Long-stroke rifles are also generally softer to shoot, and this Galil ACE was no exception. Combined, these items allowed for excellent control and accuracy from almost any position.

Moving to longer ranges, the Galil ACE held its own. Given a steady position, I placed 10-round strings on an 8-inch steel target at 300 yards with little effort if I held high. At 400 yards, it was just a matter of holding higher. Using typical bullet-drop data for a 16-inch barrel, gathered from my Kestrel Applied Ballistics meter, I hit steel at 500 yards using the Remington rounds. With the Prime 175-grain match rounds, I zeroed in on the 12-inch steel target 636 yards in just three rounds, and then whacked it several times afterward. In my experience, that’s probably the limits of the cartridge in most practical field situations, but it was impressive nonetheless.

The top rail is solid, but it’s still attached to a cover. However, after opening and closing the top cover several times, the rifle held its zero. During strings of fire at longer ranges, there were no point-of-impact shifts, and using a mount designed for an AR meant I could swap out the scope for a red dot and retain the cheek riser, although co-witnessing the sights wasn’t possible. Even at 1.5X magnification, the front sight wasn’t distracting.

The recoil is soft by comparison and easy to control. As muzzle brakes go, this one was far less obnoxious than expected. Normally, they are the first thing I replace on my rifles, generally with a military-grade flash suppressor of some sort. But with this brake, no muzzle blast came back toward me or hit the ground. I wouldn’t exactly want to be next to the gun in a fight, as it’s loud, but it mitigates recoil quite well. There was no fireball, so it seems to mitigate flash, too. Overall, the brake is about as good as these get.

The stock locked in place and never moved. Like any AK, the Galil ACE can be operated with the stock folded, and since it folds to the right side, you can still operate the charging handle.

The handguard was never hot to the touch, even after several rapid-fire strings. If you run 10 rounds fast, you’ll notice some excess powder and gas, but it’s similar to a 7.62mm AR. 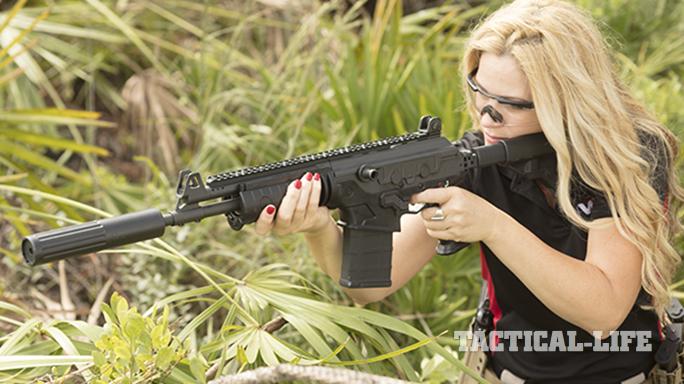 The Galil ACE was reliable with several types of ammunition and every magazine I used. It’s hard on brass, though, denting almost every case mouth. It’s designed to be a combat rifle, not a target rifle, so if you plan to reload the brass, prepare accordingly. It works well with Hornady’s Steel Match ammo because that’s fire-and-forget stuff. Also, the ergonomics have been improved significantly. The ambidextrous controls and left-side charging handle make the Galil ACE easy to run hard and fast.

Assembled in the United States using some imported parts, 922r regulations apply, so it’s important to use U.S.-made magazines. I’m not sure many foreign magazines are out there, but if so, another imported part would need to be replaced. It would be nice to see some QD sling swivels like those on the Tavor, but that’s not insurmountable. The rifle performed well with optics and in a barebones configuration. My old-school mentality will keep it slim and trim, but it holds its own with an optic and a bipod.

As you can probably tell, I like this rifle. Using an AK-style action, it’s reliable and soft shooting, and the accuracy was excellent compared to those of similar systems. The Galil ACE ate everything it was fed, using almost every magazine on the market and flinging brass with authority. It’s probably not your best choice for a precision match, but it’s an excellent choice if you need a 7.62mm for home defense or as a working gun.