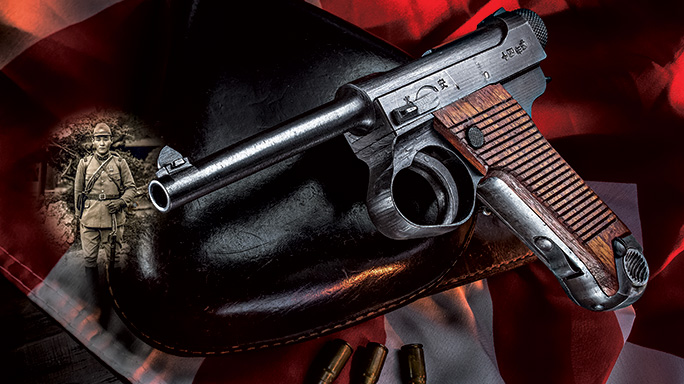 1 of 7
Gun Review: The Japanese Nambu Pistol
The Type 14 was the most common Japanese military handgun. 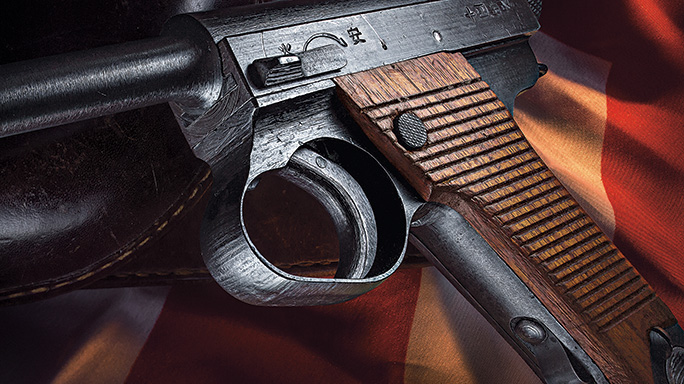 2 of 7
Gun Review: The Japanese Nambu Pistol
The safety lever was located on the left side, above the trigger, while the magazine release was inletted into the wooden grip panel. Note the Second Model-style triggerguard. 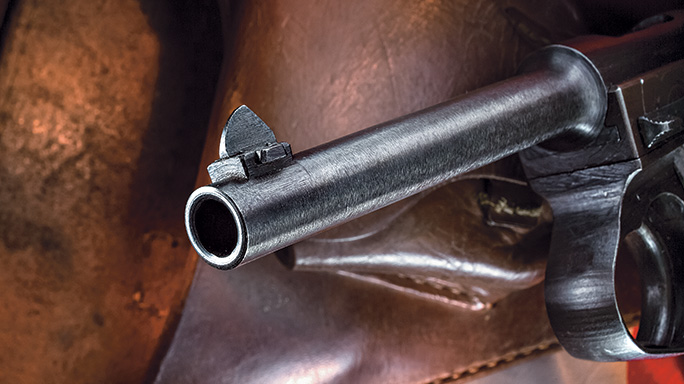 3 of 7
Gun Review: The Japanese Nambu Pistol
The Type 14’s front sight, attached directly to the barrel, was a simple, tall blade that could be adjusted for windage. 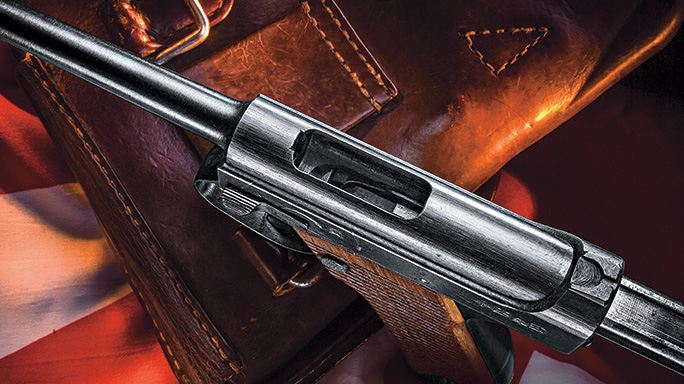 4 of 7
Gun Review: The Japanese Nambu Pistol
The Type 14’s ejection port was on top of the receiver. Spent cases were ejected straight up. 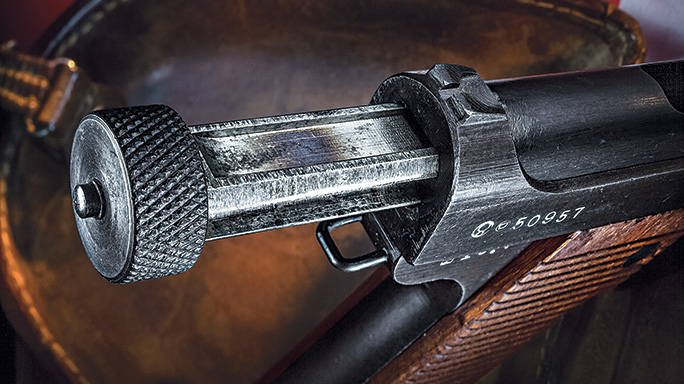 5 of 7
Gun Review: The Japanese Nambu Pistol
The knurled cocking knob denotes that this is a later-production pistol. Note the large lanyard ring and rather small rear sight. 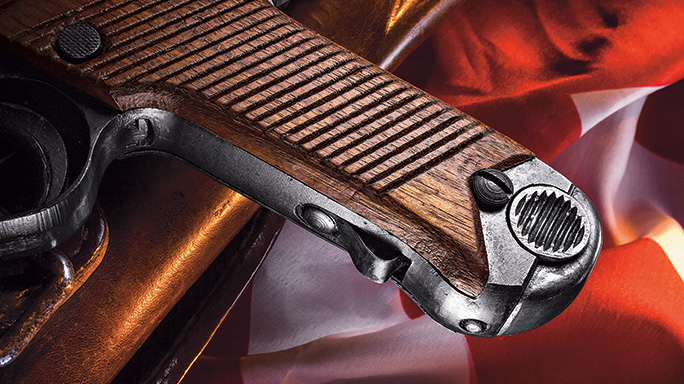 6 of 7
Gun Review: The Japanese Nambu Pistol
The Type 14’s magazine retention spring is part of the frontstrap. Also visible is the grooved, aluminum magazine baseplate. 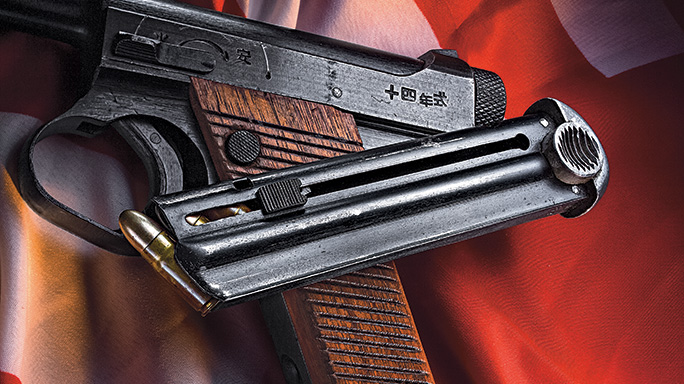 7 of 7
Gun Review: The Japanese Nambu Pistol
The single-stack magazine held eight rounds of 8mm Type 14 ammo, which consisted of a bottlenecked case and a 102-grain FMJ bullet. 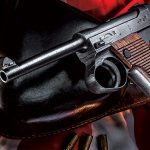 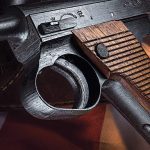 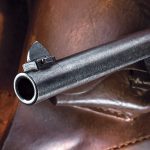 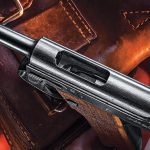 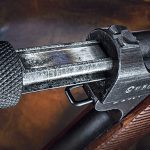 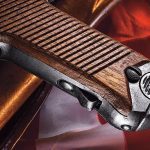 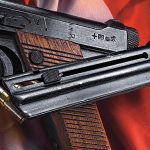 In the last half of the 19th century, the island nation of Japan made a rapid transition from a medieval-like feudal society to a modern, industrial nation state with imperialistic aspirations. In this short span of time the country’s army went from samurai warriors armed with swords, bows and matchlock muskets to a European-style force that, by the 1890s, was armed with modern repeating firearms.

During this transition, Japan relied heavily upon European and American assistance in modernizing its armed forces. As they would become famous for doing in later years, the Japanese looked abroad and found what they felt were the best products and adapted them.

With the results of the Franco-Prussian War influencing their decision, the Imperial Army’s General Staff hired a cadre of German advisors, and by fusing their native samurai traditions with German-style militarism, they created a highly organized and motivated army that would make Japan a threat to the continuing European, Russian and American dominance of Asia and the Pacific.

Although the Japanese were quick to take advantage of any and all developments in the area of military rifles, they showed a lack of interest in handguns. Part of this can be attributed to adherence by the officer class to the samurai tradition in which officers traditionally went into battle equipped with only a sword. If an army officer wished to carry a handgun, he was required to purchase one privately.

While most 19th century Japanese officers may have disdained handguns, a modern army had a definite need for them. Cavalry troopers, buglers, mounted messengers, military police, artillery crews, transport drivers, naval landing parties, etc., all needed a lightweight, handy weapon for personal protection—and the revolver suited this purpose to perfection. To meet this need, between 1877 and 1896 substantial numbers of Smith & Wesson revolvers—all in .44 Russian caliber—were purchased by both the army and navy.

But national prestige demanded that the country’s armed forces be equipped with weapons of native design and manufacture. So, after several years of development and trials, the Meiji 26 Nen Shiki Ken Ju, more commonly known as the Type 26 revolver, was adopted in 1893. (Note: In designating military firearms, the Japanese used the year of the reign, or “era,” of the current emperor the weapon was approved during. The Type 26 revolver was approved for service during the 26th year of the Meiji era, which was 1893).

Designed at the Koishikawa arsenal, the Type 26 was a hinged-frame, six-shot revolver intended for issue to enlisted personnel, non-commissioned officers and low-ranking officers whose duties required some sort of sidearm. It was chambered for a 9mm cartridge of uninspiring ballistics and production continued into the 1920s, though they were still issued to Japanese troops as late as World War II.

Japanese firearm design was practically the private preserve of two men: Colonel Nariakira Arisaka and Captain (later Lieutenant General) Kijiro Nambu. Arisaka is best known for his bolt-action rifles that equipped the Imperial forces from 1899 to 1945, while Nambu is recognized as Japan’s premier designer of semi-automatic pistols and machine guns.

In 1897, Captain Nambu was assigned to the Koishikawa arsenal, where, between 1902 and 1904, he perfected his first semi-automatic pistol. While its shape was reminiscent of the Luger/Parabellum pistol, it used a pivoting-block locking system.

Upon firing, the barrel extension and separate bolt move rearward together until the barrel strikes the barrel stop. At this point the locking block reaches a cut in the receiver and cams downward into it, unlocking the bolt from the barrel. The bolt continues to the rear, extracting and ejecting the spent cartridge case and compressing the recoil spring located in a housing on the left side of the frame. The spring then pulls the bolt forward, stripping the next round out of the magazine and chambering it. The bolt pushes the barrel extension forward, allowing the locking block to pivot up, locking into the underside of the bolt as it goes into battery. A trigger disconnect prevents the pistol from firing unless the bolt is locked in the forward position.

The only manual safety device was a grip safety located on the front of the grip frame, which blocked trigger movement unless it was held in. A release for the eight-round magazine was located behind the triggerguard on the left side of the grip.

Known officially as the Nambu Shiki Jido Kenju “Ko” (Nambu Automatic Pistol Type A), it was referred to variously as the Model 1904, Type Nambu (Large) or “Grandpa” Nambu. Production began in 1906, and while the army never adopted it, many officers purchased them privately and the navy obtained numbers of them. Navy production was led by a private concern, the Tokyo Gas & Electric Company.

Captain Nambu also designed the cartridge for his pistol, the 8mm Nambu. This consisted of a rimless, bottlenecked case 21mm in length whose 102-grain full-metal-jacket (FMJ) bullet was propelled to a velocity of approximately 960 fps. In 1927, the army adopted the Type 14 pistol, leading to the cartridge’s official designation “8mm Type 14.”

As were many early semi-auto military pistols, the Model 1904 pistol could be ordered with the option of a wooden holster/shoulder stock, which had a telescoping nose section that was extended before attaching it to a slot in the butt of the pistol. As was SOP with shoulder-stocked pistols, the Nambu sported a tangent rear sight that was adjustable from 100 to (a wildly optimistic) 500 meters.

Within a few years, Nambu had modified the original pistol by changing the shape and size of the trigger, adding a swiveling lanyard ring on the rear of the frame and replacing the wooden magazine base with those made from aluminum. While the Japanese Navy referred to them as “Army Type Automatic Pistol” and “Type 4 Automatic Pistol,” they are known to collectors today as the “Papa” Nambu. Between the world wars, Siam (Thailand), a perennial customer of Japanese arsenals, purchased numbers of both types of pistols while others were provided to pro-Japanese factions in China.

Heeding requests from high-ranking officers for a smaller, lighter pistol, Nambu designed the Shiki Jido Kenju “Otsu,” the so-called “Baby” Nambu. This was an exact copy that was approximately 75 percent the size and weight of the larger pistol and fired a special cartridge. Production of the “Papa” and “Baby” pistols continued until 1927 at Koishikawa and until 1932 at Tokyo Gas & Electric Company.

The 7mm Nambu cartridge of the pistol consisted of a rimless, bottlenecked case 20mm long whose minuscule 56-grain FMJ bullet achieved a reported velocity of 1,200 fps. As a combat handgun it was a joke but, because of its high price tag, it was a status symbol for more affluent officers who could afford one. Japanese officers also purchased large numbers of foreign pistols from dealers and officers’ cooperatives. These were mostly 7.65mm (.32 ACP) automatics, with German and American brands being the most popular.

Between 1916 and 1921, Nambu modified his pistol in order to make it simpler and cheaper to produce, and in 1927 the Japanese Imperial Army officially adopted the improved model as the 14 Nen Shiki Jenju (Type 14 Pistol). It had the same general outline of the “Papa” Nambu but used a simplified bolt, locking block, safety, magazine and dual recoil springs on either side of the bolt. Additionally, a rotating safety lever was mounted on the left side of the frame above the trigger, while a magazine retention spring in the frontstrap prevented inadvertent loss of that important component.

While a number of minor variations of the Type 14 exist, the two most common are the so-called First and Second Models. These differ primarily in that the Second Model features a larger triggerguard, which makes the pistol easier to operate when wearing gloves.

Type 14s were manufactured by government arsenals at Koishikawa/Kokura, Nagoya and by a private firm set up by General Nambu after he retired from the army, the Nambu Rifle Company (later known as Chuo Kogyo Co., Ltd.). More than 280,000 units were produced by 1945, making it the most common of all Japanese military handguns.

As the war dragged on, Japanese arsenals modified weapons for more rapid and cheaper production, and the Type 14 was no exception. Quality of fit and finish deteriorated: The grooved cocking knob was replaced by one with fine (and later coarse) knurling, the magazine retaining spring was often deleted, and they were fitted with grip panels of plain, unfinished wood.

After he had opened his own factory in the 1930s, Nambu was approached by the Japanese Imperial Army with a request for a smaller, lighter pistol for air crews, tank crews, paratroopers and other specialist troops, with speed and cheapness of manufacture being the utmost priorities.

Designated the Type 94, the new pistol used a reciprocating tubular slide with a separate breechblock and a recoil spring that surrounded the barrel. There are no slide rails on the frame, and the slide and barrel are held in place, and reciprocate on, two upward frame projections above the triggerguard and a bridge at the rear that is integral with the frame. Its oddly shaped grip decreased bulk and better fit the small hands of the average Japanese soldier.

Type 94s are notable for their exposed sear bar on the left side of the frame; any pressure on the front of this piece will fire the pistol without the trigger being pulled. This caused U.S. troops to bestow the nickname “Suicide Special” upon it.

The quality of late-production Type 94s was abysmal, with many being issued with no finish, raw wood grips and “non-essential” components deleted to speed up production. In excess of 71,000 units were produced by the end of the war.

Aside from military use by Japan, all models of Nambu pistols saw service with the armies of Thailand and China. Both communist and nationalist Chinese forces captured numbers of them during WWII, which were supplemented with the vast quantities of arms surrendered by the Japanese at the end of the conflict. All sorts of ex-Japanese weaponry saw service in the Korean War with communist Chinese and North Korean forces. Others saw service with Indonesian nationalist guerillas during their fight for independence from the Netherlands.

While I found the Type 14 a fascinating weapon, it displayed enough shortcomings that I really cannot understand why it was adopted by one of the world’s most prominent military powers. Perhaps national pride? But, while I’d much rather have had an FN Hi-Power or a Walther P.38 for combat any day, the Type 14 does make for an interesting collectible! 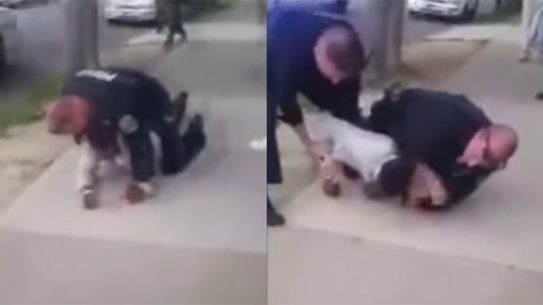 Buffalo police officer accused of choking suspect was actually saving him from choking on...