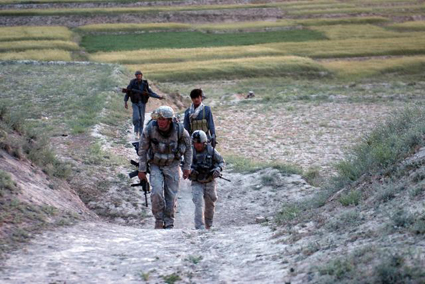 The Soldiers patrol local villages nearly every day, typically with Afghan security forces by their side.

“Seventy percent of our operations are joint operations with the Afghan National Army,” said Staff Sgt. Shawn Evans, a squad leader with 1st Platoon, Battle Company, 1st Battalion, 32nd Infantry Regiment, attached to Cherokee Troop, 3-71. “Our primary task here is to legitimize the Afghan government, and the main way to do that is to put the [Afghan National Army] on point.”

To ensure the safety of U.S. and Afghan forces, hours of training are put in before every mission.

“We usually spend a few days before each mission going over our plan of action, as well as basic combat skills with the [Afghan forces] before we actually go out,” Evans said. “Most of them have good training already; it’s just a matter of letting them step forward and use it.”

“In order to bring security, safety and peace to Afghanistan, we need to assist the [Afghan security forces] in perfecting their battle abilities,” he said.

The joint forces are making an impact, Evans noted.

“Last mission we did, we brought a squad and a platoon leader from the [Afghan National Army] with us,” he said. “We went out into one of the villages to talk to local elders. We had only planned on the [Afghan forces] working with us for additional security, but they split off and were very proactive.”

The Afghan unit met with local elders, and the people treated them as part of a legitimate government, Evans said. He called it “a big step in a remote area like this, where the people know very little of their government.”

Combat arms Soldiers often are stereotyped as being all about “guts and glory,” but with the constantly changing battlefield in Afghanistan, that mentality is changing quickly.

“It’s easy to focus on the kinetic things we do,” Evans said. “But we aren’t going to win this by winning gun fights. We need to work on helping bolster the government from the ground up.”