On March 27, Obama announced his plan to increase U.S. support to Afghanistan and Pakistan to defeat terrorist groups in the region and to provide security and a better quality of life for residents. The president also directed the deployment of 4,000 extra U.S. troops to Afghanistan to train Afghan soldiers and police.

The president’s Afghanistan strategy, Jones said on the CBS program “Face the Nation,” looks toward an expanded Afghan military and constabulary to assume security duties eventually. The three-pronged strategy, he said, also identifies the need for U.S. and allied assistance to bolster Afghanistan’s economic development and improve governance.

“This strategy merges all of those three things,” Jones said. “We’re definitely going to – in conjunction with our allies – develop the Afghan army at a faster rate, and the Afghan police, so that we can have Afghans in charge of their own destiny in a shorter period of time.”

Before the president’s strategy review, 17,000 additional U.S. troops were approved for deployment to southern Afghanistan. Some of those troops are mentoring Afghan soldiers and police, while others are confronting Taliban militants and al-Qaida terrorists.

Army Gen. Stanley A. McChrystal, the senior U.S. military officer in Afghanistan and commander of NATO forces there, is working on an assessment to determine what is required to implement Obama’s strategy. About 58,000 U.S. forces are in Afghanistan now, and that number is expected to increase to about 68,000 troops later this year. About 39,000 NATO troops are serving in Afghanistan.

“The Defense Department will evaluate what General McChrystal has to say,” Jones said, “and, in due time, it’ll come up for a decision by the president.”

Jones also reported that “the instruments of security are being well thought out” for Afghan presidential and provincial elections scheduled Aug. 20.

Obama’s strategy addresses Pakistan as well as Afghanistan, Jones said, citing Pakistan’s recent successes in fighting insurgents in its isolated, northwest regions and along its border with Afghanistan. 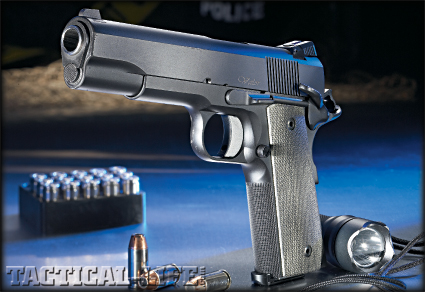 The Dan Wesson Valor .45 ACP is an all business combat 1911 handgun without...