0
SHARES
49
VIEWS
Share on FacebookShare on Twitter
With a reputation like JP Enterprises’, the PSC-11 lives up to its predecessors’ ability for first-shot accuracy, and it definitely has the ability to pile bullets into tight groups when it runs hot, too.

When I first held JP Enterprises’ new PSC-11 rifle in my hands last year, my first thought was that somebody left one of their JPE CTR-02s and an LRP-07 in a dark corner of the shop, put on some mood music and let nature take its course. In reality, John Paul, the owner of JP Enterprises, listened to requests from shooters who wanted a high-quality, accurate AR upper to fit their lower receivers. It wasn’t too much of a stretch to take the best features of the LRP-07 and blend them with a CTR-02 to create the new rifle. 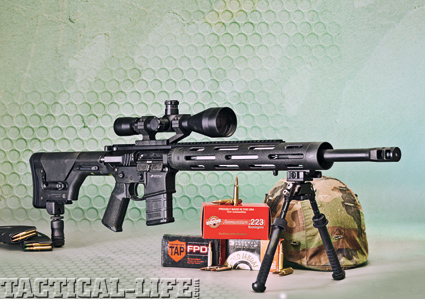 “With the introduction of our new SCR-11 platform, we knew serious shooters would want to incorporate the JP side-charge system into their existing small-frame gas gun,” John Paul said. “That’s why we are introduced the new PSC-11 in 2011. This upper combines all the great features and performance of the new SCR-11 in a package that is cross-compatible with any standard lower receiver on the market. This new upper system is designed for the all-out tactical market with redundant side and top charging systems, dust cover, forward assist and an optional key-slot gas plug for those running suppressed systems.”

Gun Details
The PSC-11 tested for this article was the optional complete rifle JP Enterprises builds on a forged JP-15 lower. The SCR-11, like all JP rifles, achieves performance and accuracy gains in the exact opposite way that many run-of-the-mill AR-15-style rifles lose their ability to shoot tight groups. Tolerance stacking between assembled parts can make for a gun that is “on the loose” when assembled. If a manufacturer uses tooling that mills parts at the largest end of their tolerance range and assembles them, the parts will have play between them. When a shot breaks, a rifle built loosely will undergo accuracy-robbing harmonics. 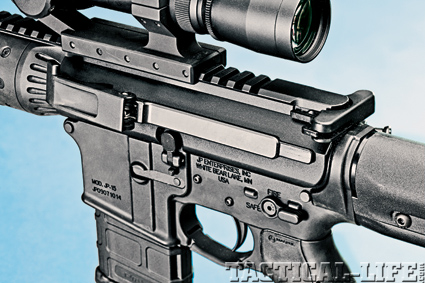 Shoulder-mounted charging is quick and easy with JPE’s side-charge system, but if you’re a traditionalist, it still has a standard AR charging handle.