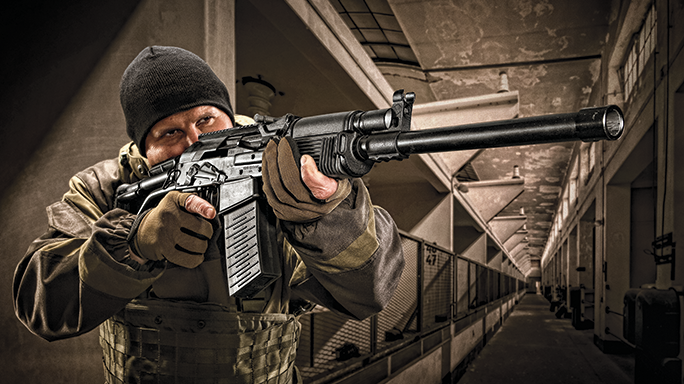 1 of 6
Photo by Straight 8
VEPR-12: K-VAR’s Close-Quarters Semi-Auto Shotgun
FIME and K-VAR have teamed up to offer an amazing semi-auto VEPR-12 shotgun with a folding stock and AK-style handling to dominate in close quarters. 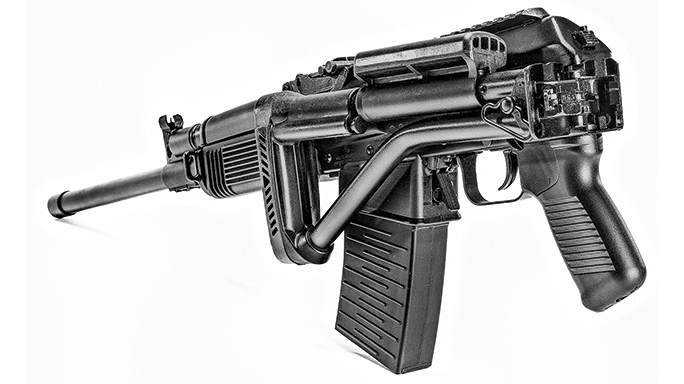 2 of 6
Photo by Straight 8
VEPR-12: K-VAR’s Close-Quarters Semi-Auto Shotgun
The folding stock sports a lightly padded, rotating cheekpiece and a thick rubber buttpad to help absorb some of the recoil. 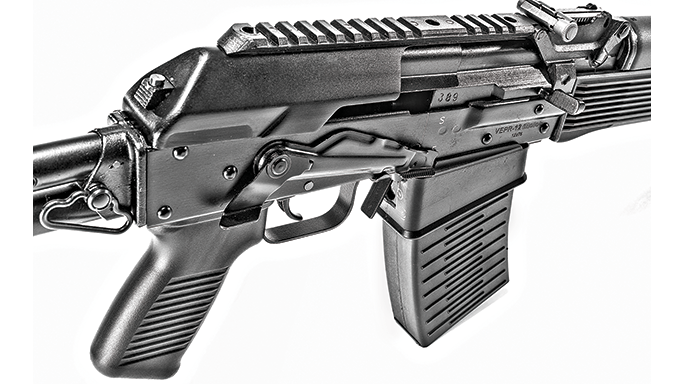 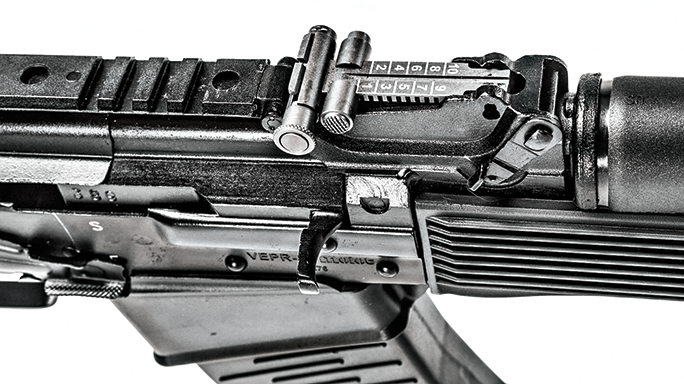 4 of 6
Photo by Straight 8
VEPR-12: K-VAR’s Close-Quarters Semi-Auto Shotgun
The shotgun’s adjustable rear sight ladder is marked to a rather optimistic 1,000 yards. 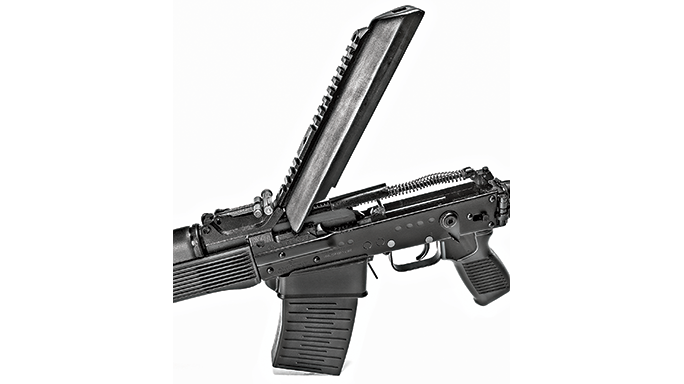 5 of 6
Photo by Straight 8
VEPR-12: K-VAR’s Close-Quarters Semi-Auto Shotgun
The top cover lifts out of the way for easy access to all essential components. 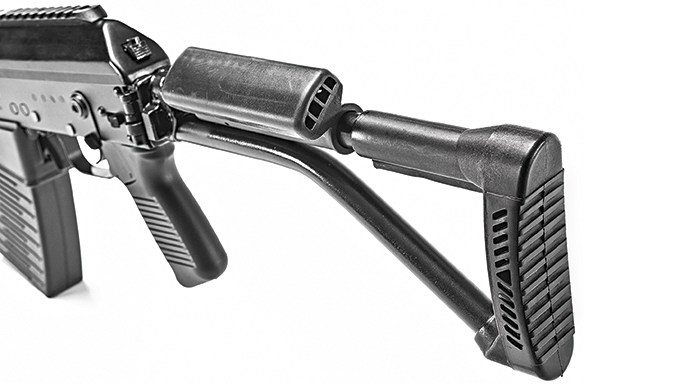 6 of 6
Photo by Straight 8
VEPR-12: K-VAR’s Close-Quarters Semi-Auto Shotgun
The folding stock sports a lightly padded, rotating cheekpiece and a thick rubber buttpad to help absorb some of the recoil. 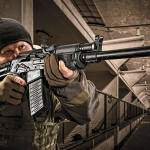 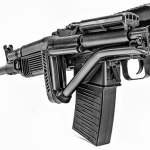 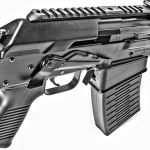 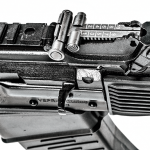 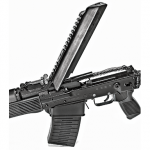 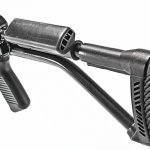 Available only from K-VAR, which bills it as “the finest personal protection shotgun in the world,” the newest version of the Molot-based Vepr is built by the FIME Group in Las Vegas, which modifies the Russian gun as imported into a form that allows it to conform to federal sales restrictions in the U.S. AK shotguns from Molot and Saiga have been offered before, but this is the first time one’s been sold with a fully functional side-folding stock, and the FIME/K-VAR partnership is the only source if you want a folder on this AK variant. BATFE frowns severely on importing certain guns with folding stocks. Previously, the Molot imports were either sold with a wooden thumbhole stock or had “folders” welded permanently in the open position for U.S. sales.

The key to the whole fuss over that folder lies in the distinction between “foreign” and “domestic” manufacture. In government terminology and context, it boils down to meeting the requirements of Title 18, Chapter 44, Section 922r of the United States Code, which prohibits folders on imported non-sporting shotguns (among other things), and/or adding a folder to such an import in otherwise original form once it crosses the border.

Essentially (and confusingly), the gun has to ditch the prohibited feature to get in and remain in that “neutered” import configuration after it does, or be modified to retain no more than 10 of the original listed parts that came on or in the gun to allow a folder on it. In other words, it would be illegal to import the VEPR-12 with a functional folder, or to add one after it passes customs without swapping enough U.S.-made parts into it to be legally considered a “domestically manufactured” gun. Clear as mud? That’s your taxes working hard for you there.

In this VEPR-12, FIME replaces certain Russian parts with U.S. versions, including the RPK-styled polymer handguards, the polymer pistol grip, the trigger, the hammer, the disconnector and the gas piston puck. Those are all manufactured by Arsenal, Inc. Once installed, the VEPR-12 is considered a “domestic” product, the import-configuration stock is converted to a fully functional folder and off it goes to K-VAR for distribution and sales.

The VEPR-12 is a solid piece of ordnance, and the Kalashnikov adaptation is very well done. Weighing in at 6.85 pounds empty with a stamped receiver and a 19-inch barrel, the profile is familiar, and its operation should transfer easily for any AK rifle user. If you’re not previously an AK shooter, one major advantage this design has over tube-mag semi-autos is that it offers a very non-complicated drill to run it. Insert a loaded magazine, cycle the bolt to load the chamber, pull the trigger. Another advantage is the box magazine reloading (five at once, instead of one at a time), and, of course, the compact transport that the folder adds.

With a gas-piston action modified to 12-gauge dimensions, the VEPR-12 features basic AK controls—a right-side stamped safety that swivels up to cover the ejection port when activated, a paddle magazine release between the mag well and triggerguard, and battle sights graduated from 100 to 1,000 yards at the rear to mate with the classic front post protected inside two steel ears. The gas tube rides above the barrel, the fire control group contains a single-hook trigger and

the shotgun ships with a sturdy, detachable, five-round, polymer box magazine. The breakdown process for cleaning is mostly standard AK: Open the action cover and everything that needs attention is accessible in three seconds.

Kalashnikov designed his famous rifle in an era when ergonomics were not a part of the equation. The AK is not known for speedy manipulation and conveniently positioned controls, falling far short of its arch nemesis, the AR-15, but that doesn’t mean it can’t be improved on, and in this military-grade shotgun that’s exactly what FIME has done. Note that I said “military grade,” not merely “military style.” There’s a world of difference between those two descriptors.

Starting up front, that chrome-lined, 19-inch barrel comes threaded for use with an optional compensator or suppressor. The weight and gas action of the VEPR-12 already work well together to make the gun a relatively soft shooter, but a compensator could come in very handy for those who like to take full advantage of the 3-inch chamber, and it accommodates other add-ons like flash and sound suppressors. A thread-protector cap is also included.

The front sight is pure AK, a post adjustable for elevation by screwing up or down for fine adjustments and for windage by using an adjustment tool to migrate it left or right in the tower. But the rear sight is a modified version with a quick-adjust rotating windage knob on the right that moves the sight blade left or right in repeatable locking increments. Pull the knob out against spring-loaded pressure, rotate to the nearest notch increment, release and it’s locked in place. No tools are needed, and it’s very fast and stays put once you find your center zero. The tangent sight base is conventional, with the usual forward slider for normal distance increments.

The steel action cover is hinged at the front and un-losable if you clean the gun in the field, and unlike most AK-pattern covers, it’s sufficiently wobble free to make an optic genuinely usable when mounted on the alloy Picatinny rail that’s riveted on top. The cover’s latch is beefed up for added insurance by a small spring-loaded button on top that blocks the latch from going forward, unless the button’s depressed. This all combines for a very strong cover attachment, with or without an accessory on the rail.

Under the gaping ejection port, the box mag slides up inside a mag well guide extension for very quick no-fumble/no-rock insertions, and the paddle drops it free and clear when pushed. One much-appreciated mod on this AK variant is the last-round bolt lock that the original AK rifle did not have; the big magazine’s follower locks the bolt open when you’ve shot it dry. A related bonus is the manual bolt-lock button just behind the mag paddle that enables you to lock the bolt open without a magazine inserted.

Another AK upgrade is the safety, which is a Kalashnikov component that nobody’s ever praised for its ergonomics. On this shotgun, a lower arm has been added to the rear of the stamped-steel safety on the right side, which lets a right-hander’s trigger finger switch it on or off, all without fully removing either hand from its firing position. The left side has half of an ambi safety setup—it can be thumbed on with the right-hand thumb without leaving the pistol grip, but not back off. Most new AKs typically incorporate a very stiff safety, at least until it wears its channel arc in the receiver’s surface with use, and the VEPR-12 is no exception. Out of the box, those safety upgrades can be used, but they’ll take some effort.

The pistol grip is reassuringly large, solid and well rounded with no hotspots. Sling use is always an issue on a folder, and here there are two opposing attachment slot tabs at the front end of the handguard and one wire swivel on the right side of the stock between the cheekpiece and the VEPR-12’s receiver. “Rock solid” would be an accurate descriptor for how well the stock locks in place, and it hinges to the left by pushing a strongly spring-loaded button located on the receiver’s left side, just above the pistol grip, forward to unlock it. To unlock it from its folded position and open up again, you push a latch-release button just inside the back of the receiver.

On the upper tube of the beefy stock, a very lightly padded, rotating, 4.25-inch cheekpiece offers a choice of four positions for right- or left-handed use, or to be kept out of the way entirely. It’s held securely in whichever position slot you use by a large plunger bearing against it at its rear, but it moves easily if needed. And at the back end there’s a ventilated, hard rubber recoil pad.

In the old stone quarry, I ran five loads through the VEPR-12 for patterning at 15 yards. The first, and tightest, was Federal’s LE 12700 that showed the sights were regulated low and right, which was quickly corrected without tools on the adjustable tangent rear. The gun had no problems in cycling 00 buck in either 2¾- or 3-inch shells. It was the same with the one #4 buck load. Charges ran nine, 12, 15 and 34 pellets, and even the widest spread of the #4 shot held inside a standard B-27 silhouette at that distance, through the cylinder bore choke. Any and all of these loads would have been a fight-stopper, and magnified by the speed of the gas action and the box magazine, this can be one extremely effective defensive or patrol package.

After the heavy-duty stuff, I also fired five rounds each of Federal’s #8 Game Load, Winchester’s #8 AA target load and Remington’s #8 STS target load to see how low the gas system could go. The Federal cycled perfectly, the Winchester did not cycle at all and the Remington cycled but didn’t lock the bolt back on the last shot. This is no knock on the VEPR-12. I didn’t expect it to deal well with target loads; that’s not what it’s built to do. This is just a note to say that if you plan to use lighter (and cheaper) stuff for practice through this gun, try a box before you buy a case.

Finishing up, I fired a quick three-shot group at 50 yards off a rest with Winchester’s Rack Master slug as well as its Super-X Foster-style rifled slug. There were no malfunctions, recoil was tolerable, and with those adjustable sights and the right slug, the gun could easily hit human-sized targets out well beyond 75 yards. Two other things to note are that the cheekpiece is for optics (I couldn’t get down on the sights using it) and that there was marked trigger slap while firing the hotter rounds.

As it comes, and more so with an optional eight-round Molot magazine from K-VAR, the VEPR-12 is built for reliability, speed, quick reloads and serious firepower, all in the classic and easy-to-use-under-stress AK platform that involves none of the complicated ready routines required in other semi-auto shotguns. The folding stock that reduces transport and storage length by a good 10.5 inches goes a long way in justifying the higher cost of this pro-grade equipment at $1,199, and if you drive a cop car, this scattergun would be a serious contender for partner status. 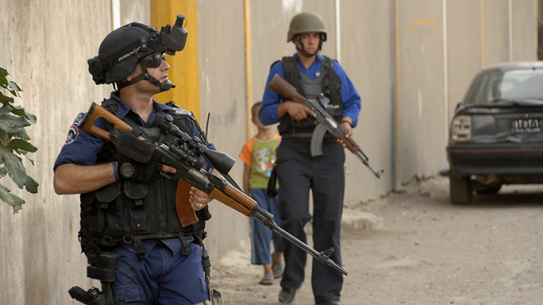 Optics, sights and lasers to maximize your AK’s accuracy.