0
SHARES
45
VIEWS
Share on FacebookShare on Twitter
Ideal for backup and undercover use, the affordable and reliable Kahr CM9 provides officers with 6+1 rounds of powerful 9mm in a very compact package.

When it comes to a backup gun for the LE officer, there is always a seemingly unavoidable balancing act. Do you want ultra-compact size or capable power? Thanks to the new CM9 from Kahr Arms, one does not have to make this difficult choice.

This pistol, a 9mm not much larger than many .380 ACP pistols with a 6+1 capacity, combines Kahr’s excellent quality control with a reasonable price point of $565. The CM9 (or Model CM9093) features an overall length of 5.42 inches, a height of 4 inches and a light 14-ounce weight without the magazine.

There are several key factors as to why Kahr can offer the CM9 at only $517. Most obvious is the polymer frame—unlike the early Kahr pistols that only came with steel frames. Mate that with a conventional barrel having six lands and grooves with a 1-in-10-inch right-hand twist instead of the more expensive polygonal-rifled barrel found on many models. Then add a metal-injection-molded (MIM) slide stop rather than a machined part. Combine that with simpler engraved markings in place of roll markings, and the result is a gun that looks a heck of a lot like the Kahr PM9 (PM9193), with many of the same features, but costing $220 less.

Kahr’s CM9 is an affordable, feature-filled pistol that’s going to appeal to a broad base of legally armed citizens and law enforcement practitioners. Its black polymer frame is strengthened with molded-in 4140 steel inserts, which will allow this pistol to withstand the shooting of thousands of rounds of 9mm ammunition. For its size, it has one of the smoothest- and lightest-feeling trigger pulls I’ve encountered. This is due to a patented “cocking cam trigger system” that employs a cam to both unlock the firing pin block safety and simultaneously complete the cocking and release of the firing pin. 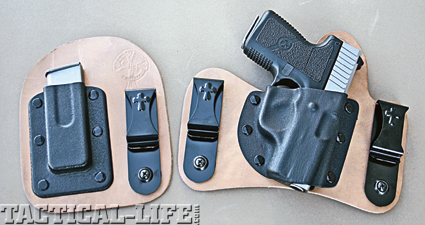 The MiniTuck is a new leather and kydex inside the waistband holster from Crossbreed. It is
lightweight and worked well with the Kahr CM9. William Bell photo

The trigger itself is smooth-faced and 0.63 inches wide, which adds to the silky feel of what might be termed a DAO action and a pull weight of 9 to 11 pounds. It does not have a “two-strike” capability. There are no external safety levers and no magazine safety. The only “controls” are the slide stop and magazine release button on the left side of the frame.
Machined from 416 stainless steel, the slide on the Kahr CM9 has a matte finish and is only 0.9 inches wide. Two Kahr exclusives, an offset recoil lug on the barrel and placement of the internal trigger bar, allow the barrel to fit lower in the frame. This translates into a lower bore axis and, combined with the hammerless design, the shooter’s hand can be placed higher up on the grip frame with a corresponding reduction in felt recoil and muzzle flip. That translates to faster follow-up shots during a rapid-fire shooting situation.
For a pocket pistol, the CM9 is fitted with some outstanding sights. Finished in black, the rear sight is dovetailed into the slide and the leaf has a 0.13-inch notch that is highlighted by a white bar beneath it. Of course, it can be moved laterally within the dovetail for windage adjustments. The front sight is black, with a white dot and is also 0.13 inches in width, and looking through the sights, you get a “bar-dot” configuration. Deep serrations allow a good grasp for cycling the slide, which takes some effort given the pistol’s heavy-duty concentric recoil spring.
The black polymer grip frame is a one-piece affair. The sides of the grip have a knurled texture, while the front- and backstraps have a deep, molded-in checkering pattern. All this combines with the low bore axis to increase controllability in the rapid-fire mode. Keep in mind that the grip frame will only accommodate the middle and ring fingers and there is no shelf on the flush-fitting magazine base for the pinky finger. Not a real problem if you hold a handgun in the proper manner, but remember that this is a 9mm, so you’re going to have to hang on tight. While we’re on the magazine—it is constructed from stainless steel that is plasma-welded and tumbled for smoothness. The polymer follower is powered by a Wolff magazine spring and to help keep the cost down, the CM9 is only supplied with one magazine. Like all Kahr pistols, the CM9 comes in a black polymer carrying case that has compartments for the handgun and a spare magazine. Included are the owner’s manual,
accessories/apparel catalog and other
literature, plus a trigger-locking device.
I had some holsters on hand that would fit a generic selection of small autopistols, but I wanted something special to use with the Kahr CM9, so I contacted Crossbreed Holsters and asked owner Mark Craighead to send me one of their new MiniTuck inside-the-waistband (IWB) holsters. To be honest, I’ve never been a big fan of IWB holsters—they were either so cheaply made that they came out with the gun when drawn or were so bulky that they wouldn’t fit into my trousers with the gun. Some significant weight-loss on my part solved some of that dilemma; the other was improved with IWB designs like the MiniTuck. It is a hybrid (part Kydex, part leather) holster that is slim enough to slide into your waistband, and you can even comfortably add an IWB MicroClip magazine pouch to boot. The thermoplastic holster is riveted to a leather skirt that is fitted with two spring-steel J-hooks that come outside the waistband and clip over the belt for a firm hold. Lots of wear molds the rig to the contours of your body, and the precisely molded holster has a firm friction-fit for retention yet allows rapid presentation.

For my accuracy evaluation, I selected four different factory 9mm loads. The first was from DoubleTap ammunition loaded with 115-grain Barnes TAC-XP solid-copper hollow points (HP) at +P pressure levels, followed by Federal’s Premium LE 124-grain HST HP Tactical cartridge. From the Speer LE Duty Ammunition line came the 124-grain Gold Dot HP, and finally, Winchester’s Supreme Elite PDX1 147-grain JHP Bonded Personal Protection round. All four of these cartridges were fired from a bench-rest position, the target placed at a distance of 7 yards, which is test protocol for handguns of this type.
Keeping in mind that this was a tiny pistol shooting a high-pressure cartridge out of a short barrel, and with a DAO trigger with a pull weight of 9 to 11 pounds, you can bet I wasn’t sure just what to expect accuracy-wise from the Kahr CM9. I have found over the years that a quality-built firearm will generally give better-than-expected performance when the shooter is doing his/her part. I had already warmed up a bit doing some point-of-aim (POA) test shooting and chronographing, so the gun already had its “fouling shots” so to speak. My best group measured 1.35 inches with the Speer ammo, and it also gave me my best average group. Next best was a 1.75-inch group with the Winchester Supreme, but it came in at third place in group averages. None of the group averages were over 2.5 inches, and I judged the CM9 to have excellent accuracy potential. During this test phase, no malfunctions were recorded, the sights were easy to see, and the checkering and knurling on the grip frame and panels helped me to keep control of the little pistol.
My hats off to the Kahr CM9 as an ideal concealment-sized pistol for LE off-duty/back-up use. The company has managed to create a pistol that offers just about everything the LE officer could want in a backup pistol—compact size, good power and an excellent price point.