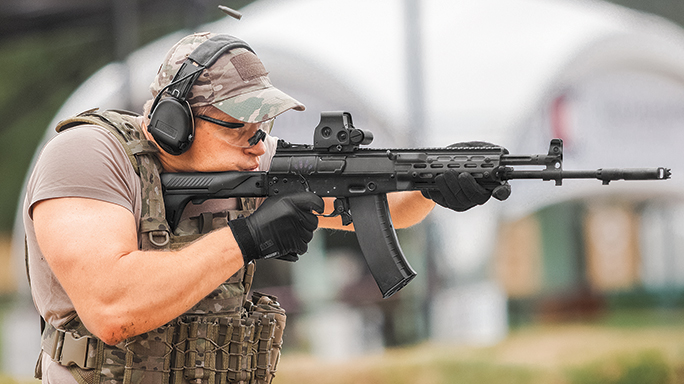 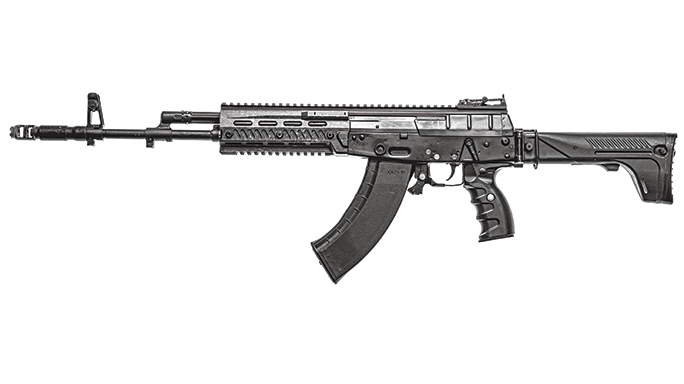 2 of 5
Tomorrow’s AK: Kalashnikov Concern’s AK-12
This AK-12 prototype was produced in 2014 and passed the “Ratnik” trials, with more than 9,000 rounds run through it without a malfunction. 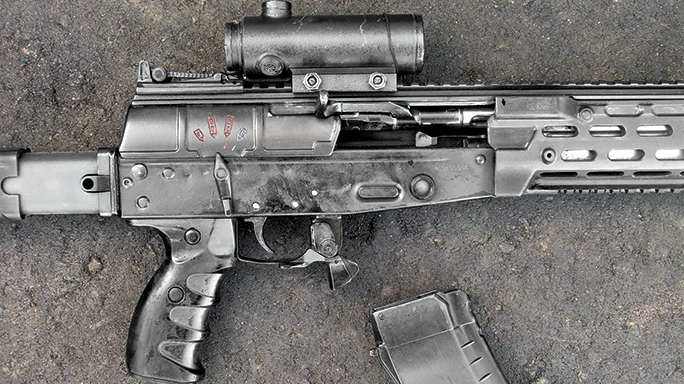 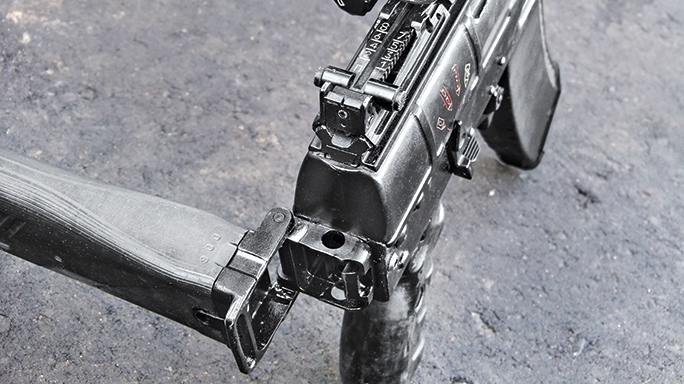 4 of 5
Tomorrow’s AK: Kalashnikov Concern’s AK-12
The rifle features a polymer stock that folds to the left side thanks to a sturdy steel hinge. 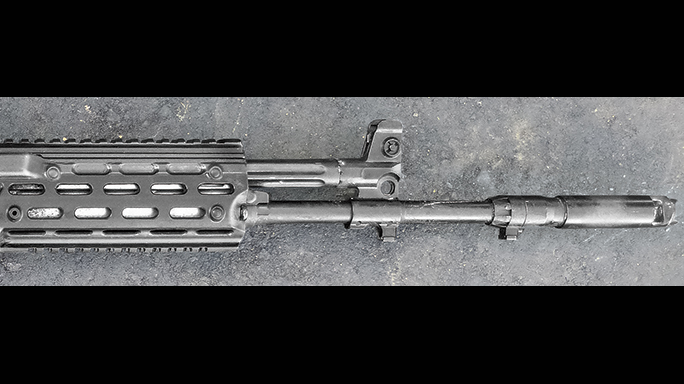 5 of 5
Tomorrow’s AK: Kalashnikov Concern’s AK-12
The current AK-12 sports a railed forend, a gas block with an integral front sight, and a muzzle brake with a bayonet mount. 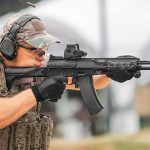 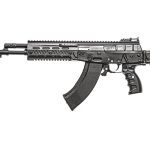 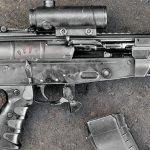 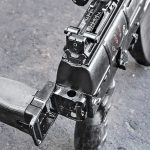 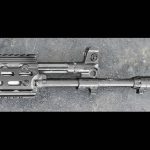 The AK-12 is the newest creation of Kalashnikov Concern (formerly Izhmash). It is intended to replace the older AK-74M and AK-100 rifles for domestic use by the Russian army and law enforcement as well as for export. It was first displayed early in 2012, and today it is in its final stages of development.

The main reason behind this weapon’s development, which was and still is financed through the factory’s own money (as opposed to the usual government-sponsored developments), is that the Russian army has huge stocks of Soviet-era AK-74 rifles, and certain Russian army officials have stated that they do not plan to buy any more newly produced AK-74M rifles in the foreseeable future. As a result, Concern Kalashnikov had to bring out a new rifle that would interest the Russian army enough to warrant its future adoption.

A good opportunity to put the new rifle forward for army consideration came with the “Ratnik” trials. These trials were initially held to procure new combat equipment for Russian special operations and elite assault troops. The small arms portion of the trials was initially written to specifically select “balanced action” 5.45mm AEK-971 and 7.62mm AEK-973 rifles developed by the ZiD factory in Kovrov city. Izhmash, however, entered its 5.45mm AK-12 rifle into the trials at its own risk and through its own funding. The Ratnik trials took several years, and by mid-2015 the Russian army had decided to go ahead and procure weapons from two surviving designs, from both ZiD and Kalashnikov Concern, for extended field trials.

Originally, the AK-12 assault rifle was planned to be offered in two basic versions, “light” and “heavy,” with the former adapted for cartridges like 5.45x39mm, 5.56x45mm, 6.5 Grendel and 7.62x39mm, and the latter using more powerful cartridges like 7.62x51mm NATO. Also, earlier publications suggested the potential development of a whole family of small arms, including compact and full-sized assault rifles, heavy-barreled “squad automatics” (light machine guns), civilian self-loading carbines and shotguns similar in concept to the current Saiga line of semi-autos. However, by this time, only a few of the originally envisioned models made it into production.

Apparently the “heavy” version was shelved alongside the shotgun and semi-autos before any actual work started. Due to limited time and funding, the company’s work centered on the gun that had the most sales potential with the Russian government—a full-sized assault rifle firing standard-issue 5.45x39mm ammo. The 7.62x39mm version of the same gun came a little later, but it seems that the 5.45mm version gets most of the attention from the manufacturer and the Russian army alike.

Right now, the company is working on polishing up the design (especially in regard to plastic furniture, which was 3D printed for the Ratnik trial prototypes) and preparing the initial batch for production. The final fate of this weapon is not yet decided, and it may take a year or even longer before any final official decision is made. According to some sources, right now the AK-12 is viewed as a weapon for the frontline troops. In case of its official adoption by the Russian army, the rear echelon and various non-infantry troops will continue to use older generations of Kalashnikov weapons, including the AK-74M, the AK-74 and, in some cases, even older 7.62mm AKMs.

Another part that was changed is the bolt handle. Early designs had a bolt handle that could be removed from the bolt carrier during disassembly, and be installed on either side of the gun, according to the user’s preferences. In the current design, the charging handle is a separate Z-shaped part that cannot be detached from the bolt group, but can be rotated to either side once the bolt group is removed from the gun. The AK-12’s safety arrangement also changed, and it is still unclear if it reached its final design or not.

Yet another invisible, but important, change included the AK-12 rifle’s rate of fire. According to army requirements, any new guns submitted to the Ratnik trials were to be made with three modes of fire—single, limited burst (two or three rounds) and full-automatic fire. The earliest AK-12 rifles featured two different rates of fire—600 rounds per minute for full-automatic fire and 900 rounds per minute for limited burst fire. Apparently, the increased rate of fire tended to decrease dispersion of two-round bursts, but whatever limited increase in effectiveness it provided was heavily offset by increases in price, complexity and a possible decrease in reliability. As a result, current AK-12 guns have only one rate of fire, the comfortable and controllable 740 rounds per minute. With this rate, the two-round burst mode appears redundant, but apparently the army still insists on this mode.

The AK-12 is a gas-operated, select-fire weapon using a traditional “Kalashnikov type” action with a long-stroke gas piston and a locking rotary bolt. Compared to the AK-74, the bolt group is lighter to decrease recoil and improve accuracy during full-auto fire. The barrel features improved rifling for better accuracy and a revised muzzle brake. The AK-12’s safety/selector levers are located above the pistol grip on both sides of the gun.

When the gun is fired, the charging handle reciprocates along with the bolt. A new side-folding, telescoping, adjustable stock is provided with the AK-12. A long Picatinny rail is located on the top cover, and an additional accessory rail is on the bottom of the handguard. Both sides of the forend are drilled and tapped to accept additional lengths of Picatinny rail, if required. The bottom section of the forend is available in two versions—with a rail (to accept various tactical accessories like lights and foregrips) or a plain one (to accept standard 40mm grenade launchers like the GP-25 or GP-30).

AK-12 assault rifles accepts all legacy magazines in their respective caliber, such as 30-round AKM or AK-74, 40-round RPK and 45-round RPK-74 magazines. Additionally, new double-stack 30-round and quad-stack 60-round box magazines and 95-round drums are planned to be issued for AK-12s chambered in 5.45mm.

The gun features a bolt-hold-open device that is controlled by a lever located at the front of the triggerguard, above the enlarged magazine-release lever. It must be noted that this bolt-hold-open works only with new, modified magazines. An enlarged paddle magazine-release lever is designed to kick the magazine out of the gun when depressed. The AK-12 also features redesigned integral iron sights. A shrouded front sight is installed above the gas block. The adjustable rear sight has a reversible blade with a diopter on one side and a U-shaped notch on another. To switch between these options, the user has to raise the rear sight and then rotate the blade 180 degrees to either side. The rear sight is adjustable for distance between 100 and 800 meters in 100-meter increments.

I had a chance to fire several magazines through the 5.45mm AK-12 rifle during the Army-2015 exhibition. The prototype that I shot was one of the guns that passed the Ratnik trials, and by the start of the exhibition it had fired more than 9,000 rounds. I was told that during the exhibition it would eat at least 1,500 more rounds of ammunition with zero malfunctions, save from one or two misfires due to dud rounds.

I shot the gun off-hand in all three modes. It felt rather comfortable in hand thanks to its better-shaped pistol grip and adjustable shoulder stock, which suits me better than a shorter AK-74 stock (I’m 6 feet tall and have rather long hands). The gun was fitted with a Belarusian red-dot sight that was okay as a sight, but it had a terrible mount with protruding mounting bolts that tended to scratch my hand when I charged the gun.

In single-shot I had no problem hitting steel plates out to 200 meters in rather rapid fire. In full-auto, I had no problem engaging stationary and moving targets at 100 meters, with the rifle feeling very comfortable and controllable.

I was unable to test the AK-12 with iron sights due to there being no quick-detach feature on the red-dot sight mount, but it seems that the iron sights are there mostly for backup purposes. The diopter aperture appears to be rather small, and the U-shaped notch seems to be too close for the eye. Overall, my impressions of the AK-12 were positive, and I’m looking forward to testing a production version of this gun in the near future. 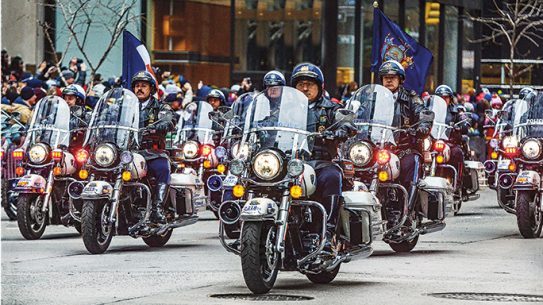 Today’s motorcycles offer cops more power and speed than ever before. 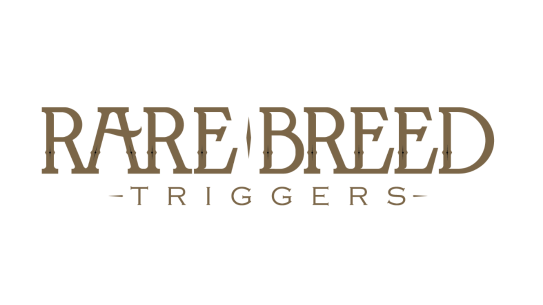 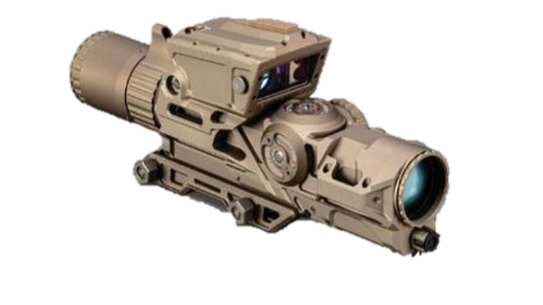 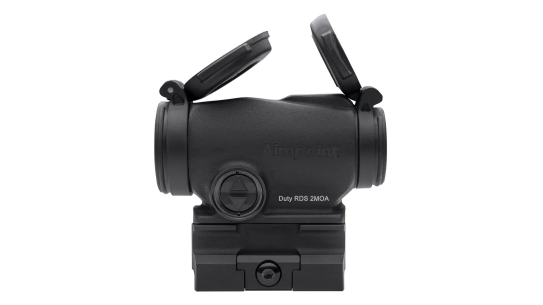 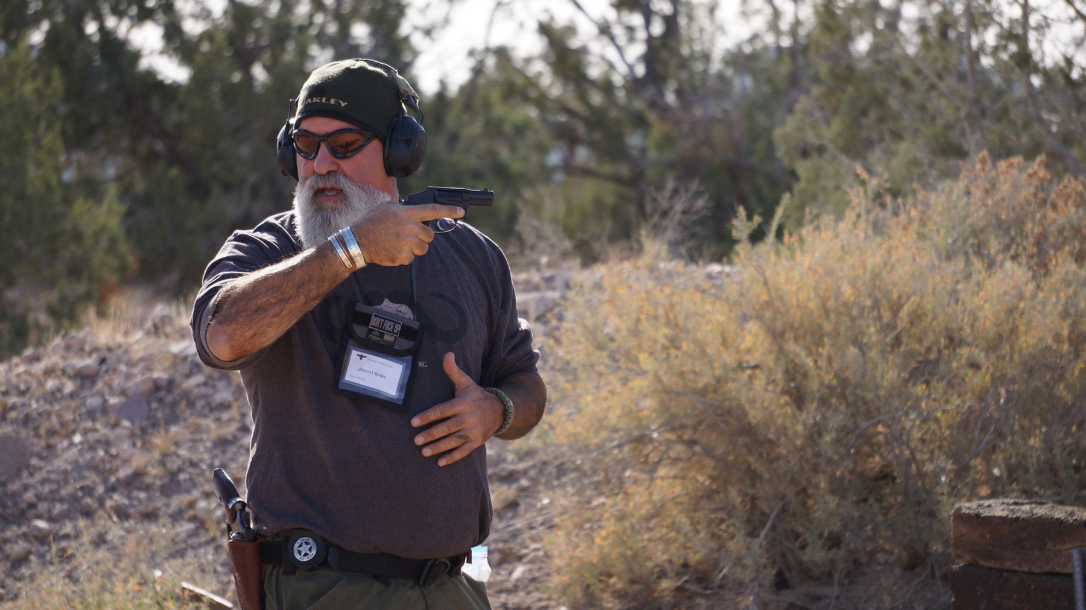 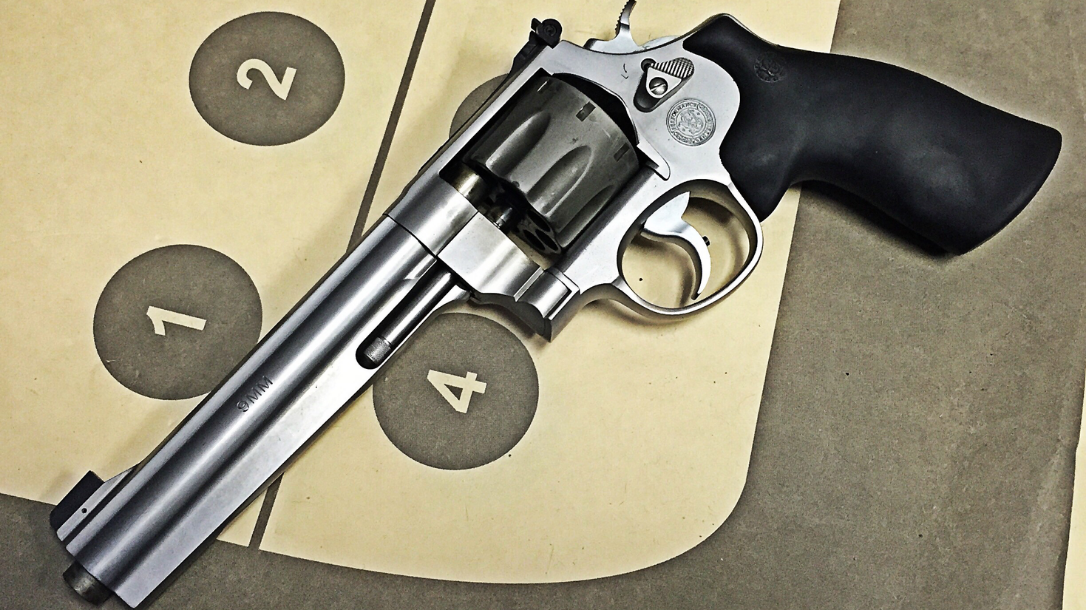 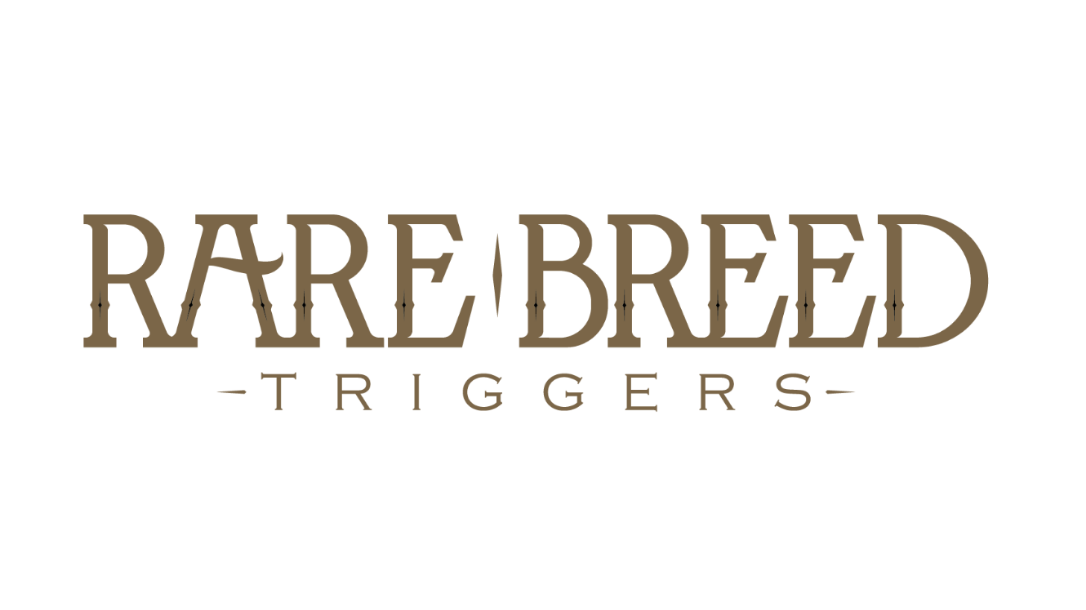 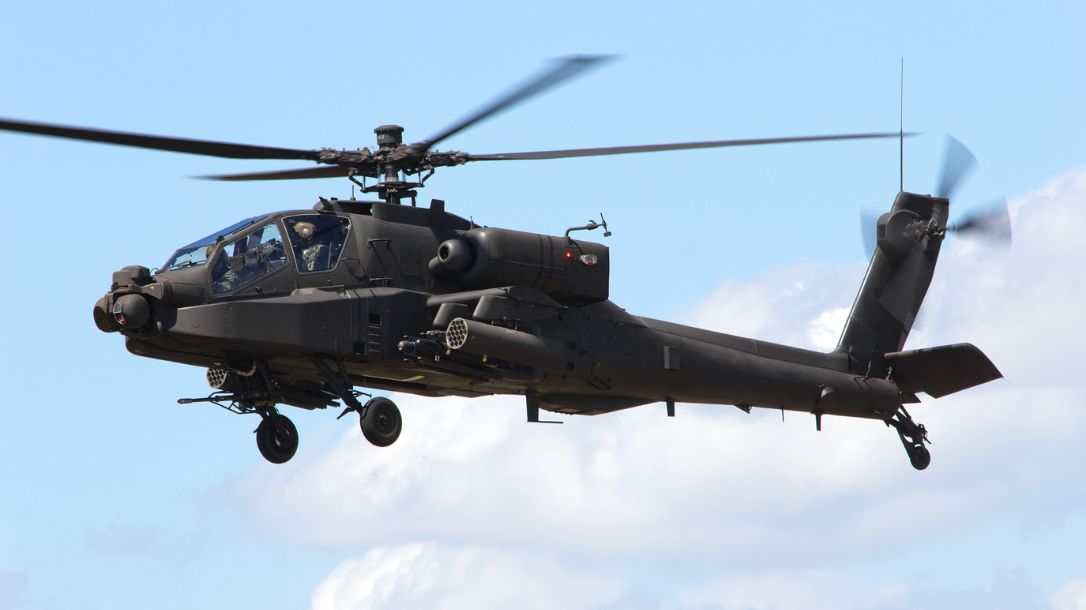 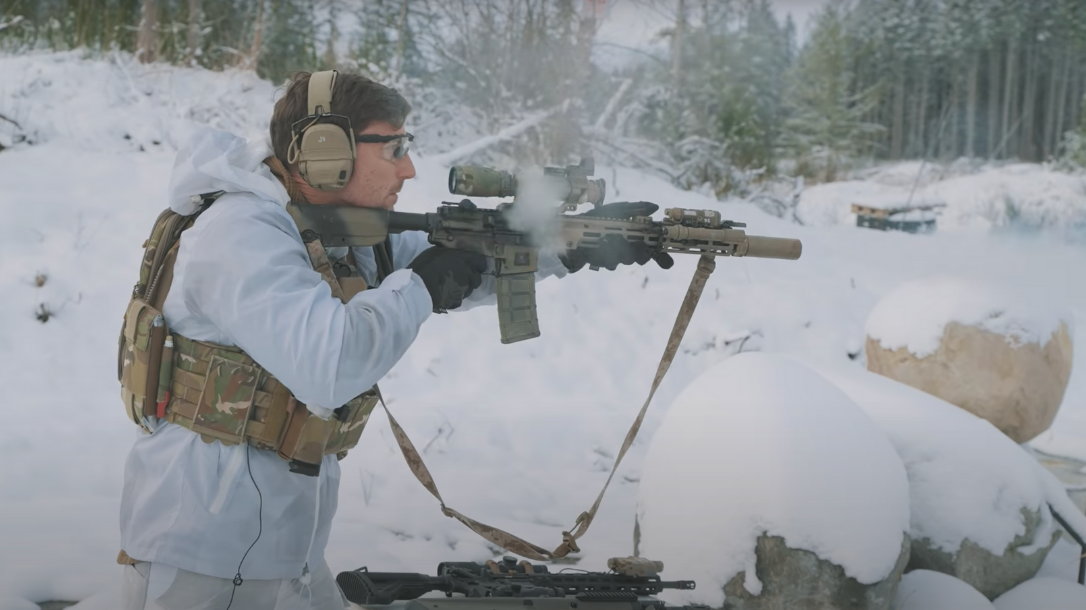 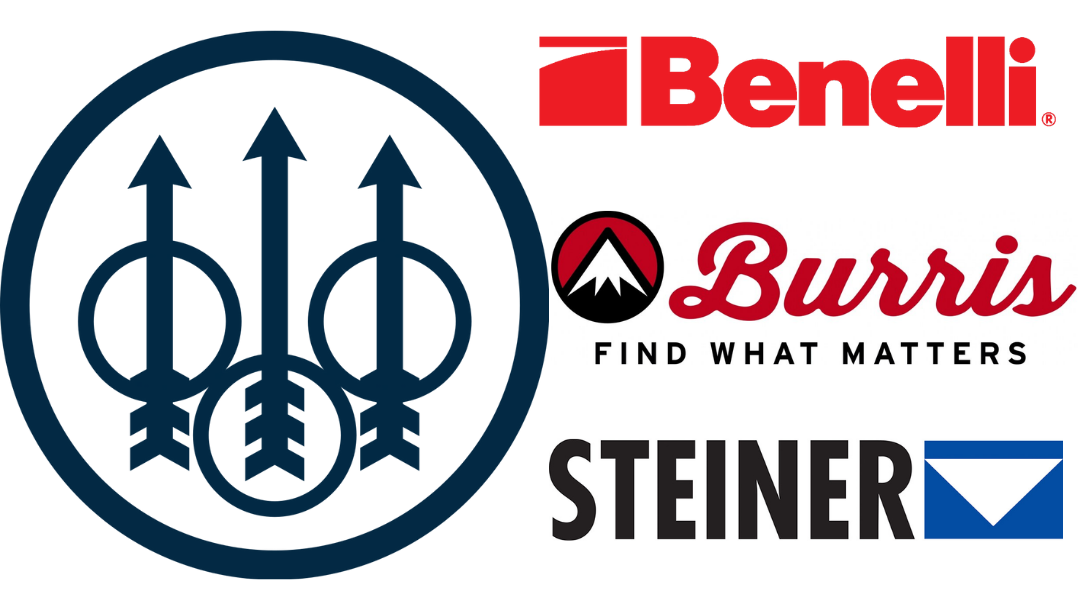 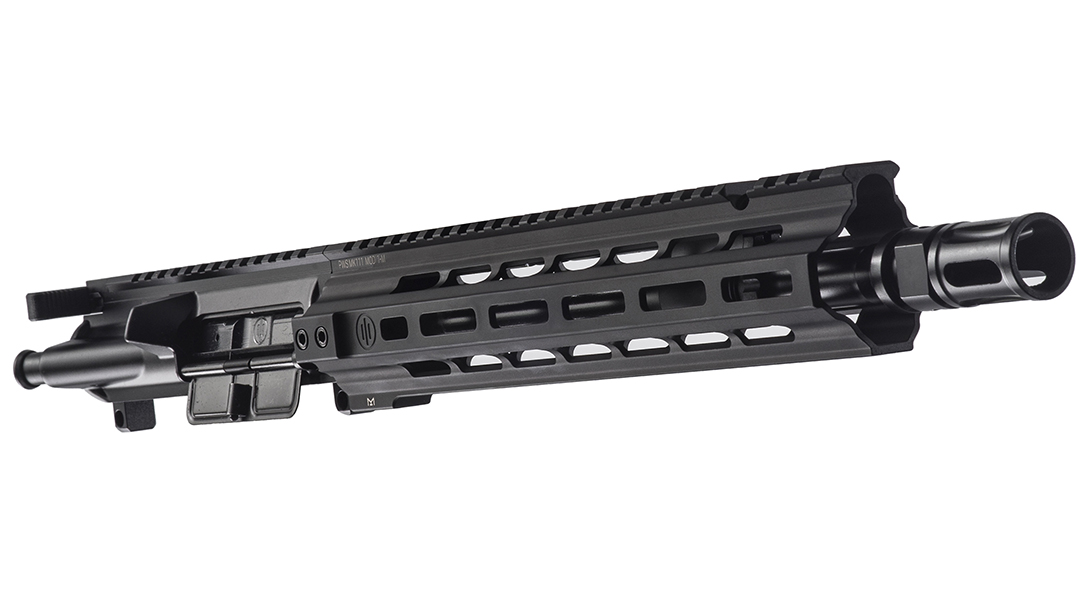 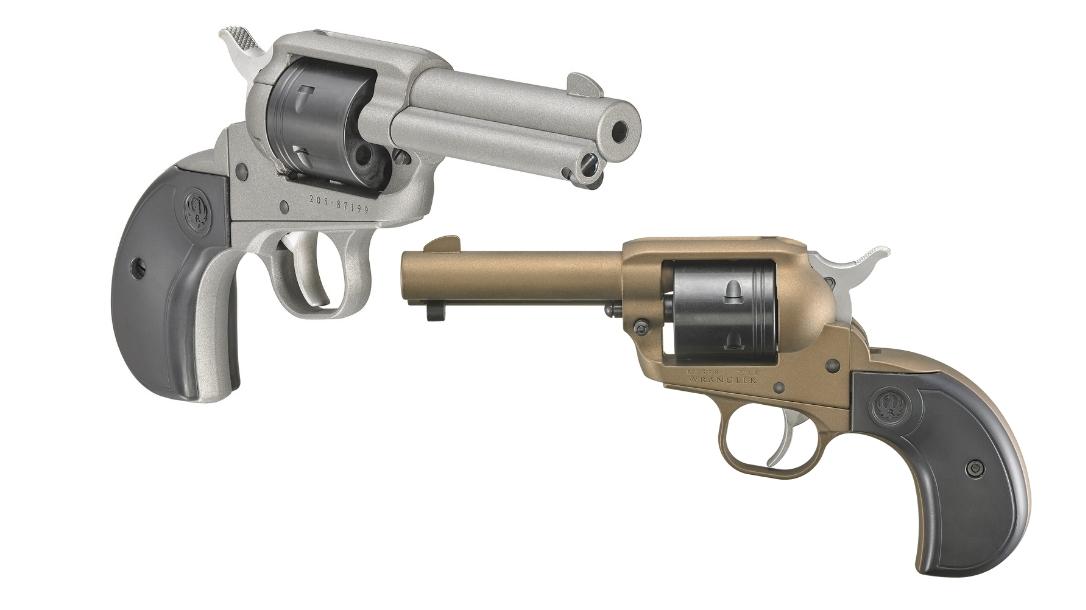 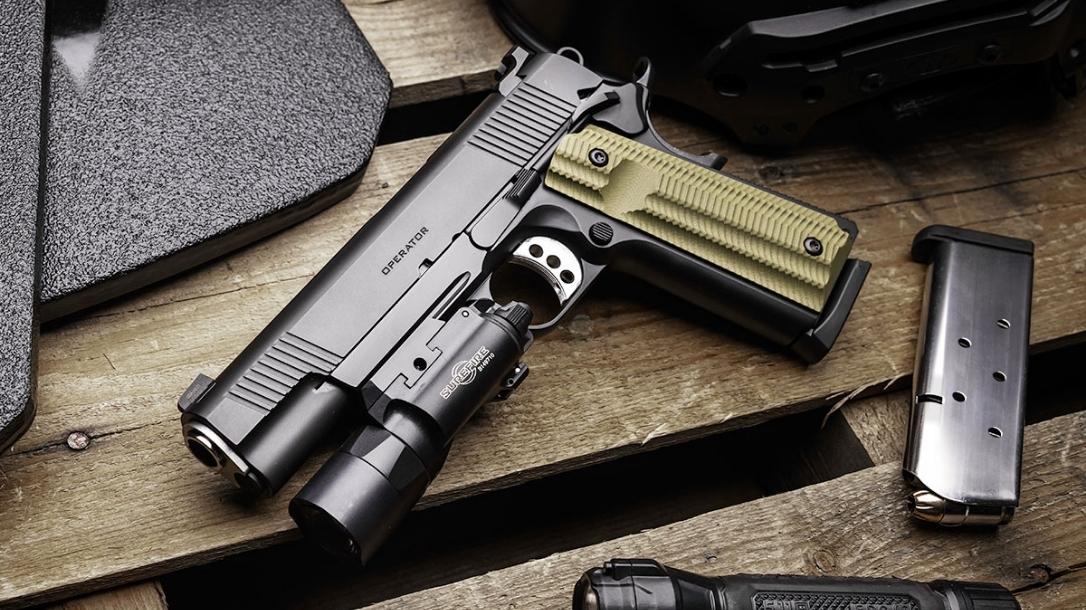 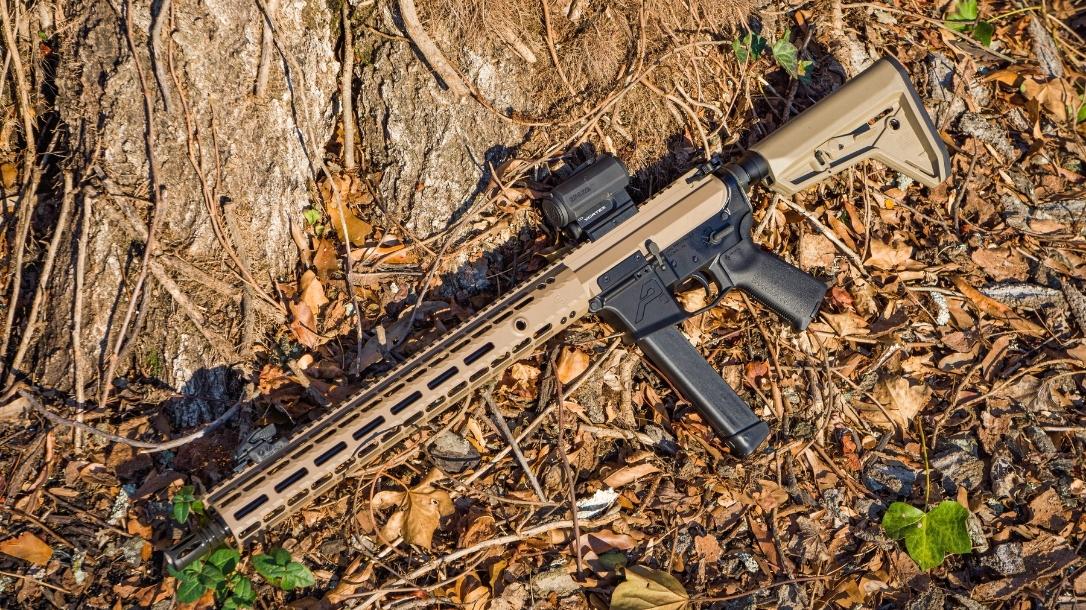