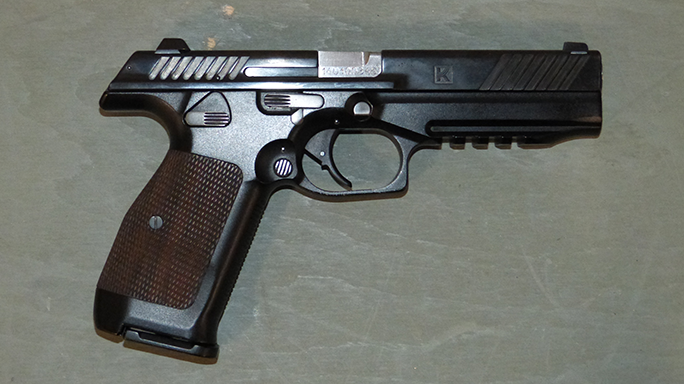 "Development for the PL-14 commenced in 2014, with the intent to create a pistol suitable for use as a defensive sidearm for military and law enforcement personnel, with future modifications aimed at SWAT-type units that use pistols as primary weapons and for competition."
Comment(s)

The PL-14 pistol was first announced to the general public during the 2015 Russian Arms Expo, which was held in the Moscow suburb of Kubinka. Produced in the experimental works of the famous Kalashnikov Concern in Izhevsk, this handgun is intended to replace various service-type pistols now in use by the Russian army and law enforcement. It will also serve as a basic platform for sport shooting modifications for IPSC, IDPA and other similar competitions.

The pistol was created because existing service pistols are either obsolete (like the venerable 9×18 Makarov PM, which is over 60 years old) or not entirely satisfactory according to current needs of shooting professionals (such as the more modern 9×19 Yarygin PYa or the 9×21 Vektor SR-1M).

The PL-14 pistol is a service-type handgun designed by Dmitry Lebedev. Development for this handgun commenced in 2014, with the intent to create a pistol suitable for use as a defensive sidearm for military and law enforcement personnel, with future modifications aimed at SWAT-type units that use pistols as primary weapons and for competition.

The other key figure who influenced the design of the PL-14 was Andrew Kirisenko, who holds several Russia championship titles in IPSC and who also trains with several elite Russian law enforcement units. The key concepts behind the PL-14 are human engineering (the gun has excellent ergonomics, optimal balance and points naturally in the hand); extreme reliability and durability (its service life is expected to be no less than 10,000 rounds of very hot 7N21 AP, and probably double or triple that with commercial 9mm ammo); completely ambidextrous use and maximum safety of handling.

It must be noted that the PL-14 is still in development. It will certainly change a lot before being ready for production and official trials, which are tentatively scheduled for 2016. So, the following description applies only to the prototype.

The PL-14 pistol is a short-recoil-operated, locked-breech handgun that uses a modified Browning Hi-Power-type locking mechanism; the barrel engages the slide with a single lug that enters the extraction window at the top of the slide. The frame is made from aluminum alloy. Its grip shape has been carefully calculated and angled for greater “pointability” and minimal overall thickness. Production models will possibly feature reinforced polymer frames with removable grip panels of different sizes. The gun’s controls (manual safeties, slide release levers and magazine release buttons) are ambidextrous.

It features a double-action-only (DAO) trigger and concealed hammer. The manual safety, when engaged, disconnects the trigger from the hammer, making the gun totally safe. A loaded-chamber indicator is provided in the form of a pin that protrudes from the back of the slide when the gun is loaded and ready to fire. The gun uses proprietary double-stack steel magazines with a 15-round capacity. Standard fixed sights are dovetailed to the slide and a Picatinny accessory rail is provided below the barrel.

The prototype PL-14 pistol I examined was extremely well made and felt very thin. Despite its service-type length, it could make an excellent concealed-carry weapon, especially as its controls are flat and unobtrusive. The grip is ergonomically shaped, and the gun’s bore axis is extremely low. The gun points well and is quite accurate.

Provided that the design and manufacturing teams of Kalashnikov Concern will fulfill their promises and eventually make this gun a full production item, the PL-14 would make an excellent all-around pistol suitable for service, defensive or competitive use. 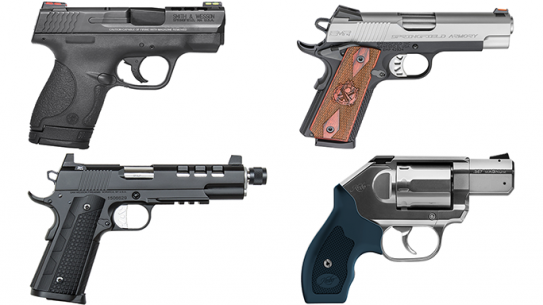 26 New Mid- To Full-Sized Handguns On the Market

Check out these new mid- to full-sized handguns hitting the firearms market in 2016...