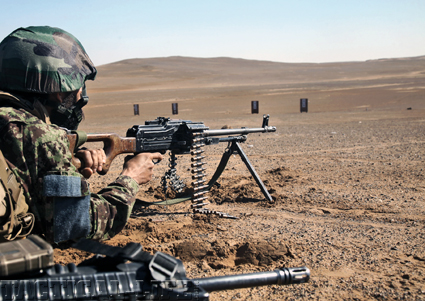 The Soviet Union adopted the PK/PKM model machine gun in 1961, with a lighter, improved version, the PKM, deployed in 1969. The Soviet’s exposure to the German MG34/42 machine gun definitely impacted the thought process in developing its new generation of belt-fed weapons after World War II. In basic terms, the PK/PKM is a general purpose machine gun that provides belt-fed, switch-barrel automatic firepower to infantry units combined with portability that’s not too far removed from a typical combat rifle. The PK/PKM is crew-served and can be mounted to a tripod or fired supported by its integral bipod. Just as Kalashnikov’s AK-47/AKM replaced the Soviet Union’s infantry rifles after WW II, so did his RPK and PK/PKM machine guns, which also made use of his piston driven rotating bolt design. Along the same lines as Kalashnikov’s AK series, the PK/PKM is manufactured from stamped sheet steel and assembled by riveting and spot welds along with top cover assembly. The PK/PKM’s ejector is similar to the AK’s and affixed inside the receiver.

PK/PKM System
The PK/PKM is an air-cooled, gas-operated piston, open-bolt functioning automatic weapon chambered in the hard-hitting 7.62x54R—think rimmed .30-06 for reference. The PKM weighs just over 17 pounds empty and gains about another 12 pounds when combined with a box magazine containing 250 linked rounds. The PK/PKM family tree contains multiple versions, such as a tank coaxial gun (PKT) with electric trigger and armored personnel carrier version (PKB). Cyclic rate of the PK/PKM is generally set at approximately 650 rounds per minute, with the three-position gas regulator able to be adjusted depending on how dirty the weapon becomes. The PK/PKM’s chrome-plated gas piston is located under the barrel; the PK/PKM’s bore and chamber are also chrome-plated—a typical feature of most Soviet/Russian designed weapons. The PK/PKM is fed via metal non-disintegrating closed pocket belts. Standard belt lengths are 100, 200, and 250 rounds. 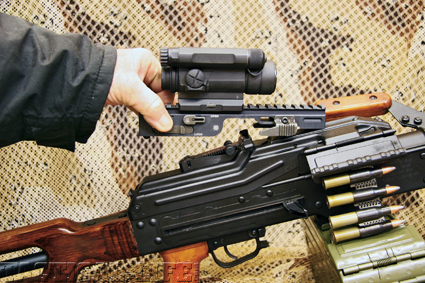 Keeping pace with trends of weapons today, the PKM has seen the development of aftermarket accessories to enable the mounting of sights and increase its effectiveness.

The Soviets/Russians are very familiar with what it takes to ensure a rimmed cartridge like the 7.62x54R feeds efficiently and reliably in a machine gun. The PK/PKM’s predecessors, the SG 43 Goriunov and Maxim machine guns, used the same belt design and similar feed methods. The functioning and mechanics of the feeding mechanism are interesting to witness in action. The 7.62x54R feeds from the closed pocket cartridge belt in a two-stage process with a fresh round plucked from the belt via a double hooked cartridge gripper. Once a fresh cartridge is extracted from the belt, it is lowered from the feed tray down to the chamber area ahead of the bolt, and then fed into the chamber with the belt advanced in preparation for the next round to feed. The belt enters the PK/PKM from the right side of the weapon with empties ejecting out of the left. 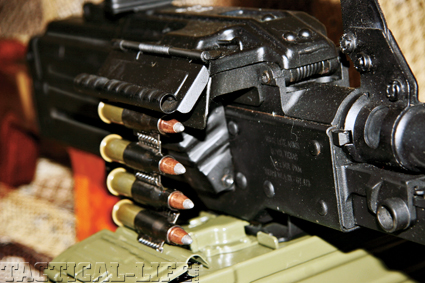 Definite care should be give when positioning the support arm while firing the PKM, as it feeds right-to-left—contrary to Western models. 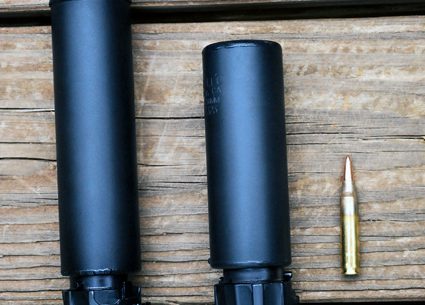 DoD photo. The Soviet Union adopted the PK/PKM model machine gun in 1961, with…