by Fred Demara
in Guns, Shotguns
0

1
SHARES
133
VIEWS
Share on FacebookShare on Twitter
Compact overall length and balance of this design will find favor among LE operators working in close quarters.

The shotgun has long been an effective tool for both the hunter and the man at arms. So effective was it in the trenches of WWI that the Germans wanted it outlawed for the effective counterpoint it gave to their superiority in automatic weapons.

Almost all military and police shotguns have been adaptations of sporting arms, the most robust and reliable being chosen to receive the appurtenances of a weapon, such as bayonets and hand guards, and more recently pistol-grip stocks and mounting adapters for accurate sights and lights—in addition to specialized muzzle devices for a horizontal shot pattern, to provide standoff for breaching rounds, or compensators to facilitate rapid fire. There have been very few designs introduced that were purpose-built as tactical weapons. Such recent developments include rotary-magazine or full-automatic models, but for all their firepower these are cumbersome to the average overloaded G.I., and even more so for police work.

The 12-gauge cartridge, however, re­­mains an effective and adaptable round for both military and police applications. Because of its usefulness, this round always has and probably always will serve in loadings of ball, shot, breaching, less-lethal bean-bag or baton, gas, pepper, Taser, signal and other specialty projectiles. It has been only the platforms that shoot this capable round that have been found wanting. This is not to disparage rugged and serviceable designs by Remington, Ithaca and others that ably serve in uniform, but two characteristics that do not work in their favor are their dimension and magazine capacity. 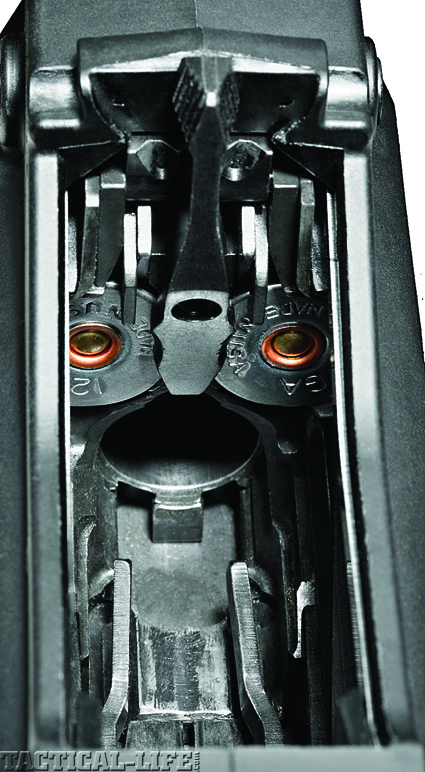