0
SHARES
21
VIEWS
Share on FacebookShare on Twitter
Even when equipped with a suppressor, the Kel-Tec RFB still has a length advantage over traditional carbines. Main Photo Steve Woods, Inset Oleg Volk

In today’s patrol car, the M4-type AR carbine is king. Its popularity has grown as a response to incidents in the past few decades and the potential for those to come, as well as a new generation of veterans becoming LEOs. Sure, there are patrol officers lugging around a bolt gun, or even the odd M14, perhaps on “loan” from Uncle Sam, but invariably the M4, from a surprisingly large number of different makers, will be the one at hand when responding to an active-shooter or hostage situation. 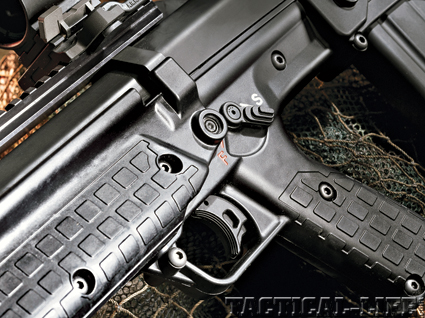 An operator can switch the ambi RFB to the other shoulder to handle corners with ease.

The average LE sniper shot is commonly accepted at about 50 yards, with 5 yards being the closest. No doubt a few shots approach “long distance,” and an even smaller number (near zero) of shots skirt into truly extraordinarily long distance. This can also reasonably be translated to patrol carbine use, indicating mostly close shots. Distances for shots fired during entry are better measured in feet. 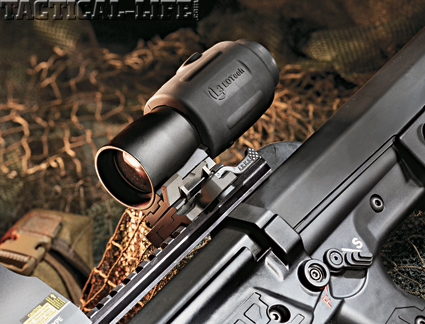 A 9.75-inch strip of Picatinny rail rides on the top cover for mounting optics.

Despite the problems it has incurred in the sandbox (where the .308 and other larger calibers are seeing new life), in the past, the 5.56mm round has proven effective in civilian and LE use against aggressors due to a number of factors including the infrequency of ballistic protection on offenders and the LE ability to use high-performance ammunition. But a long-distance, wind-bucking, barrier-penetrating shot may be in the deck, waiting to pop its head up and stick its tongue out at a 5.56mm pill that may just bounce off the barrier. 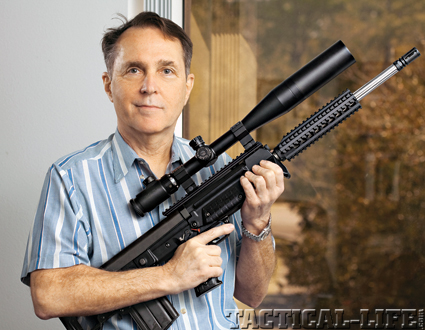 Kel-Tec president George Kellgren with a longer barreled version of the RFB. With the correct optics mounted, the RFB offers enough accuracy for long-range shooting as well. Oleg Volk Photo