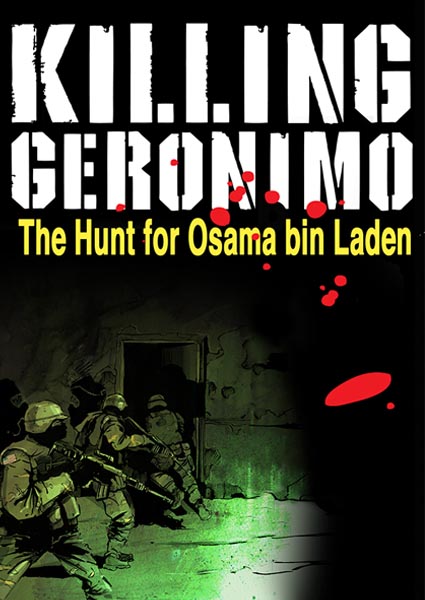 The high-stakes global pursuit and dramatic end of Osama bin Laden at the hands of America’s expertly trained Navy SEALS continues to be one of the most talked-about subjects of the year. KILLING GERONIMO: THE HUNT FOR OSAMA BIN LADEN (Gallery Books; on-sale December 4; Hardcover; $15.00) is a retelling, in graphic novel form, of America’s global search for the most notorious fugitive in modern times.

Beginning with the tragedy of September 11, 2001, to the final events in Pakistan, KILLING GERONIMO recreates the major events in the historically accurate timeline of the hunt for Al Qaeda leader Osama bin Laden:

· The initial order by President George W. Bush to find him wherever he might be hiding

· The U.S.’s construction of a facsimile of bin Laden’s compound

· The tense, high-stakes meeting between President Obama and the rest of his high command

· The final firefight between bin Laden and the U.S. Navy SEALs.

KILLING GERONIMO takes its title from the code name given Osama bin Laden during Operation Neptune Spear, the successful Navy SEALs mission which ended his reign on May 2, 2011.

Darren Davis (writer) founded Bluewater Productions in 2007. He has created a line of superhero children’s book, and has written two YA graphic novels.

Jerome Maida (writer) is the writer of the comics column in the Philadelphia Daily News, the only weekly column dedicated to comics in the United States.

Stefano Cardoselli (illustrator) has been creating comics since 2000. Besides Bluewater Productions, he has worked with 2000AD, Antarctic Press, Dark Slinger Comics, and more. In 2001, he founded Azurek Studios, which specializes in comics, toys, and animation.

U.S. military deaths in Afghanistan at 2,031