0
SHARES
253
VIEWS
Share on FacebookShare on Twitter
The Kimber Model 8400, now available in .300 Win Mag, employs an action that is a modernized and improved version of the tried-and-true Mauser 98/Winchester Model 70 type. It is shown here fitted out with a McCann MIRS rail mounting system that offers a lot of “real estate” for mounting optics and accessories.

While many today think of Kimber as a pistol company that got into the rifle business, nearly the opposite is true. Kimber was originally founded in 1979 to make fine sporting rifles, but things didn’t work out and they went out of business in the late 80’s.  That didn’t last long. Kimber came back in 1992 under new ownership, picking up where they left off with rifles and soon adding 1911 pistols. Today, Kimber is the world’s largest producer of John Browning’s best effort.  Equally important, their rifles are back and better than ever. Kimber actually entered the centerfire rifle market about eight years ago with their petite Model 84M, a downsized classic action sized just for the .308 family of cartridges. Things worked out, and soon the full-size Model 8400 was launched. With it came tactical rifles. The Model 8400 Tactical rifle line should please just about any precision tactical marksman, as it has all the features these demanding professionals require and then some. One of the latest versions is the Model 8400 Police Tactical in .300 Win Mag.

The Model 8400 Police Tactical has a Mauser-type claw extractor that accomplishes two purposes. First is controlled round feeding, which means that the large extractor grabs the cartridge as it rises from the magazine to be fed, controlling its path from magazine to chamber. This makes for very positive and reliable feeding. Second, the Mauser-type extractor permits “snap-over feeding,” that is a cartridge can be dropped into the receiver and the bolt closed on it, allowing the magazine to remain fully loaded.

Another feature sure to warm the hearts of precision tactical shooters is the ejection system. The Kimber Model 8400 uses a blade type ejector at the left rear of the receiver, just behind the magazine. This allows the shooter to maintain full control over the spent casing from the time he or she lifts the bolt to extract the spent casing until the casing is actually ejected. If the shooter wishes to throw the spent casing well clear of the rifle, all that is necessary is to pull the bolt briskly to the rear and the spent case will fly out of the receiver slightly forward and to the right. For those situations where the shooter must maintain accountability for his or her brass or for those missions where leaving brass behind is not desirable, slowly drawing the bolt to the rear leaves the spent case lying in the receiver where the shooter can grasp it and dispose of it as desired. Of course, the controlled ejection allows for anything between these two extremes. In other words, the Kimber’s action gives the shooter total control over throughout the cycle of operation. 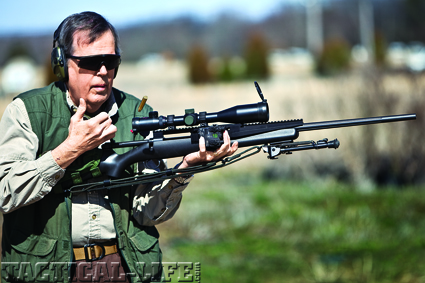 The Kimber Model 8400 proved to deliver superb accuracy right from the box. No Model 8400 Tactical leaves the factory unless it shoots 0.5 MOA from a machine rest, and the rifle shot well under 1 MOA with all ammo tested.

The bolt handle is an oversized tactical unit that provides the shooter positive control either bare handed or when wearing gloves. The safety is mounted on the bolt hood and has three positions: forward (fire), middle (safe but with the bolt free to work back and forth) and rear (safe with bolt locked in place). The bolt is removed by pressing a button at the left rear of the receiver and simply withdrawing it. The magazine floorplate is released for a magazine “dump” by a button at the forward portion of the triggerguard, conveniently located for easy access, but enough out of the way that it is almost impossible to accidentally release.

The Kimber action is machined using computer numerically controlled (CNC) equipment that facilitates close tolerances and minimizes final machining to maximize fit and finish, while minimizing production costs. Despite the use of CNC production machinery, the Model 8400’s final fit and finish is accomplished by hand lapping the locking lugs for smoothness and precise fit and honing the receiver raceways where the bolt travels for smooth operation. The chamber is cut to match tolerances and the 24-inch bull barrel has four lands and grooves with a right hand twist rate of 1-in-12 inches.

The action is glass bedded into the McMillan A5 fiberglass stock. The trigger of our test rifle broke at precisely 3 pounds with no perceptible movement, creep or overtravel. 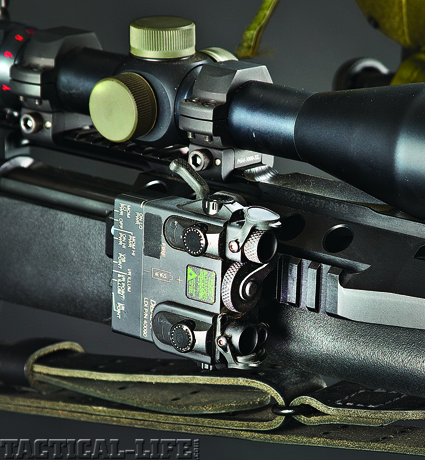 Precision tactical marksmen actually are intelligence assets and in many units are controlled by the S2 intelligence officer. During our law enforcement marksman training, we spent a large portion of our course training as intelligence gathering observers in tactical scenarios as well as intensive shooting. In addition to a rangefinder to determine distance from the shooter’s position, good quality binoculars are also necessary and Leupold’s (leupold.com; 800-538-7653) RXB-IV 9x28mm binoculars combine rangefinder and binoculars in a single package. As a rangefinder the RXB-IV has a range of 1500 yards/meters while displaying the true ballistic range. Shooting up or downhill requires range adjustment. The ballistic range for holds is actually less than the “line of sight” range as measured. Up until now, the angle had to be measured and a simple mathematical formula used to obtain the true ballistic range, actually the cosine of a right triangle. Leupold’s RXB-IV binocular/rangefinder displays the true ballistic range automatically and functions regardless of rain, fog or foliage. The RXB-IV also displays the temperature in either Celsius or Fahrenheit. Eye relief is adjustable, and the RXB-IV is available in black, natural (tan) or camouflage.

Shooting Impressions
Every Kimber Model 8400 Police Tactical is accuracy tested before leaving the factory and those that do not achieve sub minute of angle accuracy (MOA) aren’t shipped. For those who may not be familiar with the MOA concept, it can be thought of as 1-inch at 100 yards, 2 inches at 200 yards, 3 inches at 300 yards and so on. To ensure that every Model 8400 is held to the same standard, Kimber test fires every one using both Black Hills and Federal Match ammunition.
Of course, the proof of any precision tactical rifle is in the shooting, so we took our test Kimber to the range with great expectations and it didn’t disappoint us – it came through our accuracy testing with flying colors. We achieved our best groups with Black Hills 190-grain match ammunition, but the rifle performed well with all ammunition. The latest Kimber is a rifle that does everything a precision tactical shooter could ask of it. It is truly a “rifleman’s rifle.” Find out more at kimberamerica.com or call 800-880-2418.