It wasn’t all that long ago that if you wanted a rifle specifically set up as a tactical/long-range rifle, you had to go to a custom builder. Then, not only did you pay for it with your first born, but you also had to wait about the same amount of time to get it. Things, as they say, have changed. Most companies that manufacture bolt-action rifles are now offering tactical versions, and the competition for this share of the market is fierce. Kimber offers six tactically styled bolt-action rifles, and from a price standpoint, their Model 8400 Tactical falls right in the middle of this range.

The Kimber Model 8400 Tactical, like all but one of the tactically styled Kimber bolt-action rifles, is built on their 8400 action. This is what’s known as a control-round-feed (CRF) action, where the full-length extractor grabs the rim of the cartridge as it begins to exit the magazine box. The validity of a CRF versus a push-feed (PF) style action has been and continues to be debated, and that’s an argument for a later time. However, the CRF-style action made most famous by the Mauser 98 is considered by many rifle aficionados to be the pinnacle of bolt-action design. 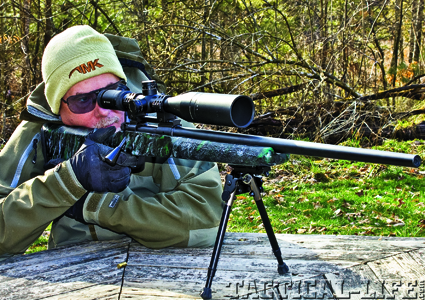 Whether you are looking for a long-range tactical or hunting rifle, the Kimber 8400 Tactical should satisfy with its smooth action and excellent trigger

On the left side of the action, you’ll find a small button. If you depress this button you can remove the bolt from the action for cleaning and maintenance. The 8400 action also utilizes a fixed ejector and has a hinged floorplate with a release button just inside the front of the triggerguard. There is an oversized bolt handle and a Mil-Spec Picatinny rail as well.

The barrel on the Model 8400 Tactical is a heavy 24-inch barrel that tapers from 1.15 inches just in front of the action to 0.75 inches at the muzzle. It has a deeply crowned muzzle and a 1-in-12-inch, right-hand twist with four grooves. Surprisingly, Kimber cuts the chamber by hand to the minimum SAAMI specifications. Additionally, the bolt lugs are hand-lapped and perfectly squared. To validate their choice of components and assembly methods, for a Model 8400 Tactical to leave the factory, it must shoot a three-shot group that measures less than half an inch! For a stock, Kimber chose the McMillan A5 Tactical stock. It comes with heavy texturing on the pistol grip and forend, three sling swivel studs and a thick Pachmayr Decelerator recoil pad. The stock is not painted but comes as delivered from McMillan with a light grey, black and envy green swirl of colors, which provide sort of a pseudo-camouflage. Kimber perfectly glass beds the action to the McMillan stock.

To properly test the accuracy potential of a rifle like this, a quality scope is a must. I have a Viper PST 4-16×50 FFP riflescope on extended loan from Vortex Optics that I use just for jobs like this. It was mounted to the one-piece base using a set of Weaver Tactical rings. I got behind the rifle and fired one shot at 100 yards to begin the zero process. I made a slight adjustment and fired another shot. This was followed by another minor adjustment, and then I fired a five-shot group using Black Hills’ 168-grain BTHP ammunition. That first five-shot group from the Kimber Model 8400 Tactical measured an almost perfect half-inch. As it turned out, that was the best group fired, but the average group size for all 15 five-shot groups was still just a shade over 1 inch. The rifle will shoot.

In addition to discovering that the Kimber Model 8400 Tactical is a tack driver, I learned some other things. One that really stood out was how slick the bolt cycled. I’m sure I have never cycled a CRF action that was this smooth. In fact, it was so smooth, the first few times I cycled the bolt I had to partially open it to see if it had actually chambered a cartridge. There was absolutely no binding at any point during the bolt’s travel. This action is as slick as baby oil on a linoleum floor. 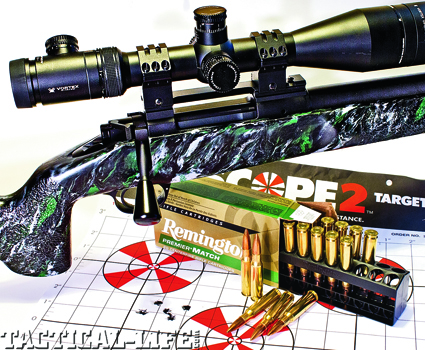 Of the 15 five-shot groups fired with the Kimber 8400 Tactical, this 1.58-inch group with Remington Match ammo was the largest.

I also liked the way the rifle recoiled. With the forearm positioned on one bag and the flat portion of the buttstock positioned on another, the rifle moved straight back. To those new to precision shooting this may not seem like a big deal, but the way a rifle recoils influences accuracy. Few, including me, are good enough to actually see this advantage at 100 yards, but trust me, at 500 yards and beyond, a rifle that recoils inconsistently will cause you to shoot erratically.

During the evaluation of the Kimber Model 8400 Tactical, I fired 100 rounds. A good portion of those was fired from the prone position with the aid of a bipod. This is where the cutout along the belly of the buttstock was beneficial. It was a good receptacle for the placement of a small sandbag or your support hand; both of which are used to fine-tune your elevation alignment when shooting from supported field positions. The forearm on the McMillan stock was also comfortable and I liked the rough texture. When shooting from the unsupported seated or kneeling positions, it provided a comfortable hold for the support hand. The same goes for the hand-filling, rough-textured vertical pistol grip.

As nice as all of these things were, the most notable feature of the Kimber Model 8400 Tactical was the trigger. I am a stickler when it comes to triggers. After all, it is the ultimate interface between the gun and the shooter. I’m not such a trigger snob that I expect a quality trigger on a bargain-priced firearm, but if a rifle has a price tag anywhere near a grand, then it should have a good trigger.

According to my Timney trigger pull gauge, the trigger on the Kimber Model 8400 Tactical broke at 3.5 pounds. Most importantly, there was absolutely no take-up and minimal over-travel. Even more critical to accurate shooting, the trigger pull was unfailingly consistent. It felt exactly the same every time it was pulled. I also liked that the trigger face was smooth. This is unequivocally the best trigger I have pulled on an over-the-counter, stock factory rifle.

No firearm is perfect, and there are two things I would like to point out about the Kimber 8400 Tactical. I’ve never been one of those who swore by the CRF action, even when it comes to a dangerous game rifle. No action is jam proof. One of my favorite features of a push-feed action—especially when it comes to tactical or dangerous game situations—is that you can simply drop a cartridge in the ejection port and close the bolt. While the 8400 has a CRF action, it is actually designed so that one can still drop a cartridge directly into the chamber. However, Kimber noted that it will require more force than normal to close the bolt. Granted, I may be nitpicking, and it’s probably a non-issue for most riflemen. 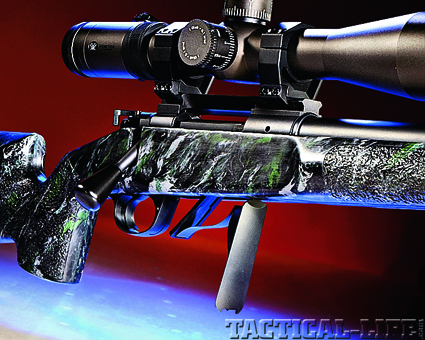 My second complaint deals with the sling swivel studs. I would have preferred a flush-mount system like those available on the Advanced Tactical models. These could have been mounted on the left side of the stock, making the rifle more comfy to carry when slung and eliminating the need for the rear swivel stud, an obstruction when shooting from sandbangs.

The bottom line is that the Kimber 8400 Tactical is a very nice rifle that sells for about half of what you can expect to pay for a similarly configured custom rifle. If you’re looking for a heavy-barreled tactical bolt gun, expect zero buyer’s remorse after you take one of these home. This is a rifle you can brag about, and when your buddy works the action, pulls the trigger and looks at the target, he’ll be green with envy. For more information, visit kimberamerica.com or call 888-243-4522.