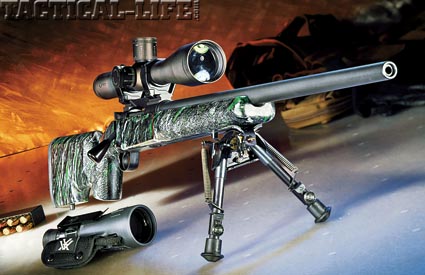 Law enforcement agencies and officers have diverse needs when it comes to firearms. This is particularly true with rifles. If you lump all long guns into the rifle category, you have to include everything from the short, compact entry weapons to the long and heavy counter-sniper rifles. All these rifles are commonly referred to as tactical rifles, but their proper application and configuration can vary tremendously. Why does this matter?

When agencies—large and small—are selecting weapon systems, a lot of things can happen. It’s rare that the cop who will actually be using the weapon system will be the one who selects it. It’s just as rare that the officer will have any input in the selection process. In many cases, cost plays into the equation. Additionally, sometimes the administrative officers in charge of procurement are so far removed from the field that the tactical rifle they select may not meet the needs of the officer who ends up on the trigger.

When selecting a tactical bolt rifle for law enforcement use, application should be considered first. For example, an agency looking for an urban patrol rifle—a rifle that will be carried in a patrol car—might be best equipped with a rifle like Kimber’s Model 84M LPT. This is a lightweight, heavy-barreled rifle that can be had in .223 Remington. It should be just the ticket for a beat officer who might need to engage a shooter at a short to moderate range. 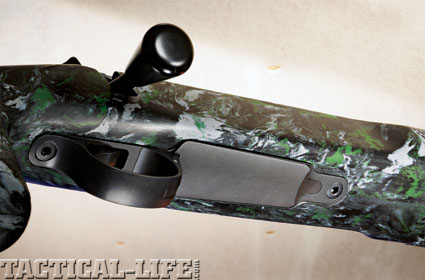 All metal surfaces on the Model 8400 Tactical are matte black. The floorplate release is just forward of the trigger, inside the guard.

On the other hand, a patrol rifle used in a rural environment, where shots can be longer or where large animals like rogue black bears might be encountered, should probably be chambered for a more powerful cartridge. Remember the lions, tigers and bears that got loose near Zanesville, Ohio, in October 2011? I’d much rather have been armed with a .308 or even a .300 Win. Mag. as opposed to a .223 in that situation.

But the cartridge a tactical rifle is chambered for is not the only consideration. Patrol rifles should not be tremendously heavy. The basic premise of a patrol rifle is to provide street officers a lightweight, portable firearm that is more accurate and more powerful than their duty handgun. A patrol rifle might also be described as a compact hunting rifle. For what it’s worth, an iconic hunting rifle, the Winchester Model 94 in .30-30 Win., was quite popular for some time as a patrol rifle.

Aside from the entry-type weapons, which are usually compact, select-fire carbines, the other common police tactical rifle is the LE marksman or counter-sniper rifle. This is where the Kimber Model 8400 fits in the lineup. A counter-sniper rifle like this is designed to be used from a static position in a situation where extreme accuracy is needed to solve the problem. In addition to the ability to make a precise shot, the shot might need to be made through some sort of barrier. This is generally best accomplished with a .30-caliber bullet.

The point of all this is to illustrate that all tactical rifles are not equal. They should be selected based on how they might actually be applied in a real-world situation. Kimber understands these differences, which is why they offer six differently configured, tactical bolt guns. Cartridge choices in the line include the .223 Remington, .308 Winchester and the .300 Winchester Magnum. The six tactical rifles available from Kimber range in weight from 8 pounds to 10.5 pounds and the overall length of these rifles varies by more than 5 inches. Prices vary, too, from $1,495 to $2,651. Kimber’s Model 8400 Tactical falls right in the middle of this price range. The 8400 Tactical unquestionably falls into the sniper/counter-sniper classification as does the Kimber Model 8400 Police Tactical, which has the same retail price. So, which one should you choose and what’s the difference?

The cutout in the bottom of the 8400’s stock allows for the effective placement of a rear bag or the shooter’s support hand.

Kimber equips the Model 8400 Tactical with a scope rail that has a built-in 20-MOA offset, ideal for most long-range platforms.

Gun Details
The Model 8400 Police Tactical is configured more like a sporting rifle, with a heavy barrel and an oversized bolt handle. It should be sufficient for dealing with most law enforcement precision shooting situations. The Model 8400 Tactical has more of a target rifle configuration, and these features can be of assistance when shooting from the prone position or when having to lie behind the rifle for an extended period.

For example, the Model 8400 Tactical is a little heavier. This means it will sit on a sandbag more solidly with less shooter stabilization required. The Model 8400 Tactical also uses a McMillan A5 Tactical stock, which has a near-vertical pistol grip. This is more comfortable from the prone position. There are some other differences in the stock, too. The forend is wide and flat, which allows it to interface very well with a sandbag. And the bottom of the buttstock is notched so that the shooter can make minute elevation corrections directly with his support hand or by squeezing a small support bag that has been wedged into this notch.

Regardless of the tactical rifle decision you make, you’ll hope that the rifle comes ready out of the box for the field. From a practical and liability standpoint, you don’t want your department armorer having to tinker with the rifle. When an agency spends two grand for a tactical rifle, it should be ready to go with nothing more than a good optic, some good ammo and possibly a bipod.

The Model 8400 Tactical comes out of the box with two forward-mounted sling swivel studs on the McMillan stock for bipod and sling attachment. The McMillan stock is also glass-bedded to the barreled action to prevent action shift during recoil or due to temperature variations. A one-piece rail with a 20-MOA offset comes pre-attached to the action. It’s doubtful many agencies will need to shoot at a distance where a 20-MOA offset is needed, but there’s no harm in having that capability.

The 24-inch stainless steel barrel has a 1-in-12-inch right-hand twist rate. The barrel has a bull contour and Kimber gives it a nice matte blue finish. The chamber is match grade. In addition, the Model 8400 Tactical utilizes the Mauser 98-style CRF (controlled round feed) action. This is important to some, and few tactical rifles—custom or commercial—are built on CRF actions.

Then there is the trigger, which is the most important area of shooter interface with any firearm. I’m a trigger snob, especially when it comes to firearms that cost a grand or more. There’s no reason a firearm in that price range should not have a good trigger. And, making a good trigger is not a secret—any manufacturer can do it, but the result is that the cost is passed on to the consumer.

Kimber has an excellent trigger with the 8400 Tactical. I can say without hesitation that this is one of the best triggers I have pulled on any firearm. There was no take-up. There was no creep. Over-travel was near nonexistent, and the pull was consistent from shot to shot to shot. Out of the box, the trigger broke at 3.5 pounds according to my Timney Triggers pull gauge. If that’s too heavy, the trigger on the Model 8400 Tactical is adjustable. 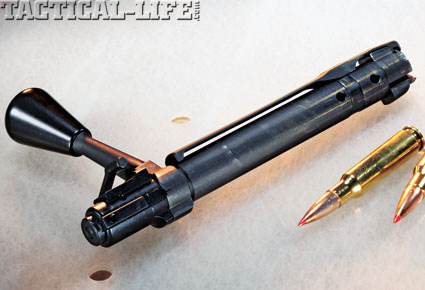 Range Time
The ability to place shots with precision is something that cannot be compromised with a law enforcement tactical rifle of this nature. It can mean the difference between life and death of not just one but multiple innocent folks. The Kimber Model 8400 Tactical rifle must print a three-shot group of less than 0.5 inches before it can leave the factory. This means that when you pull a Model 8400 Tactical from the box, it should have already proven its precision.

I’m not the best shot in the world. On a good day, with a good rifle and good ammo, I can generally put three shots into one hole at 100 yards. Any time that I can put five shots inside an inch at 100 yards from a bench rest, I figure the rifle is way more capable than I am. In all, I fired 15 five-shot groups with the Kimber Model 8400 Tactical from a sandbag rest at 100 yards using a Vortex Viper riflescope set on 16X. Five of those five-shot groups—including the very first group fired—measured less than an inch.

There’s no doubt that the excellent trigger played a big part. But I also believe that hand-lapped lugs, a squared bolt face and the chamber, which is cut by hand to the SAAMI (Sporting Arms and Ammunition Institute) minimum dimensions, contributed, too. With a bit of experimentation to find a load this rifle really likes, and with a good marksman behind the trigger, I can’t see how this rifle would fail to provide the level of precision required by any law enforcement agency. The Kimber Model 8400 Tactical is a fine rifle and is available at a price about half what you would pay for a similarly performing, full-custom tactical rifle.

Final Thoughts
If you or your agency is looking for a precision bolt rifle to be used mostly from a static position and at any range you could reasonably expect to be encountered in a law enforcement confrontation, the Kimber Model 8400 Tactical is poised to deliver. If needs are more in line with a patrol-type rifle, well, Kimber has you covered there, too. Kimber also offers two Advanced 8400 Tactical rifles (one in black and one in camo), and both have adjustable stocks. The camo version is also available in .300 Winchester Magnum, just in case you think you might run into one of those escaped Bengal tigers. 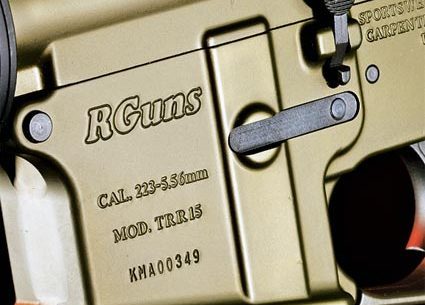