Life is all about balance, and nowhere is that more evident than in hunting. From the earliest times, people have struggled to find a balance between having “enough gun” and overdoing it. Things like a firearm’s weight and recoil are two of the biggest factors that get discussed around campfires. Another interesting angle that I enjoy engaging in is simply the challenge of the hunt. With advances in guns and optics, just about anyone can whack an animal with little effort. Many genuine hunters have turned to large-caliber handguns as a way of bringing back the thrill of the hunt. 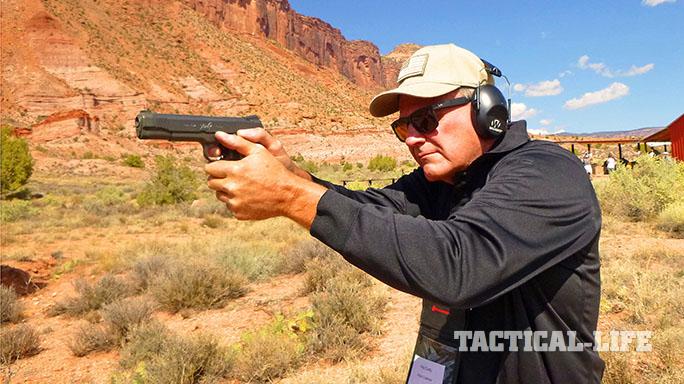 The challenge has been finding a handgun with sufficient power to take deer-sized game without breaking your wrists with hand-cannon recoil. While there are a wide variety of cartridges to try out in this arena, the 10mm seems to offer the perfect balance of power and recoil. With all of this in mind, the good folks at Kimber developed what might just be the ultimate 10mm hunting pistol—the Super Jägare.

The Super Jägare is a dedicated hunting pistol chambered for the powerful 10mm round. It’s built on a 1911 frame and comes stock with a Leupold DeltaPoint Pro reflex sight. And Kimber committed completely to the optic style and did not include any other traditional sights on the gun. While some in the gun world prefer a more “utilitarian” gun, Kimber has gone full hunting with the Super Jägare.

The gun has a 6-inch barrel which gives us an extra inch in which to gain a breath more muzzle velocity. The barrel and slide are also ported to help reduce muzzle rise from 10mm rounds, which isn’t as much of an issue as it may seem. The gun is pure Kimber, and it’s easy to shoot. Coming in at a comfortable 42 ounces unloaded, it absorbs recoil very well. Containing this powerful round is a stainless steel slide and frame. This not only makes it beefy and strong, but it also helps it withstand harsh weather.

Built for the Field

This gun wasn’t built to simply occupy space in a safe. Kimber wants it to stand up to conditions hunters will face in the field. That’s why the slide has a diamond-like carbon (DLC) finish, which helps resist corrosion. The frame has Kimber’s popular KimPro finish, with a gray color here that looks great and offers a nice contrast. The grip panels are made of Micarta, another tough material.

The Super Jägare is also designed so it’s easy to use and run during a hunt, especially in terms of its controls. It has a good-sized ambidextrous thumb safety as well as a checkered magazine release. The slide’s fish-scale-like serrations provide plenty of surface area for easy racking and press-checks, and the beavertail grip safety is smooth yet easy to activate. So, as you can see, from barrel to backstrap, the gun is well designed and built.

Shooting the Super Jägare was quite enjoyable. I have always been a fan of the 10mm round and was excited to see Kimber building a gun for it. And it goes without saying that the fit and finish on my test pistol were great. The tolerances on the gun were tight as well, but not absurd in that regard. The gun is designed to be carried by people trekking across fields, mountains and swamps. It is not a delicate beauty queen that will only run in perfect conditions. In fact, range day proved to be a good test of that.

I shot the gun here in central Arizona in very dusty, windy conditions. In just a short time, the gun was covered in the kind of fine dust that tries to permeate everything it touches. While I did lube the gun, I did not take any special steps to keep it running. This same relentless dust and dirt has claimed the life of more than one gun on the range in the past, and I was pleased to see that the Super Jägare was unaffected.

As the shooting tests began, the Super Jägare demonstrated all the traditional Kimber trademarks. It is a 1911, so it immediately had an advantage in the trigger area. The test gun’s trigger pull was smooth and weighed just over 4 pounds. A point to remember is that this is a hunting gun and not a competition pistol, so for those of you who may already be scheming to lighten the trigger, I believe it is great just where it is.

The barrel porting is a nice feature because it allowed me to get back on target very quickly. It’s much more than just an aesthetic feature, as it effectively reduces muzzle rise. Winslow Potter, Kimber’s director of product marketing, described the Super Jägare as “a well-balanced 10mm powerhouse that points quickly on target and has a lightning-fast recovery time due to the extremely effective barrel porting.

The stepped porting of the slide not only allows the gases to escape from the barrel, but efficiently lightens the slide to reduce felt recoil and promote faster lock times for the longer 6-inch slide.”

I really liked the addition of the Leupold DeltaPoint Pro because it gave me a great field of view and was exceptionally clear. One very nice feature of the optic is its “auto-on” capability. The sight features Leupold’s motion-sensor technology that activates the dot reticle as soon as the unit moves. This is nice to have when your target appears out of nowhere and you only have a short window of time to make the shot.

I did experience some dust issues on the glass, but that’s pretty easy to deal with. Kimber includes a rubberized cover for the optic that peels off quickly and easily, and I would absolutely use it in the field.

Performance-wise, the gun was a shooter. I was easily able to punch quarter-sized groups at 25 yards. On a deer or other similarly sized game, this kind of accuracy would be more than sufficient to make the hunt successful. For this test, my targets were 12-inch steel plates set from 25 to 100 yards. Is the 10mm capable to hitting at longer distances? You bet, but I have found most deer and other similarly sized game is taken inside that distance.

The gun produced nothing but continuous, small, gray impact marks on the steel as the rounds hit exceptionally close to each other. I liked the fact that muzzle rise was minimal, as I am a firm believer in being ready to deliver follow-up shots. While the gun ran everything well, it seemed to really like the Hornady Custom 180-grain XTPs. These are good general-purpose rounds that I would use regularly in the Super Jägare. For those who might see a dual use for this gun, it also ran the Hornady 175-grain Critical Defense rounds well, too.

After some consideration, I think this gun would also be a pretty solid weapon for self-defense. One thing I have heard more and more from hunters is a desire not only to have a successful hunt, but a safe one as well. This is especially true for those who hunt in areas along the Southern border.

The 10mm round is no joke and would serve you well against four-legged threats as well as those of the two-legged variety. Remember, the 10mm was originally developed for gunfighting and personal protection. The FBI even used the 10mm for some time following the infamous Miami shootout in 1986. As for game application, I would happily hunt whitetails with this great pistol. Being a hog-hunting addict, I would also bring this out to Texas and run it against the biggest and baddest of the bunch.

In the end, I really like the Kimber Super Jägare. The pistol ran well and felt great in my hands. It provides me with excellent ballistics in a smaller package that still isn’t punishing. It was accurate, fast and reliable, which are my primary criteria for a hunting weapon. Now, granted, a price tag of over $2,600 might make some people flinch, but it is worth every penny. Kimber has really hit a home run with the Super Jägare. It is a unique 10mm 1911 designed by serious hunters for serious hunters.

For even more info, visit kimberamerica.com.