by Matt Berger
in Uncategorized
0 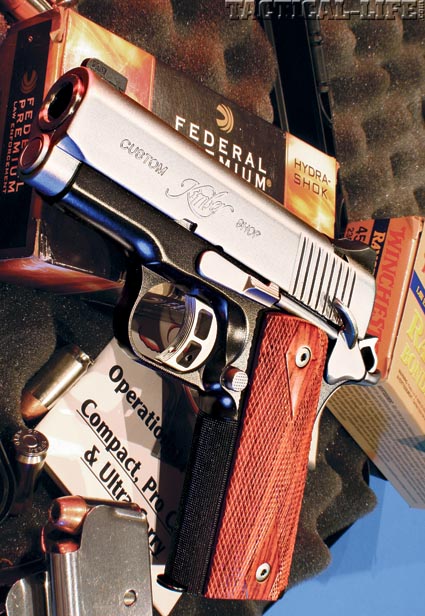 Kimber’s Ultra+ CDP II performs just as well as it looks. With a Carry Melt treatment that won’t snag on clothes and a 7+1 capacity of .45 ACP, this is a great backup handgun.

I still remember the first time I saw a Kimber CDP (Custom Defense Package). One of our officers had arrived at work, showing off his newest acquisition, a Pro CDP from the Kimber Custom Shop. The CDP had a few striking features that set it apart from Kimber’s other models. Most obvious among them was the handsome contrast between the matte stainless slide and the black, lightweight aluminum alloy frame—both components plus their respective small parts were given a Carry Melt on all edges, which are normally sharp or at right angles. Seeing these features in my colleague’s CDP made an impression on me. At that point, it was the only production gun I knew of that had a true “melt” treatment, changing the pistol’s look and feel.

Of course, the CDP has been available in its familiar three sizes: Custom, Pro, and Ultra. But toward the end of 2010, a fourth model was added to the CDP family, the Ultra+ CDP II. The Ultra+ is essentially an Ultra gun with a full-length grip frame. The longer grip frame adds another round to the gun’s capacity, gives the handler a more compact profile than the Pro, and works well for those with large hands. The “II” designation means that the Schwartz-style firing-pin block safety is utilized in the design. Some argue that this safety system is superior to Colt’s Series 80 system because, rather than being connected to a series of parts driven by the trigger, it is disengaged by the grip safety, thereby not complicating the trigger pull.

The gun arrived in its Kimber case with one blue steel seven-round magazine and two stainless KimPro Tac-Mags with eight-round capacities. These magazines had polished tubes and metal followers, and could be used with long or short bumper pads (which were included with the pistol) fixed to the floorplates for a flush fit in the magazine well. Numbered holes on the sides allow for an at-a-glance round count. Note that the Tac-Mags are sold seperately. Kimber’s Custom Shop explained that building CDPs with these special features from the start ultimately reduces production costs and saves the customer a significant amount of money.

The frame is machined from a lightweight 7075-T7 forging and features a beveled magazine well and 30 line-per-inch checkering on the frontstrap and on the underside of the triggerguard. The frame’s matte black KimPro II finish is offset by stainless small parts: ambidextrous thumb safeties with extended serrated pads, a high-swept beavertail grip safety, a slide stop and magazine release with checkered pads, a slotted and serrated commander-style hammer, and a lightweight aluminum skeletonized long trigger with a serrated face that can be adjusted for overtravel. A polymer, flat-checkered mainspring housing enhances the grip.
The 3-inch carbon steel bull barrel is ramped and mated to a recess cut in the frame. It is button-broached with a left-hand twist of 1 in 16 inches and treated to an 11-degree crown. Kimber’s standard loaded-chamber indicator port, a notch at the barrel’s rear, makes the case rim of a chambered round visible to the shooter. For those who want a lightweight, compact pistol not only for carrying but also for shooting, the CDP’s supported barrel means there is no worry of an anodized ramp on the aluminum frame wearing down. Also worth noting are Kimber’s aluminum frames, which have been tested to over 20,000 rounds with no evidence of significant wear.

The slide is cut from a stainless forging and given a satin silver finish. Cocking serrations are machined only at the rear. The ejection port is lowered and flared with an extra bevel at the front to help it clear ejecting brass. Three-dot tritium sights of the fixed combat variety are fitted to dovetail cuts machined into the slide. These sights are low profile, with the rear sight having horizontal serrations on the back; a set screw eases windage adjustment. The proven internal-style extractor is used. “Custom Shop” roll marks flank the Kimber logo on the slide’s left flat. The legend “ULTRA+ CDP II” is engraved under the ejection port. Both the barrel and the slide are fitted to one another.

A compact dual captive spring guide rod assembly allows the stubby springs to generate 18 pounds of force. A full-length guide rod is received by a reverse plug at the muzzle. The included takedown tool (a paper clip also works) must be used to keep the guide rod assembly compressed once the slide is locked back; otherwise, field stripping is, as with full-sized models, without bushing. Since recoil springs in short-barreled guns see much harsher duty than their full-sized counterparts, it’s recommended that this assembly be replaced every 800 rounds.

By all appearances, the Ultra+ CDP II was a very nice pistol, but it was time to see if it was a shooter. Benching the pistol at 15 yards due to its 3-inch barrel felt reasonable for testing accuracy capabilities. I had picked out a selection of ammo from Asym, CorBon, Federal, Speer and Winchester, and most were 230 grains in weight. I also took a chance on the Asym 185-grain Match JHP to see if the CDP would function with the lighter bullet. 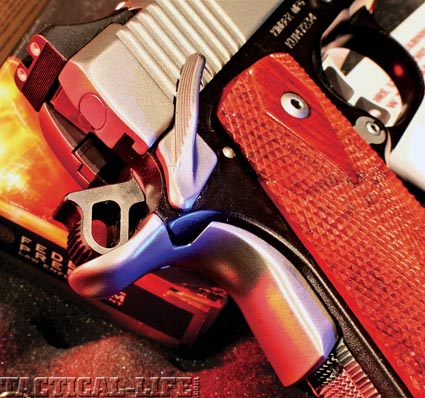 The pistol features an ambidextrous safety with extended, serrated pads and a grip safety just below the swept beavertail.

The largest five-round group of the day was only 1.75 inches using the Federal Premium LE 230-grain Hydra-Shok. This was also some of the healthiest recoiling-ammo tested that afternoon. A bit tighter were the CorBon 230-grain FMJ and the Speer 230-grain GDHP, both grouping at 1.56 inches. The Winchester 230-grain Ranger BJHP tightened the pattern to 1.19 inches, and the tightest cluster of the day saw five rounds funneling into just 0.94 inches with the Asym 185-grain Match JHP. Not only did the gun cycle with the Asym, but, ironically, the lighter load I had taken a chance on was also most accurate. None of the above ammo is of value in a defensive pistol if it can’t cycle and feed reliably. Fortunately the Ultra+ CDP II functioned flawlessly with all the ammunition.

The pistol couldn’t have ridden more comfortably in-hand, a function of both the legendary 1911 ergonomics and the Custom Shop’s Carry Melt treatment. The relieved triggerguard and sculpted beavertail grip safety allowed for a high, comfortable grasp on the CDP. The fine checkering on the frontstrap and on the mainspring housing gave a very positive gripping surface while not being uncomfortably course or sharp. Aside from this, the CDP just plain feels light for a 1911. I’m one who definitely appreciates a good trigger, and the Ultra+ CDP II had that and more. Breaking at a crisp 4.38 pounds, the trigger had less than a 0.063 inches of take-up before giving resistance, with roughly just as much travel from resistance to the break. And while most all 1911s I’ve handled had at least some vertical play of the trigger shoe in its track, this pistol had none.

There was very little, if anything, to dislike about the Ultra+ CDP II. In fact, I’m hard-pressed to make any criticisms. I’m certain Kimber’s customers will like the Ultra+ CDP II. It’s a nice pistol when it comes to looks, form and function, and it’s a shooter. Perfectly designed for fighting and concealed carry, the CDP goes one step further with its clean, handsome look. For more information, visit kimberamerica.com or call 888-243-4522.