by Guns & Weapons
in Guns, Handguns
0 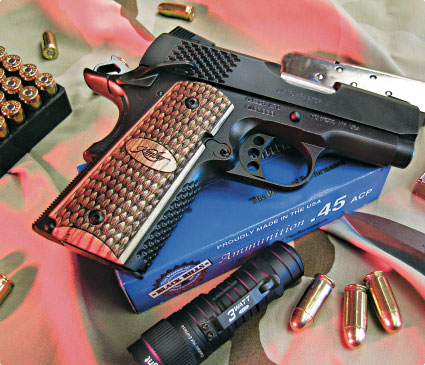 IN THE REAL WORLD function always carries more weight than appearance, especially in any combat application. Thankfully, this doesn’t always mean that we must be relegated to one or the other. Every once in a while, a gun maker creates an exceptional model, one with both utility and great looks. Such is the case with Kimber’s Raptor II series pistols. Between the scale texture treatment on the frontstrap and slide, and those cut into the absolutely beautiful wood grips, this pistol boasts reptilian aesthetics that are strikingly attractive, and truly unique in a crowded 1911 market. Frankly, this is why the Raptor initially caught my eye, prompting me to request a pistol for test and evaluation. 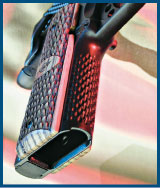 Produced in Kimber’s Custom Shop, the Ultra Raptor II is succinctly a carbon steel slide/aluminum alloy frame chopped 1911 with a matte black oxide finish. Its primary attributes, which set it apart from all others, are the aforementioned “scale” cuts in the frontstrap, cocking serrations, and on the flat top of the slide. The Raptor scales aren’t only appealing to the eye, but very functional gripping surfaces, much more rugged for hard use than fine checkering. In keeping with the Raptor theme, the stunning Zebra wood grips are cut with deep relief in a similar snakeskin pattern, the Kimber logo framed in the center. The textured panels are bordered and secured with hex head screws.