by Eric Poole
in Uncategorized
0

Many elements of warfare that were once proven by previous generations are quickly antiquated on today’s dynamic combat arenas. Having adapted to our capabilities, terrorists (so willing to die for jihad) exploit the shortcomings of American snipers equipped with bolt-action sniper rifles. Performing more missions with a larger troop element, snipers are now expected to roger-up in multi-threat engagements. Enter the M110. 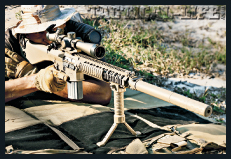 AR inventor Eugene Stoner would be proud of Reed
Knight’s M110 SASS after passing his design and
concepts before his death in 1997. The versatility of
the M110 is underscored by the sniper student with
a military-issued GripPod.

Attention to these matters initiated a rapid development schedule from the US Army’s PEO (Program Executive Office). The solicitation included a list of requirements based around an accurized semi-automatic .308 caliber sniper rifle. On September 28, 2005, the US Army awarded KAC (Knight’s Armament Company) a contract to develop the XM110 SASS (Semi-Automatic Sniper System). By April 2007, this sniper rifle underwent trial-by-fire overseas. Commanders assigned to Task Force Fury in Afghanistan returned with positive accounts from snipers using the XM110 alongside the M24 and constructive criticisms calling for certain modifications to the SASS. KAC was listening.

Gun Details
Initial requirements of the XM110 said that the rifle must weigh less than 15 pounds, feature an integral silencer, include an adjustable stock, ambidextrous controls, and include a bipod. By the time the “X”-prefix was dropped, the M110 had a number of subtle changes.

Based on the US Navy’s combat-proven SR-25 and the newer Mk-11 Mod 0 used by Marines, the M110 carries many refinements over its brethren including improved reliability and accuracy. Considering the vocal dissention from Eugene Stoner’s AR, why would the US Army stick with the AR platform? The decision was aimed at maximizing parts commonality with standard issue M16/M4s, training, and interoperability between soldiers regardless of MOS (Military Occupational Specialty).