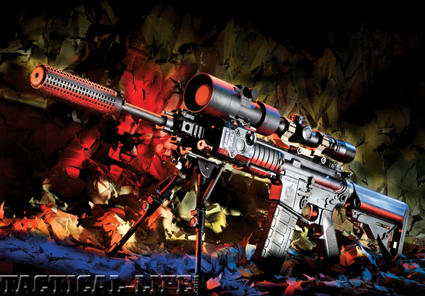 Complete with an UNS “Knight Vision” system in front of a NightForce day optic, this Knight’s SR15 IWS is also outfitted with an IPIM PEQ16 laser-illuminator from Insight and a Knight’s M4QD suppressor.

Let’s say you invented a gun. Not just any gun, but a landmark design that became the longest-serving rifle in U.S. military history. It’s an amazing gun you dreamed up. But now, some 50 years later, you’re given a chance to go back and redesign your much-heralded yet also much-maligned weapon. What would you do differently?

That’s the opportunity Eugene Stoner was given by Reed Knight Junior. Take all the lessons learned over the past decades, add anything new that might have emerged in the meantime and make a new gun. Stoner had unlimited resources behind him— Knight’s Armament Company is unrivalled as a state-of-the-art firearms manufacturing factory. He could have done anything —literally— yet he chose to merely fine-tune a few details on the AR he developed at the original ArmaLite many years ago. 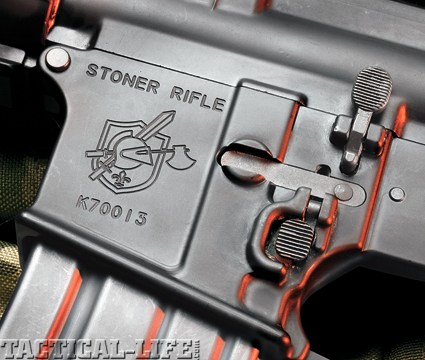 A mag release (lower button) is found on the left side of the SR15, a plus for southpaws.

Stoner was no dummy. He knew about gas-piston operating systems that had been developed as an “improvement” to his direct gas impingement system. Stoner was personal friends with Mikhail Kalashnikov, whose piston-driven model of 1947 is perhaps the most reliable such design ever made. Stoner had his chance to “fix” his AR with a purpose-built piston system that could “solve” all the problems of his original design. 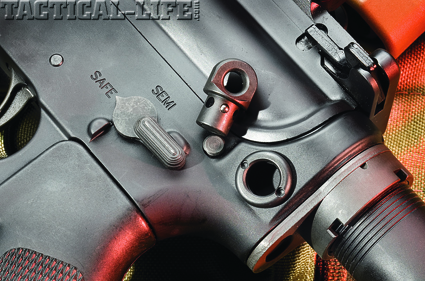 Removable sling studs are positioned on the URX forend and by the receiver extension.

But he did no such thing. I find it very telling that, mechanically, Stoner only saw a need to upgrade the bolt and modify the extractor. He added ambidexterity to the rifle’s controls and solved the poor positioning of its sling attachments. Of course he modernized the gun with the latest URX forend that his longtime friend Reed Knight designed, along with a number of other small refinements, but the revealing point is that Stoner did not totally redesign the operating system. Stoner’s final rendition of the AR is here now. It’s called the SR15 Integral Weapon System (IWS) from Knight’s Armament Company (KAC) and it deserves a close look. After all, it’s not often a legendary firearms designer is given a second chance. 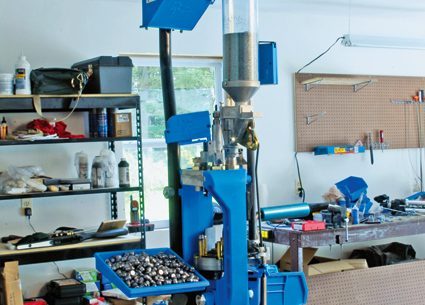 Complete with an UNS “Knight Vision” system in front of a NightForce day optic,…