WASHINGTON– Kosovo Force will transition from about 14,000 to 10,000 NATO forces by Jan. 31, due to improvements in security, said the commander of Multinational Task Force – East.

Brig. Gen. Al Dohrmann told media in Kosovo last week that improvements in security have prompted the Kosovo Force to move its posture to a “deterrent presence.”

“KFOR will rely more heavily on reserve forces that are able to quickly and decisively respond whenever and wherever necessary in support of local structures as a third responder,” Dohrmann said.

Dohrmann, a member of the North Dakota National Guard, assumed command of MNTF-East Nov. 14. He commands about 2,200 soldiers, including the Greek troops of Task Force Hellas and Polish/Ukrainian troops of Task Force POL/UKR; along with North Dakota’s 141st Maneuver Enhancement Brigade. KFOR is commanded by German Lt. Gen. Markus Bentler and is currently in its 12th rotation of forces.

“You may notice fewer KFOR patrols, but that is directly related to the abilities of the Kosovo Police,” Dohrmann said. “Any adjustments made will not decrease KFOR’s operational capability.”

Dohrmann was asked whether the move to a deterrent presence would affect security in Kosovo. He responded by stating that while there still are challenges ahead in Kosovo, progress continues every day.

“It’s teamwork between EULEX [European Rule of Law in Kosovo] and the KP, with KFOR, as a third responder, that makes success possible.” Dohrmann said, “As we move forward to 2010, MNTF-E will continue to work with the institutions to maintain a safe and secure environment in Kosovo.”

Dohrmann spoke with media in Gjilan/Gnjilane and Ferizaj/Urosevac during informal press events, called “press coffees,” Dec. 29 and 30, 2009. He said it was a pleasure to sit down with the local media from both cities, two of the largest in the MNTF-East sector, to discuss important issues.

In his opening statement, Dohrmann said that conditions in Kosovo had improved greatly since 2005, when he was in Kosovo as member of KFOR. He pointed out that there had been no major security incidents in Kosovo in 2009 and that both NATO and the North Atlantic Council have noted the “positive evolution” of the security situation.

“Transparency, cooperation, communication and respect for one another are the keys to the success of our mission,” said Dohrmann. “It is evident that there has been a steady improvement in the security situation in Kosovo, due, in large part, to the increased capability of the institutions in Kosovo.”

Dohrmann said his forces in MNTF-E will continue to pay special attention to illegal trafficking of arms, ammunition and explosives per the mandates of United Nations Security Council Resolution 1244 and the Military Technical Agreement.

The media also asked about KFOR’s role in economic development and civil projects in Kosovo, and specifically, how that might change with fewer forces on the ground.

“As we move to deterrent presence, the way we do civil affairs projects is going to change,” Dohrmann said. “Our focus will be on connecting donor organizations with Kosovo communities. My expectation is to that we will work to put a system in place that will last long after KFOR.

“Kosovo is headed toward a brighter future and that is something we can all be extremely proud of.” 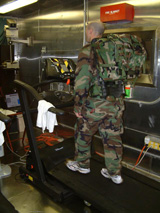