Krebs Custom is a well-established leader in the American AK world. Marc Krebs is an innovator known for pushing AK performance boundaries. With so many customers inquiring about Marc’s opinions of how best to customize their AKs being sent into Krebs Custom, he decided to offer a “production” Krebs AK. These rifles incorporate Marc Krebs’ years of experience combined with feedback from legions of customers. The goal was to minimize the wait time associated with custom projects by standardizing certain upgrade features.

Understandably, with the previous administration curtailing the import of Russian AKs, Krebs has had to become a little creative in obtaining AKs. While Krebs’ earlier AKs were based on Izhmash Saiga AK rifles, due to better availability, the company’s new KV-13 rifles are based on the Saiga’s Russian cousin, the Molot VEPR. Krebs offers both 5.45x39mm and 7.62x39mm versions of the KV-13, and I recently got my hands on both for testing.

While Izhmash Saigas are more widely known, VEPRs have their own impressive heritage and distinguishing characteristics. Molot has been building these guns to Soviet/Russian military specifications for over 50 years. Each VEPR built at the Molot factory is also a direct descendant of the RPK light machine gun. This means that VEPRs have thicker steel receivers and trunnions due to the abuse typically dished out to a light machine gun. The cold-hammer-forged barrels are also rated for over 50,000 rounds. Each barrel is heat-treated for eight hours, then annealed and chrome-lined in a vacuum for the highest possible quality.

In the U.S. market, VEPR rifles are highly sought after by those who want reliable working examples of Soviet/Russian weapons, and they only get better once Krebs Custom turns its attention to them.

There is a tremendous amount of fitting that goes into these Krebs AKs. They each receive an internal reliability checks, and the bolt carrier group and guide rails are honed. The action is then tuned for enhanced reliability. Any sharp exterior surfaces are dehorned, and the triggerguard is radiused. The rifles are then industrially tumbled and dehorned for fast, painless operation before being given a tough, matte black KrebsCoat finish. In short, even without firing a live round, a Krebs AK’s superiority over a standard AK can be detected in the smoothness of the action and trigger pull, the quality of the finish and how the weapon feels overall.

With each KV-13, Krebs mounts an M16A2-style rear sight at the rear of the dust cover. This sight has two apertures and is adjustable for windage. Krebs’ Mod 1 rifles (like the 5.45x39mm variant I tested) have front sights mounted on the handguard while Mod 2 versions (like the test 7.62x39mm) have their front sights mounted on their chrome-lined gas blocks. These sights provide a longer sight radius than a standard AK. Also, during testing, the rear sights did not lose their zeros after repeatedly removing and reinstalling the dust covers on both rifles. This is due to Krebs Custom reinforcing the cover with a plate and wedge-lock recoil system to reduce movement.

More upgrades include the Krebs Custom UFM KeyMod Rail System forends. These handguards are made of 6061-T6 aluminum and have KeyMod slots along the sides and bottom for accessories without adding too much bulk. The top rails on these handguards also make it easy to add sights and optics. Also, with the 7.62x39mm KV-13 Mod 2, you’ll notice a short rail built into the rear sight housing that is perfect for co-witnessing.

At the rear, the test KV-13s were fitted with adjustable Magpul CTR stocks, and the Mod 1’s can be folded to the left side of the receiver. The Mod 2 uses a one-piece VEPR-to-AR stock adapter with three quick-detach (QD) sling attachment points. Both rifles measure 36.5 inches long with their Magpul CTR stocks extended and 33.25 inches fully collapsed.

The KV-13 Mod 1 has a TAPCO SAW-style pistol grip, and the Mod 2 sports a Magpul MOE pistol grip. Both KV-13s also have Krebs Custom Mk VI safety levers installed. This allows shooters to manipulate the safety with their rigger fingers without changing their firing grip on the weapon. This detail immediately improves an AK’s ergonomics. Another Mk VI feature is the ability to function as manual bolt-hold-open via a notch in the lever.

Now for arguably the best part. Krebs tuned the KV-13 Mod 1’s G2 trigger into a two-stage work of art with minimal creep and a 5- to 6-pound pull. AK triggers aren’t known for being precise or comfortable, but somehow Krebs Custom pulled it off. Even more impressive is the ALG Defense AKT fire control group found in the KV-13 Mod 2, which Krebs expertly polishes and installs. The AKT is a single-stage trigger unit that every shooter will appreciate.

I tested both of the KV-13s at the Echo Valley Training Center (EVTC). As is my custom for forend-rail-equipped AKs, I used a 2.5x28mm Leupold FX-II Scout IER scope for the initial accuracy evaluation. This 2.5X optic only added 8.5 ounces to each rifle’s total weight while being more capable than the open sights or even a red dot. The scope gathers light in dim conditions with a reticle that is hard to beat for aiming, and the magnification will definitely help you out in the accuracy department.

I ran multiple 5.45x39mm and 7.62x39mm loads through the KV-13s, including those from Hornady, Wolf and Century Arms. The best group—measuring 2.25 inches wide at 100 yards—came with Hornady’s 60-grain V-MAX load in the KV-13 Mod 1. The other loads produced groups in the 3- to 3.5-inch range. And, as you’d expect, the KV-13s ran flawlessly while sending hundreds of rounds downrange.

After obtaining five-shot groups, I mounted a Trijicon MRO sight on the Mod 2 and a Sig Sauer Mini Red Dot on the Mod 1 for a more typical red-dot approach. Mounted on the UFM forend, the Sig sight was co-witnessed with the iron sights. I placed the Trijicon MRO on the Mod 2’s rear sight rail, and the iron sights showed up in the lower third of the red dot reticle. Either way, both of these sights made it easy to engage multiple targets in rapid sequence while at same time providing adequate accuracy out to a couple hundred yards on man-sized targets. Thankfully, the dot reticles never obscured the targets.

In between the magnified-optic and red-dot stages of the evaluation, I explored the iron sights on both rifles. The extended sight radius between the front and rear sights proved advantageous compared to typical AK iron sights over some tactical drills. One drill began by engaging targets at 35 and 95 yards with the KV-13 Mod 1. I shot each target five times while standing, moved to another location and fired five more rounds while kneeling and finally moved again and transitioned to a prone position to fire five more shots. I asked a couple of training partners to handle the Krebs KV-13 Mod 1 in this setup, and they all came away impressed with the rifle’s combat accuracy, thanks in part to the upgraded iron sights. 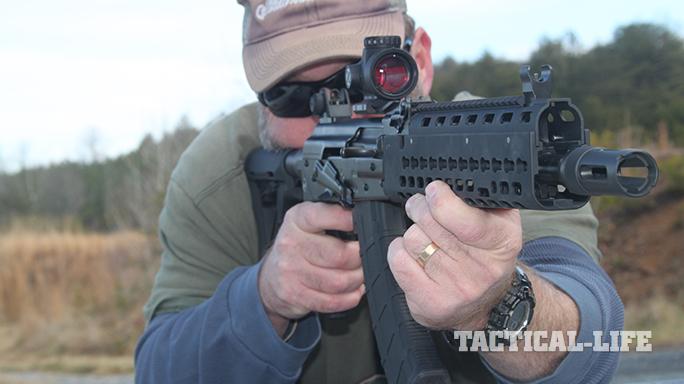 Anecdotally, the recoil impulses of both KV-13 rifles seemed smoother than other comparable AKs that I’ve tested to date. While neither chambering is considered a heavy-recoiling round by any stretch, the recoil patterns here seemed smoothed out—not as snappy as expected, even when firing multiple rounds in quick secession. This is a credit to Krebs Custom’s workmanship and tuning. The 8-pound KV-13s balanced very well, with the UFM forends helping to keep the weight centered or even slightly behind the action compared to most front-heavy AKs with quad-rail forends.

In the end, these Krebs Custom KV-13s should attract all serious rifle practitioners—not just AK connoisseurs. Both of these rifles are powerful, rugged, reliable, accurate and capable of handling multiple missions at once. Make sure you give them a closer look.