by Eric Poole
in Guns
0 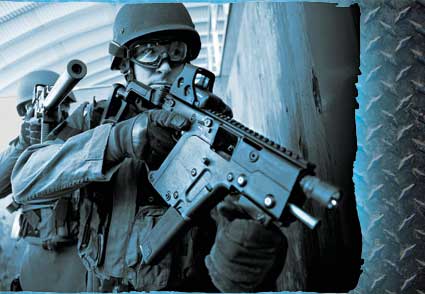 The tactical usefulness of the submachine gun has kept it in use for nearly a hundred years, but until now the tradeoffs for LE and military operators have included no optimal choices. The compact size and less recoil of pistol-caliber ammunition has allowed for great fire capacity in submachine guns, but minor calibers trade less recoil for less lethality. Major calibers trade more lethality for more recoil and more cumbersome weight.

What S.W.A.T. and SpecOps have needed but never had, was a submachine gun in a major caliber, which is at once compact and controllable. The operator’s search for a weapon that is light, compact, controllable and lethal may have ended with the innovative KRISS Super V system, developed by TDI. During a recent demonstration at Blackwater’s training facility, TDI reps described the KRISS Super V system and unveiled a commercial version, as well as a plastic-molded mock-up of a carbine due for a 2008 introduction. Named after the Indonesian fighting knife, the KRISS is aimed at replacing the aging MP5 as well as other submachine guns in the hands of military and LE operators, with a more lethal round in a more controllable envelope.

Size and weight have been incrementally reduced in modern subguns for ease of concealment and storage—but at the expense of controllable automatic fire in existing weapons, most of which are chambered in 9mm for its reduced felt recoil. But the special operations community and LE officers may no longer have to compromise in so many ways. An optimal solution may have come in form of the KRISS.

New Arm Design
The KRISS’s unique design directs kinetic energy downward by means of a bolt that rocks, lifts and cams before transferring the energy to a weighted slide. This totally new departure in arms design translates into a mechanically delayed blowback operation that starts the firing cycle from a closed bolt. The result is a reduction in felt recoil and a quantified reduction in the muzzle rise inherent with conventional weapons of this type. In conventional weapons, the rearward recoil energy moves towards the shooter’s shoulder and pivots the weapon, causing muzzle rise. TDI says: “Company tests indicate the mechanism reduces recoil by 40-60 percent and muzzle rise by about 95 percent over conventional gun operating systems.”

TDI has developed the KRISS with cooperation of the U.S. Army’s Picatinny research center in New Jersey. With this assistance, TDI has been able to reduce the parts count and keep repairs for armorers trouble-free and straight forward. Tom Maffin, retired Marine and senior armorer for TDI says, “We’ve made the parts large, which means they are easier to access, easier to clean and easier to maintain.” The KRISS weighs just over 5 pounds unloaded and the LE/Military version features a 5 1/2 inch barrel, with the weapon collapsing to an overall length of just 16 inches. “In this form, it can be easily carried or conveniently stored in tight spaces found in armored vehicles, patrol cars and helicopters,” says Maffin.“ In the .45, it’s got a punch that a lot of guys want.”

Mission Specific Weapon
Sales of the KRISS will be aimed at LE communities, protective security services such as the Secret Service, and unique military units that have mission-specific requirements, such as Delta operators, certain SEALs, etc. The compact size makes it ideal for use in transportation and urban warfare, as the KRISS could easily be stowed in the passenger compartment of a patrol car or slung across the chest of a protective service agent while sitting in a Suburban. This weapon will be ideal for departments who already use the Glock 21 as a primary sidearm, since it utilizes Glock 21 magazines.

Serial production is slated to start in early 2008 and the KRISS will be made in Virginia at the TDI facility known as “Viking Works.” Currently, TDI has eight engineers, machinists and gunsmiths working in a 4,000 square-foot facility. These numbers are expected to more than double as the company ramps up for production.

The civilian market will be able to enjoy the “V” technology in a .45-caliber carbine called the Vector CRB with a BATFE-mandated 16” barrel and semi-automatic only operation. Overall length of the CRB is 34.8” with the stock extended. A fake suppressor, something I do not particularly care for, shrouds the thin barrel and gives it the look of an M1919 machine gun of sorts. This aesthetic may change however, since this was a pre-production prototype. In the works are designs in other calibers including 5.56 NATO, 7.62 NATO and even a 12-guage shot­­­­­­­gun. TDI has also been awarded a contract with the U.S. Army to develop a light-weight, user-friendly .50-caliber machine gun, a contract worth in excess of one million dollars.

During our testing, the KRISS was impressive. Although spitting out nearly 1,200 rounds per minute, it was easy to keep a 20-round group centered on a static 12” x 12” steel plate from 15 yards. I did experience two jams during testing, one “stove-pipe” and one attempt at “double-feeding.” I think TDI needs to get away from using other magazines and develop a proprietary magazine with greater capacity.

Evaluation
Controls were easy to reach and the folding stock’s cheek weld was surprisingly comfortable. The operator’s face is placed comfortably in respect to viewing the Aimpoint and EOTech sights used in testing. I did like the integration of a flashlight cavity into the frame but didn’t like that it could only hold Surefire’s Executive Elite (E1) flashlight.

Operators will find the Picatinny rail useful, and they will like the compact size. But what may well make it a favorite over time are its superior ergonomics, its lethal caliber, and the fact this design, unlike any other, offers far superior controllability to any other weapon of this type. Especially in an urban environment, controllability is crucial to an operator: Only hits count… and rounds that are not hits may cause collateral damage.

Only time will tell if the introduction of this innovative design might have come late, as some military and LE agencies are beginning to move away from submachine guns. TDI still has to land a contract and develop a replacement parts inventory. Considering how difficult it is to get replacement parts for sub-guns like the HK, a well-maintained parts inventory could work in favor of the KRISS. Working against the KRISS is the price tag, expected to be around $1,695.

The total demise of submachine guns has been predicted but creative manufacturers have kept on designing—and LE and military agencies have kept on procuring—this type of weapon. Many recent developments have centered on using rifle-caliber rounds in an SMG-sized envelope, but for LE operators in particular, the problem of over-penetration is a public-safety consideration. As the nearly universal subgun round has been the 9×19, perhaps this innovative, controllable new design in a .45 ACP round will prove to be the arm that the LE/SpecOps operators have been waiting for.