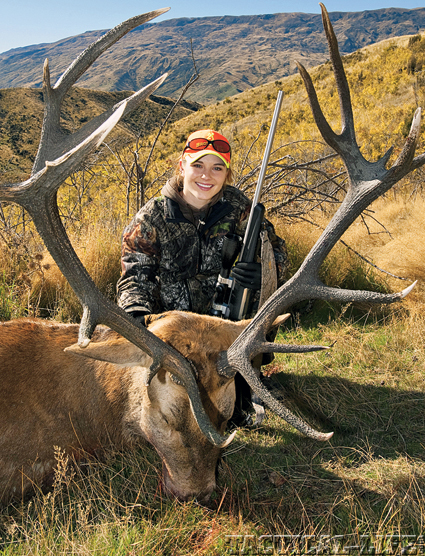 Like the title of her successful television show on the Outdoor Channel, Kristy Lee Cook has been Goin’ Country all her life. An Oregon native, Kristy Lee is a seasoned horse trainer and barrel-racing competitor who has moved to Nashville, Tennessee to pursue her country music career. She was an American Idol finalist in 2008, and most recently signed a new music contract with Broken Bow Records. These days, Kristy Lee Cook is spending a lot of time on the road and in the field as a hunting celebrity.

MY FIRST GUN: My first gun was a Browning .270 WSM White Gold Medallion.

FROM WHO? That’s an easy one. I received my first rifle from Browning when I started my hunting show! I had used my boyfriend’s gun, but Browning gave me my first rifle when I started Goin’ Country. It meant a lot to me because it was my first one. Not only was it my first, but my name was also engraved on the action.

STILL HAVE IT? I do still have it. I have actually never shot it. It is so pretty, with my name and everything, so I got another one from Browning and I use that one, the A-Bolt .270 WSM Stainless Stalker, which is my favorite rifle to use for everything.

MY MENTOR: To be honest, my shooting mentor was my ex. He got me into hunting. It was a trade because I was the horse girl and he was the hunter, so we decided that we would learn to do both. I shot my first buck with a .30-06 at 100 yards, right before dark, and dropped him in his tracks. Since then, I’ve been hooked.

LESSONS LEARNED: Hunting is an amazing experience! Hunters care more about wildlife than anyone else. Even though we hunt, we still love to see wildlife and experience the outdoors. I have learned a lot becoming the hunter that I am and I have been fortunate enough to teach others about it as well. Influencing a younger generation is a great honor for me.

MOST MEMORABLE HUNT: It was this past year, taking my boyfriend, Jesse, for his first blacktail bowhunt. I wanted to get him a buck, and a good one, like I have at my house. We both had our bows. Within a few hours, a doe came right below us. Then a monster buck came in from my side, walking up the hill. He stopped, facing towards me at about 30 yards, so I had no shot. Then he walked off. Right after that buck, another monster—and I’m not kidding when I say monster—came in. He was dark-horned, heavy and just past his ears and tall. When Jesse was trying to turn around to see the buck, his jacket was a bit noisy and scared the deer off. So, that was the end of hunting from that tree for the day. We walked back to the four-wheeler and saw another huge buck. It was like they kept getting bigger! I was going crazy. I wanted my .270—not a dang bow! The next day, maybe it was about 30 minutes before dark, we saw a buck chasing two does. Jesse got off my four-wheeler and snuck up in the grass a few yards further. The buck was focused on the doe and not paying any attention to us. I told Jesse to use his 40-yard pin. Jesse shot him. We followed the blood trail up the mountain and found his first blacktail lying in a dried-up creek bed.

FAVORITE SHOOTING: When I’m shooting at an elk. Nothing beats a long, hard hunt that you have worked your tail off for to aim your crosshairs at a nice bull!

HOW SHOOTING/HUNTING INFLUENCES ME IN EVERYDAY LIFE: Hunting teaches you to appreciate the outdoors—wildlife and the experience—to be able to appreciate our freedom with hunting and being a gun owner. It teaches you patience, to work hard, and in a way, how people lived in the old days.

MY GREATEST SHOT: Even though it wasn’t my furthest shot, it was a great shot! In Idaho, at Boulder Creek Outfitters, I shot across a canyon at 309 yards, off sticks, and dropped a bear. He rolled all the way to the bottom of the mountain. That was a fun hunt and a great bear.

IF I ONLY HAD ONE: I would stick with my Stainless Stalker .270 WSM. I have knocked down elk with this rifle with one shot, as well as bear and deer. It’s a great shooting rifle with my favorite Winchester XP3 bullets.

ADVICE I’D GIVE A YOUNGER ME: I would have to say, “Don’t be influenced by people who aren’t a good influence. What’s right is not always popular, and what is popular is not always right.”

IF I WEREN’T A MUSICIAN AND TV HOST I’D BE: That’s an easy one. I would be a professional barrel racer and horse trainer. Horses are one of my biggest passions.

GREATEST LIFE CHANGER: I would say American Idol changed my life the most. That was the real turnaround for my career. I had a record deal at 17 years of age, then one from Idol at 23. That is a huge platform for anyone, whether it be a TV personality, singer, actress, model, etc. It opened so many doors and was a great experience.

MY CHOICE OF FOXHOLE PARTNER: I would want to be with my Lord God. Do I really need to answer why? 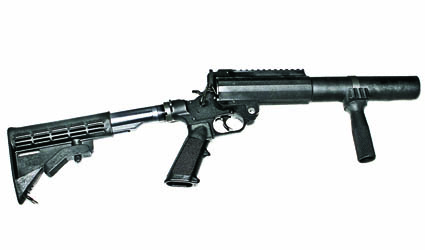 Browning/Patrick Cone Like the title of her successful television show on the Outdoor Channel,…