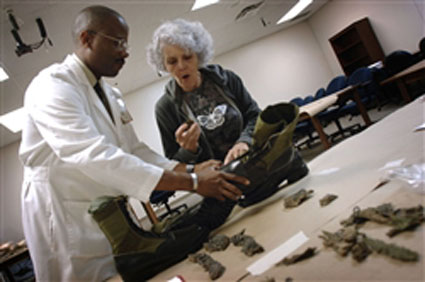 BROOKS CITY-BASE, Texas – As U.S. military recovery teams scour the jungles and mountains and woods and fields around the world looking for missing servicemembers from past wars, they hope to find enough remains to identify and return to their families for a proper burial.

A jawbone with some teeth intact or a piece of a thigh bone with its DNA still salvageable sometimes can be all that is needed to finally put to rest a servicemember who died fighting on foreign soil decades ago.

But sometimes there simply are no remains left, or very little, and the recovery teams return home with what looks to the untrained eye like only a box of scraps – varied buttons and corroded buckles, scorched cloth and shredded boot soles.

For those cases, the Hawaii-based Joint POW/MIA Accounting Command, the agency charged with recovering and identifying the remains of missing servicemembers, has one last-ditch try at answering the burning question of family members: “What happened to my loved one?”

“When the cases come here, we are the last hope. If we cannot come up with an answer, there may not be an answer for the families who are waiting,” said John A. Goines III, chief of the Life Sciences Equipment Laboratory here.

The JPAC has identified nearly 1,500 formerly missing servicemembers, mostly through a combination of DNA and dental identification. But 88,000 are still buried on foreign shores and at sea. And in some cases, like those that end up at Goines’ lab, it is likely no remains will ever be found.

The lab deals mostly with identifications from aircraft crash sites, because they are less likely to yield human remains. The heat, fed by jet fuel and loaded munitions, incinerates most human remains as temperatures reach several times those of a crematorium. But many pieces of military uniforms and equipment will withstand those temperatures.

Goines and his handful of equipment analysts are students of history and experts in aircraft ejection systems, parachutes, life support equipment and uniforms. Most are veterans. Remarkably, most times they are able to piece together with scientific accuracy the likely final moments of servicemembers based on the artifacts.

The lab supports the services’ accident boards investigating current aircraft crashes, and it also provides feedback to agencies working to develop new uniforms and life-support systems. But its primary purpose is to help the JPAC with its cases, Goines said. The JPAC sends the lab about a dozen cases every year that can take anywhere from a few weeks to six months to work through, Goines said.

The lab began supporting the JPAC mission part-time in 1988 and started supporting it full-time in 1994. Since 1994, it has analyzed 156 cases and accounted for 172 servicemembers. And while an identity cannot always be made from the artifacts, sometimes they still provide enough clues for the JPAC teams to return to the site, Goines said.

The 21,000-square-foot lab at the former Brooks Air Force Base in San Antonio is home to more than 50,000 uniforms and pieces of equipment from as far back as World War I. Parachutes dangle from racks, and rows of 250 ejection seats line the walls. The rebuilt cockpits of more than a dozen aircraft, mainly of the Vietnam War era, are parked on its floors, and workstations with microscopes are scattered among the artifacts.

Goines is a life-long collector of military uniforms and equipment. His first piece was an Air Force ball cap worn by airmen in his father’s unit, he said. Goines was then 3 years old. He continued collecting patches, uniforms and equipment into his college years. Goines watched television in his college dorm room while sitting in an F-4 Phantom II fighter jet ejection seat, which now resides at the lab, where he started working full-time after college.

Goines estimates he has about 20,000 items in his personal collection, which he brings in when needed to help on a case.

The analysts use the artifacts and equipment at the lab as comparisons to those shipped to the lab from a recovery site. Goines is constantly on the lookout for new relics to add to the collection.

“Pretty much every night I’m on eBay looking for anything we don’t have either in my personal collection or here in the lab to use as a reference item,” Goines said.

Nearly every piece delivered from the field yields a clue. Melted pistols reveal portions of serial numbers, traceable back to the servicemember. Boot soles can be matched to the servicemember by uniform records. They also can indicate whether the pilot was still in the cockpit pressing down on the plane rudder at impact. A seatbelt buckle melted together in the closed position is a telltale sign that the pilot likely died in his craft.

These clues are pieced together like a puzzle and matched with historical reports, witness accounts, military records and other evidence.

It can be tedious and painstaking work, said equipment analyst Jim Hodges. He has worked at the lab since 1988 after finishing a career as an egress systems expert in the Air Force.

“It’s very challenging. There’s a lot of frustration, too,” he said.

The analysts can spend hours hovering over a microscope analyzing fabric and piecing together uniforms. In Hodges’ last case, he pinned together 122 individual pieces of a flight suit.

Hodges said he views the lab’s mission as the fulfillment of the U.S. commitment to returning servicemembers home.

“When they say we never forget, that’s not lip service,” Hodges said. “There are a lot of people in this program still trying to account for those that are missing. And I’m proud to be a part of that.”

Sometimes, though, despite their best efforts, there is not enough found at the site to render a conclusive identity.

“That’s where the frustration is, when you just can’t figure it out,” Hodges said. “There’s not enough there. You need more.”

No speculation is allowed, Goines said. Everything must be proven. The integrity of the lab’s report is critical, because families rely on it, he said.

To make an identity, lab officials work to match the remnants brought from a site to those of the aircraft believed to have crashed. This can be done with serial numbers found on data plates at the site, or by identifying equipment distinctive to a specific model.

They also try to pinpoint the timeframe of the crash, based on the artifacts, to verify a match with the case under investigation. For example, there were many uniform variations during the Vietnam War. Those found at the site must match those worn by those believed to have crashed.

It also is critical to find artifacts from the exact number of people reportedly in the crash. For example, recovering the soles of two right-foot boots would indicate that two people were in the crash. If the sizes match those worn by the two reported in the crash, that’s more proof of identity.

Finally, the analysts try to determine, based on damage to the artifacts, if the crash was survivable.

“We have to follow all of those different leads to try to come up with the answer [to the question], ‘What really happened at the event?’” Goines said.

A handful of families travel to the lab every year to find out about the last moments of their loved ones. The lab has an open-door policy and will accommodate anyone wanting to understand its identification process.

“The families who lost somebody lost somebody very important. And the hurt — the ‘miss’ — never goes away,” said Robert S. Browning III, an equipment analyst at the lab. “There’s no such thing as closure, but you can answer their questions. You can tell them what happened. In some cases, you can put their minds at ease that there was no suffering.”

“You can, in fact, bring them to a better place,” Browning said. “I think that’s an important thing to do for people who have sacrificed a great deal.”