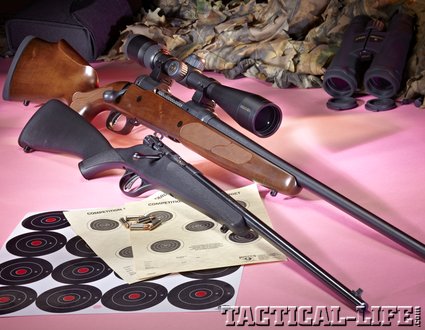 Savage proactively sought consumer feedback as they designed their innovative rifles for women and children. The Lady Hunter (top) and Rascal (bottom) are specifically built to ensure comfortable shooting for the whole family

My Mom was a hunter, way back when hunting was not the thing for women to do. She’d take my sister and me out squirrel hunting. However, Mom never went deer hunting—if she had, she’d have discovered that not a single manufacturer made a rifle to fit her.

Thirty years later my sister came to that conclusion. She’s hunted across North America and in Africa—all with rifles made for men. But now thanks to Savage, that’s something her and other ladies will never have to do again. 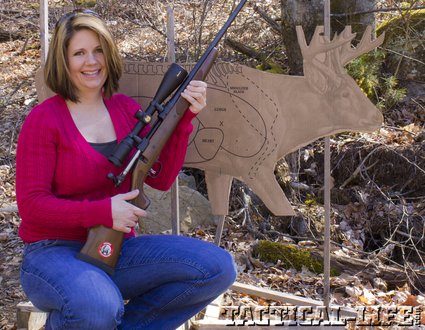 Savage’s intent with the Lady Hunter was to offer a rifle configured to fit women. This behind the scenes work by Savage is evident: This rifle is indeed built for a lady hunter.

Savage Arms is a 118-year old American icon that built their legacy on the famous lever-action rifle known as the 99. During World War I they made machine guns and shortly thereafter became the largest firearms manufacturer in the world.

Some historical trivia is in order. Before the United States officially joined World War I, American aviators signed on with the French Air Service forming the famous Lafayette Escadrille. They needed a squadron emblem and William Thaw, an American pilot and Yale graduate from Pennsylvania, suggested the Indian head Savage logo. Likely, Thaw saw this logo on a box of ammunition or maybe even on a Savage-made Lewis machine gun box. Regardless, the Savage Indian head was painted on the fuselage of all the Escadrille’s airplanes.

In the 1990’s Savage started to become a consumer-sensitive company. They began listening to what consumers wanted and this took Savage into the niche rifle market. They now offer a wide range of rifles specifically designed to appeal to certain and often small segments of the consumer market. For example, Savage offers several predator and varmint hunting rifles, youth rifles, a hog hunting rifle and even a rifle designed specifically for use in the Alaskan bush. The Savage Lady Hunter is the latest edition to this diversified line.

Savage recognized that more and more women were becoming interested in hunting. (Women shooters are the fastest growing demographic within the shooting sports.) Secondly, Savage also realized there were no commercially manufactured rifles properly configured for women. The Lady Hunter was the answer, but the interesting side of this story is how this latest iteration of a Savage model 11/111 bolt-action came to be.

Instead of a bunch of Neanderthal men sitting around a table pontificating about what a ladies’ rifle should be, Savage asked women hunters what they wanted. They learned women wanted a good looking rifle that was not pink.

They also wanted a rifle that fit them and was comfortable to shoot. Instead of just taking these suggestions and building a rifle and selling it, Savage put some prototypes out there for women to try on. With the feedback from these fittings, Savage tweaked the design until they reached a popular compromise that fit a large percentage of women. 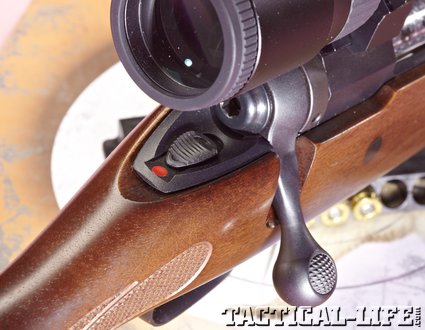 When you first look at a Savage Lady Hunter you’ll notice it’s different. It’s different because men and women are—this should come as no surprise— different. You see, women have long, slender necks. Men don’t. Women also have narrower, lower, slimmer and softer shoulders. And, women do not brag about or take pride in shooting a rifle that kicks like a double shot of bourbon. Ladies might suffer a pair of high heels for a night on the town, but they won’t shoot a rifle that beats them senseless.

The key to the fit of the Lady Hunter is the uniquely shaped stock. It has a very high comb, which is deeply recessed on the right side. The wrist or grip is thinner and the angle of the butt pad is exaggerated. This allows for a much better interface with a woman’s body and compensates for the shorter fingers, longer necks and differently shaped shoulders. The shape of the comb also allows a great deal more flexibility in scope positioning.

Savage did not stop with the stock. Women don’t typically have the upper body strength of a man, so keeping the rifle light was important too. But a flyweight rifle was not Savage’s goal—after all, less weight means faster recoil velocity. The idea was to reduce the weight that had to be supported by the support arm while shooting, so Savage installed a 20-inch version of their lightweight barrel. Aside from all these unique features, the Lady Hunter is your typical Savage model 11/111 rifle. It’s equipped with the excellent Savage AccuTrigger, a detachable box magazine, Weaver-style scope mounting bases, a three-position safety, sling swivel studs and pillar bedding. 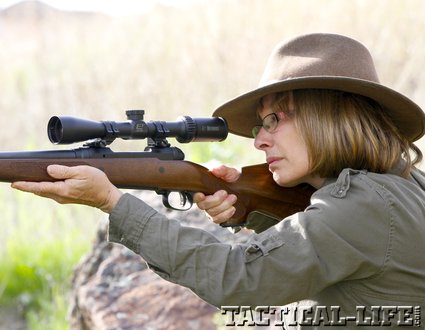 From the bench the Lady Hunter did well. It fed smoothly from the detachable magazine and you could even drop a single cartridge in the ejection port—on top of an empty magazine—and the rifle still fed flawlessly. It shot well too. As Winnie the Pooh would say, it was a very blustery day on the range when the rifle was tested. I had some issues with horizontal stringing due to a gusty, 20 mph crosswind. Still, I managed a few sub-inch groups. Overall for nine, five-shot groups with three different loads the average was 1.40 inches.

But what business do I have testing a ladies rifle? My wife Drema is just becoming interested in hunting and she’s a Gunsite graduate. I figured her a better barometer of how this rifle might work for a woman. After all, it was designed for people just like her. Drema liked the rifle and commented it fit her well. She said it was comfortable to shoot—based on her shooting, I couldn’t argue. Working from various positions she had no problem getting kill zone hits on a deer target out to 100 yards. Her only real issue with the rifle was struggling a bit to open the bolt with the rifle on her shoulder. I did not think cocking action was too difficult, but you have to remember, this was all new to Drema. Meanwhile my sister who has been shooting all her life had no problem with the bolt.

That’s What She Said

The bottom line is, women want something that’ll work for them, and it seems Savage has done an excellent job by configuring a rifle that will. I must commend Savage for their efforts—based on what I’ve seen so far in 2012, the Savage Lady Hunter might be the most innovative if not the most important new rifle of the year. To learn more, visit savagearms.com or call 413-642-4262. 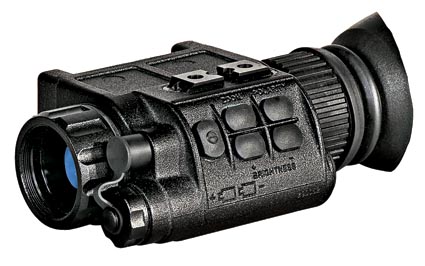