0
SHARES
22
VIEWS
Share on FacebookShare on Twitter
Each Lancer L15 lower kit comes with three add-on magazine wells that are simple to install. They are (counter-clockwise from far right) an oversized well for competition, a medium well for tactical operations, and a small well dimensioned like a standard AR.

The AR-15 has been with us for a half century. While the U.S. military is looking for the next generation of battle rifle, and even though several new-age designs (SCAR, HK G36, etc.) have been created, it appears the AR platform will remain for years to come. With this in mind, is there room for enhancement? Yes, and that is where Lancer Systems enters the picture.

When most readers think of Lancer, they likely think of magazines, but the company offers much more than that. The creators of the renowned translucent polymer AR magazine also make exceptional carbon-fiber forends and enhanced lower receivers for the proven AR design. After taking a hard look at how an AR lower needs to be built for maximum performance, Lancer introduced an enhanced lower that was built for the battlefield but has been well-received in competition circles and is effective for LE use. 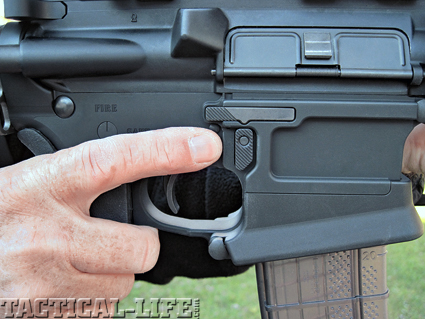 Another unique feature of the L15 lower is the ambidextrous bolt release lever, located above the oversized magazine release button.

Options
Before discussing the L15 lower in detail, it should be understood that Lancer offers the end-user options so they can buy only what they really need. The first option is a stripped lower with just magazine release hardware. The second option is a complete lower minus the trigger. Option Three is a complete lower ready for mating with an upper, including the hand grip and stock. Option Four is just like the previous option, but it comes with a premium match-grade trigger.