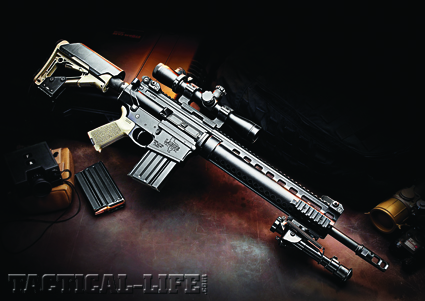 LaRue Tactical has been manufacturing optics mounts and AR uppers for several years, earning a reputation for their exceptionally high-quality machine work, fit and finish. Their uppers are some of the most accurate uppers on the market and their quick-detach mounts are known for their un-paralleled ability to hold their zero no matter how many times they are attached to and removed from a rifle.

About a year ago, LaRue Tactical announced that they would be building a semi-automatic 7.62x51mm (.308) AR style rifle. Immediately following Mark Larue’s announcement, Obama took office and all things AR dried up overnight. As the wildfire gun buying swept the nation, anything remotely associated with AR rifles was consumed by the panic-driven blaze. Manufacturer’s backorder lists reached 18 months in length and normally plentiful parts like bolts, bolt carrier groups, gas tubes and magazines were suddenly unavailable.

LaRue Tactical wasn’t going to let the dearth of everything AR prevent them from producing the Optimized Battle Rifle. The list of parts that they would be required to produce in-house steadily grew to soon include items like the bolt carrier and magazine, parts AR manufacturers normally subcontract out. LaRue Tactical capitalized on each production setback, using the production delays to conduct exhaustive live-fire testing of each component as they were produced. No one knows exactly how many rounds were fired through Optimized Battle Rifle rifles over the past year of research and development, but conservative estimates place the round count at over 30,000.

Gun Details
The Optimized Battle Rifle is the result of over a year of intense research & development all focused around the goal of producing the most accurate and reliable 7.62mm AR on the market. The feature that immediately grabs the eye is the unique handguard and how it attaches to the upper receiver. One of the design goals at LaRue Tactical was to incorporate a truly free-floating barrel into the design of the rifle. On a normal AR, the handguard attaches under the nut that joins the barrel to the rifle. Another nut is then required to anchor the handguard to the upper receiver to prevent it from twisting under user-applied torque. All of this interaction occurs at the rifle’s tenon, an area critical to the rifle’s accuracy. The tenon on an AR is the only place where the barrel touches the upper receiver. Any stress applied to this region of the rifle through the handguard (like when we load the bipod legs or apply tension to a two or three point sling) will result in accuracy loss. 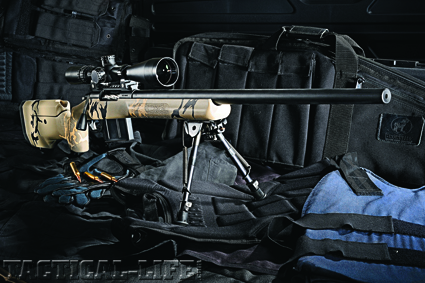