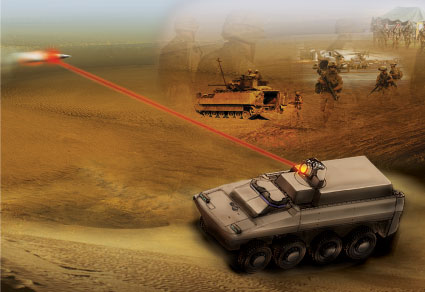 Cannon-cockers like precision. Once they factor atmospheric conditions into firing solutions, they have high confidence that the projectiles they fire will follow predictable parabolic paths and strike exactly where they aim, whether or not they can see their target. In almost every case, inaccurate artillery results from wrong measures of the environmental conditions that affect fire, not the physics that governs a shell’s track. Regardless of accuracy, however, artillerists have long enjoyed the certainty that once they pull the lanyard, feed the tube or flip the switch, almost nothing will stop a shell, mortar round or rocket until these weapons impact the ground.

Two exceptions to the rule involve land- or sea-based air defense missile systems such as the Patriot or Standard, and the ship-borne CWIS (close-in weapon system), a high-speed gun that can fire 3,000 rounds-per-minute at very close range to interpose a destructive curtain between an incoming projectile and a vessel. Both defenses rely on complex sensor systems, usually independent from the weapons themselves and perform best against weapons fired from miles away, inbound in obstacle-free open skies. Because air defense batteries use projectiles and missiles that require time to launch, accelerate and fly interception routes, these systems are only effective against missile-sized targets with measurable radar cross sections that make them detectable over long distance tracks, even though they travel at high speed. Artillery shells are simply too small and will close too quickly from relatively short ranges to allow detection and interception before they hit home.

Clearly, weapon developers who want to counter artillery cannot rely on similar systems to overcome the threat of incoming fire with consistent success. Instead, engineers want a mechanism with sufficient power and speed to overcome the fastest target, regardless of size or trajectory. Fortunately, a solution has been available for more than 40 years—light amplification by stimulated emission of radiation, better known by its familiar acronym, the L.A.S.E.R.

The principles of laser operation are beyond the scope of this article, but a typical device emits light in a concentrated, monochromatic pencil beam, if it functions in the visible spectrum, within a defined wavelength. Military lasers usually operate in the infrared spectrum and are undetectable by unaided human vision. By contrast, conventional light sources emit over wide areas and wide wavelength spectra. Properly configured lasers have tremendous power. Industrial instruments routinely cut steel in complex patterns. It also helps to move at nearly 200,000 miles per second. 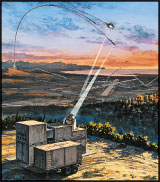 With that capability in mind, the U.S. Army teamed with TRW, subsequently acquired by Northrop Grumman, and the Israeli Ministry of Defence to develop a tactical high-energy laser to demonstrate the concept of directed energy air defense. On June 6, 2000 the THEL/ACTD (Tactical High Energy Laser/Advanced Concept Technology Demonstrator), a purpose-built defensive system test bed, successfully intercepted and destroyed a Katyusha rocket fired at White Sands Missile Range in New Mexico, the first such demonstration involving a defensive weapon in history. In just seconds, the THEL/ACTD locked on target after the 10-foot-long, 5-inch diameter rocket launched and projected a destructive beam from its high-energy chemical laser that exploded the Katyusha in flight. Laser beams had destroyed rockets as early as 1996, but utilized large facility-based systems. THEL/ACTD test firings later in the year took out more than 25 rockets, including salvos of two Katyushas fired in quick succession, earning the device kudos from Popular Science magazine as the grand winner of the “Best of What’s New” contest in the General Technology category.

Way Faster Than a Speeding Bullet
According to Joe Shwartz, Director of Northrop Grumman’s Land and Sea Based Laser Defense Systems, initial tests using 25 kW of solid-state power were successful. This year, the team will test a similar mechanism at the 100kW level. The power requirements for an operational solid-state laser are classified, but clearly higher than those previously tested.

Shwartz certainly knows his business. He has been affiliated with laser developments for years and served as program manager for the THEL system from 2001 to 2005. As for turning what seems like a science fiction project into reality, he is very bullish. “Prospects are good for this system,” he noted. With solid state power, Shwartz added, “We can go in two directions. We expect to develop solid-state, high-energy laser technology with fielding scheduled for about 2013. This is the system, with portability advantages, the Army clearly wants. For fixed systems, however, we can use chemical lasers if that’s called for.”

Northrop Grumman is relying heavily on work completed in its previous testing, and the tactical laser will use similar beam directors and controls for the new defense system, although the beam itself is new.

Power requirements for the tactical laser are not continuous, Shwartz explained. “The solid-state approach requires several seconds to enable operation, what we term duty cycle. While it is not instantaneous, it requires just seconds to power up and project a high-power pencil beam,” he said. “The beam strength is formidable, and high enough to destroy both projectile structure and internal guidance systems.” Clearly, once the laser acquires a target, whether missile, rocket or shell, and strikes it in flight, its journey through the sky will end.

Skyguard: Filling a Defensive Gap
The tactical system is an urgent program for Northrop Grumman because it addresses target applications for which no defenses currently are available. They recently also began offering a fixed defense system, named Skyguard, for use around airports, military bases or other large, permanent facilities.
Skyguard derives from the THEL test bed and also incorporates several system improvements. The crew-served system can defend large facilities against artillery or even shoulder-fired or MANPADS (man-portable air defense missiles), within a protective radius of up to 6 miles in diameter. The DHS (U.S. Department of Homeland Security), ever mindful of the threats to commercial air travel and civilian passengers that armed terrorists may pose, quickly focused on Skyguard as a potential solution to the problem of random, surprise attacks of surface-to-air missiles against jetliners.

Northrop Grumman proposed Skyguard to DHS, and the department continues to evaluate its applicability for the airport defense mission. According to Shwartz, “DHS wants fully developed technology, with no risk of implementation. They are looking at TRL (technology readiness levels) 6 or 7 before they proceed. When Skyguard is fully ready,

however—and it will be—then they’ll be interested in acquiring the system for airports around the country.” As is always the case, the government must evaluate system costs against capabilities, including range and reliability. Skyguard must of course operate flawlessly. Failure in the civil aviation environment could cost hundreds of innocent lives.

Tomorrow’s Weapon Needed Today
In any case, laser energy rapidly is developing into a viable defensive weapon system. It operates with blinding speed and the supporting target acquisition and control systems already have proven their effectiveness in dozens of successful tests. In both fixed and portable versions, the high-energy laser system has the versatility to overcome a variety of threats precisely and efficiently. Lasers will not readily translate into individual weapons, taking the place of firearms. “Given current technologies, we can’t develop a laser system small enough for practical individual use,” Shwartz explained. “There are, however, other directed energy and other applications, both lethal and non-lethal, that may very well move forward on similar tracks.”

If they are developed, such weapons could be transformational and actually make large-scale warfare far less viable. Despite today’s system accuracy and lethality that are significantly more precise than the last generation of widely used weapons, troops are willing to fight because the odds of getting hit remain relatively low.

Defensive laser weapons have demonstrated this level of inevitability and that translates into bad news for cannon cockers. In the near future, artillery and missile troops may have to contend with a countermeasure that undermines the confidence they have enjoyed till now that once a round is fired, their targets face destruction. Joe Shwartz is quite sure that lasers will come to dominate the battlefield and defend against incoming fire. He concluded, “It’s bound to happen.” 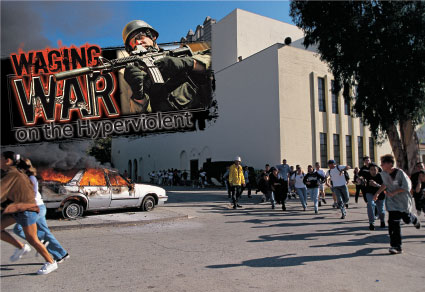 Waging War on the Hyperviolent

Cannon-cockers like precision. Once they factor atmospheric conditions into firing solutions, they have high…