0
SHARES
1
VIEWS
Share on FacebookShare on Twitter
The XADS TALI-250X is a handheld laser unit that provides LE officers with a blinding less-lethal laser option for specialized applications.

This is an amazing time for law enforcement in terms of technological advances, particularly in the area of less-lethal force interdiction. Oftentimes these advances don’t totally replace existing equipment or techniques. They merely supplement and enhance existing modalities.

For instance, a particular device’s effectiveness and versatility has been increased by combining it with other devices; there are Taser mounts to add the Taser X26 to the rails of an M4-type carbine, pepper sprays have been added to police flashlights, and laser beams now see regular service as close-range sighting systems for pistols, shotguns and rifles. Which brings me to the topic at hand: the Xtreme Alternative Defense Systems (XADS) Threast Assessment Illumination Device (TALI) green laser threat interdiction system.

The fact that the XADS TALI’s laser is visible in indoor lighting conditions is indicative of the power of the unit.

TALI-250X
I first encountered XADS at a recent weapons show. I was walking by their booth when I spotted their big boy system, the TR3 Counter-Piracy/Border Security Laser Rifle. The 2.5- to 3-watt TR3 rifle, at a price in the range of $24,900, is designed not to vaporize pirates and their boats as they approach a ship with intent to board, but to interdict their ability to see their way to the ship in the first place—without causing permanent eye damage. 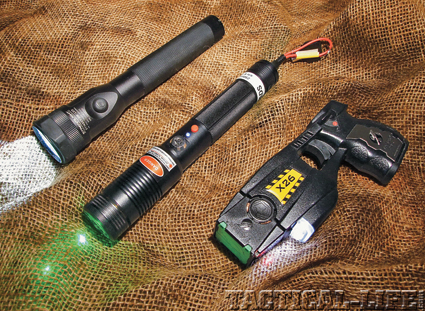