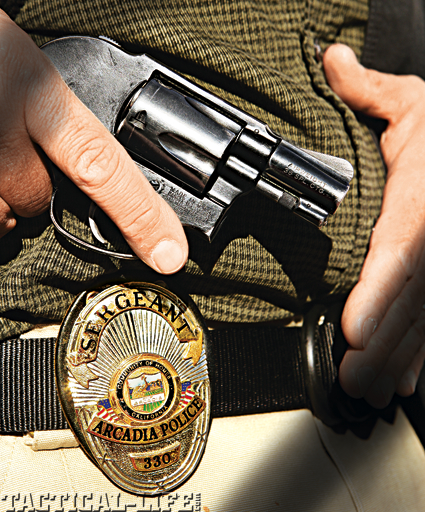 Many officers consider the J-Frame the ideal backup gun…utterly concealable and reliable.

When I was in the Academy back in 1991, I was stumbling about a local cop-shop looking to buy my first gun for when I hit the streets. My department had already issued me my Glock 17, but I wanted something for off-duty and was looking at some sexy little Beretta when one of the clerks – who was also an officer – asked me what I was looking for. I explained that I would be graduating soon, and wanted something for off-duty.

I had figured I would get a backup later, but he suggested that I pick something that would fill both roles. He pulled out a newly introduced Smith & Wesson Model 640 in .38 Special and suggested, “For a backup, you get ‘Five for Sure’ – this thing won’t jam on you. Also, five shots should be enough to get you out of trouble, but not enough so that you get yourself into trouble.” Shortly thereafter I had my 640 paid for.

That little J-Frame went everywhere with me for many years afterwards. I traded it away once, but got it back out of nostalgia. I finally put it in the gun safe after buying another J-Frame, the 342 PD—a Titanium Lightweight. That gun slips in a pocket, goes on an ankle, and is my common companion.

It’s funny, but in today’s world of fancy semi-autos, most of my friends carry a J-Frame of some sort. But why is a design that is over half a century old still thriving?

History
Smith & Wesson unveiled their new J-Frame in 1950 at the International Association of Police Chief’s Conference. Accordingly, they labeled the new gun the “Chief’s Special” and the name has stuck ever since. Later, it became the Model 36 when S&W went to model numbers. For their “Centennial,” Smith & Wesson introduced a model (later called the Model 40) that was hammerless and used a “lemon squeezer” style grip safety. In 1965 they created a stainless steel version called the Model 60.

Over the years countless versions have come about; alloy versions to make them lighter and hammerless versions for concealment. My 342 weighs in at around 10 ounces empty. This gun has been discontinued for the .357 Magnum version 340 PD, which is easily the most popular backup gun I see in the field. Like I said, most of the cops I know opt for the .38 snub-nosed revolver in one manner or another, most in the lighter weight alloys.

Advantages
The J-Frames’ advantages are summed up in two words — concealable and reliable. For these two reasons, it is still the ideal backup weapon.

Like I was told before, it’s “five shots for sure.” These guns can and do take a beating, on officer’s ankles or in pocket holsters, yet still keep running. Guns on ankles fall prey to lint, dust bunnies, and all other kinds of grime. While anyone in our line of work needs to maintain their weapon, as a rule revolvers need less dedicated work.

The controls on a revolver are simple; a cylinder release to load/unload, and a trigger. Just point and shoot. For people who are not big “shooters” this is an added plus. Combine that with some of the even more powerful magnum-powered J-Frames and this is a winning combination for even the bigger adversaries.

While the size difference between something like a mini-Glock and a J-Frame is negligible, a J-Frame just conceals better. I can’t really explain it objectively, it just seems that the irregular shape of the revolver conceals better. For many years the handgun industry used aluminum alloys to make guns lighter and easier to carry—then along came S&W’s Titanium and Scandium revolvers, making guns that weigh less than a pound. With these newer ultra-light revolvers, the weight is not even close to a similarly sized automatic. You may not really complain about weight, as I get older I sure notice it.

One note that we don’t always mention is that a revolver is pretty affordable as well. If you can’t buy a brand new 340 PD at around $700 to $800, you can always find a gently used Model 60 in Stainless Steel for about half of that. S&W has also come out with the “M&P” series of revolvers that use a blackened stainless steel cylinder instead of titanium.

In speaking to people at Smith & Wesson, they let me know that J-Frame snubbie sales are going well for the Massachusetts’ firm, with the aluminum .38 Special models being very popular, outselling even the magnum versions. This is based on the higher cost of the magnum guns (usually in scandium / titanium) and how the magnum recoil is a bit on the harsh side for most people. With the continued expansion of the CCW market, sales continue to get a boost.

Modern Ammo
Many people have shied away from these little revolvers because of the idea that their short barrels wouldn’t always allow a projectile to get enough speed to properly expand. Now that issue is even in doubt. Before, the old “standby” was a lead, semi-wadcutter hollowpoint (LSWHP) 158-grain projectile. But in today’s modern ammunition factories, there are new powders and projectiles being put together for the snubbie.

Companies such as Speer Gold Dot have created duty rounds made specifically for 1.88-inch revolvers. They worked in conjunction with NYPD to create a 135-grain JHP, made to reliably penetrate and expand with the ever-popular guns like the 1.88-inch J-Frames. I recently tested a batch of this ammo and was rewarded with 1-inch groups at 7 yards while shooting off-hand from my trusty 640. In my all-steel gun, these .38 Special +P were quite controllable. In the ultra-light 342 PD they were pretty stout, but still manageable. Then again, this gun is for a backup, not for target practice.

Other manufacturers such as Buffalo Bore also make loads specifically designed for maximum performance out of the 1.88-inch snubbies. The aim is to keep the barrel length from allowing the round to lose too much velocity. The more that ammunition companies work to meet this need, the better these rounds will become.

Today’s J-Frame can benefit from more accessories than just about anything, aside from a 1911. There are holsters such as the DAH from Don Hume, or the Speed Scabbard from legendary Kramer Leather. Ankle holsters from Alessi, DeSantis, or Renegade are also readily available. If the stock grips don’t work for you, you can find soft rubber ones from Pachmayr or Hogue. Wood grips are made by too many companies to count, and companies such as Tyler’s makes the T-Grip to adapt your J-Frame to a grip area that fills your hand without increasing the footprint of the gun.

If the sights are not to your liking, Crimson Trace makes Lasergrips to better adapt the gun to point and shoot accurately for you. There are also fiber optics or night sights available for these guns as well as different options.

Final Notes
Smith & Wesson has acknowledged the value of the J-Frame by the re-introduction of the famous Model 40, a hammerless .38 with a unique grip safety. Speaking with them, they cannot give out exact numbers due to the sensitivities of being a publicly traded company, but they did say the J-Frame is still one of their best sellers. Why shouldn’t it be? If you are looking for a small, potent, and reliable gun to bet your life on, the J-Frame has more experience and success than any other gun out there. Bet on a proven winner. Find out more from Smith & Wesson at smith-wesson.com or call 800-331-0852. 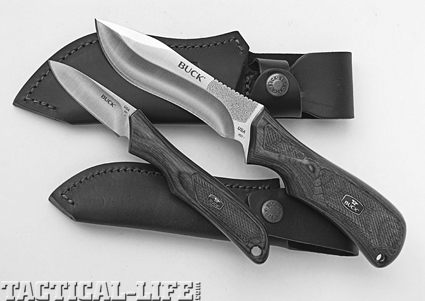 Many officers consider the J-Frame the ideal backup gun…utterly concealable and reliable. When I…