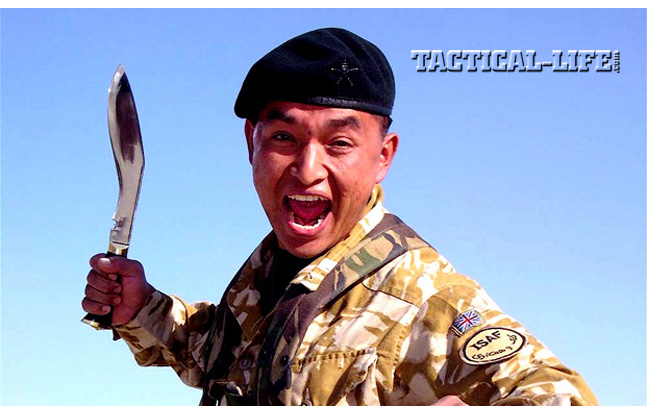 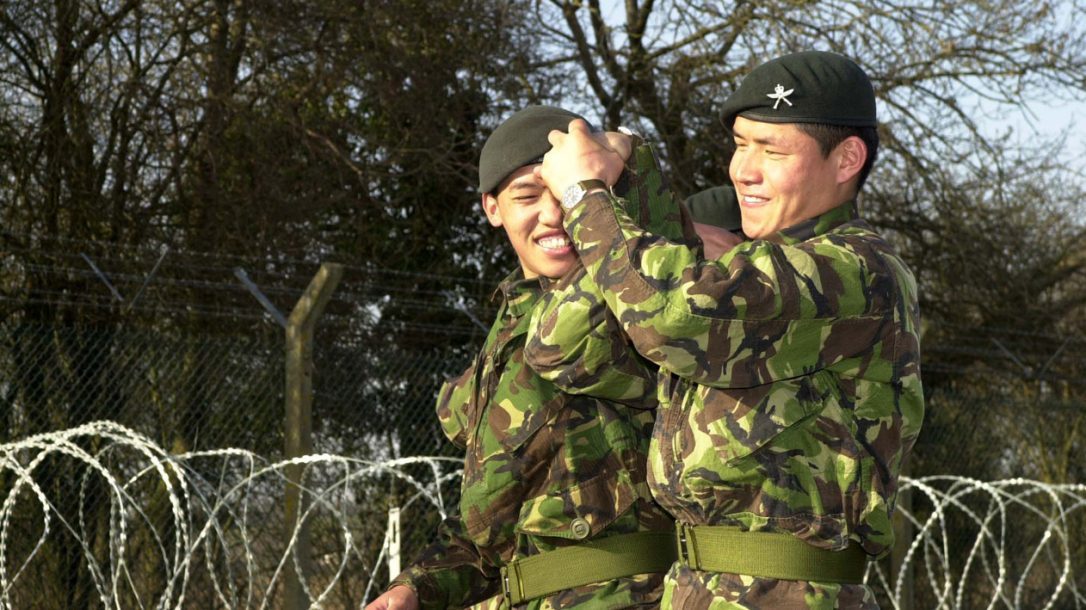 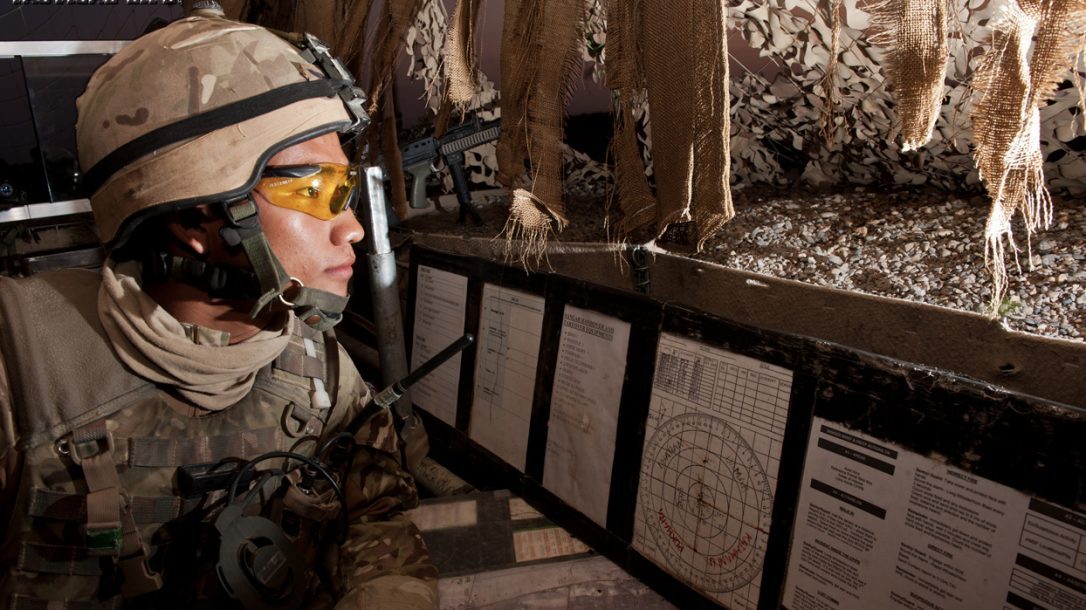 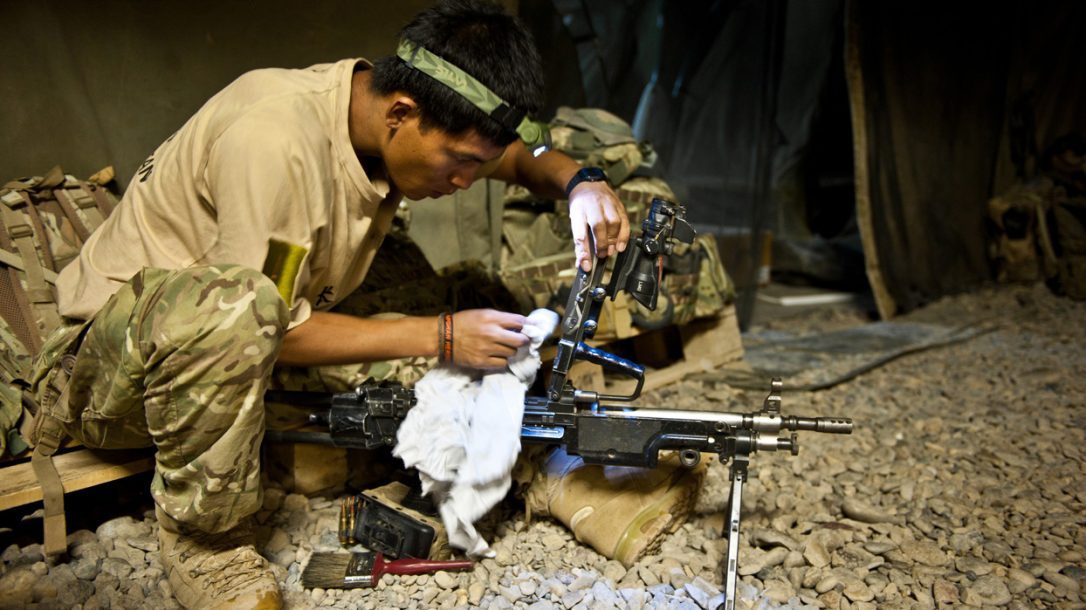 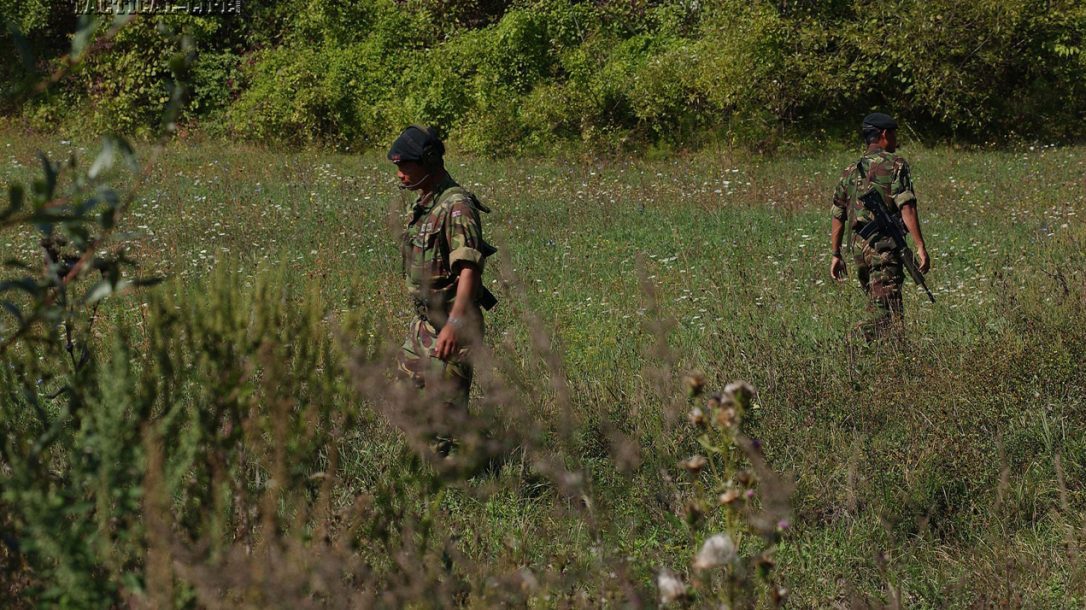 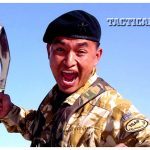 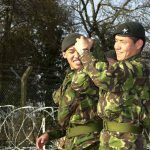 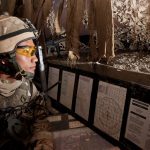 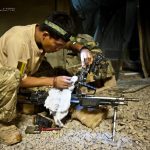 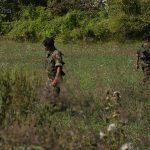 Among the world’s soldiers for hire, two groups stand out for their history of courage and loyalty: The French Foreign Legion and the Gurkhas. In fact, because they have served one country loyally for so many years, the French Foreign Legion and the Gurkhas are exempt under U.N. protocols regarding “mercenaries.” Gurkhas first entered the forces of the British Empire early in the 19th century, after the Gurkha War (1814–1816) against the army of the East India Company. So impressed were the British with the Gurkhas that, in the consequent peace treaty, it was stipulated that the British could recruit Gurkha soldiers to serve in the East India Company’s army.

Recruited from various hill tribes of Nepal, Gurkhas served in the army of the British East India Company until 1857, when this private army was disbanded and the Gurkha troops were incorporated into the imperial British Indian army. They had proven especially loyal during the Indian Rebellion of 1857, when many of the Indian troops of the East India Company murdered their British officers as well as British civilians. British troops who had served alongside the Gurkhas developed a close bond with them. Traditionally, the they have especially strong ties with Scottish regiments—the two groups of highlanders from opposite sides of the world get along very well. In fact, the Gurkhas would eventually adopt the bagpipes for use in the their regimental bands. When I was a student in Edinburgh, I used to watch pipe and drum training at the British Army School of Bagpipe Music and Highland Drumming and especially enjoyed watching the Gurkha pipers.

From 1857 until 1947, when India gained its independence from Great Britain, the Gurkhas served in the Indian army, seeing extensive combat along the Indian frontier, including in the Third Afghan War (1919), World War I and World War II. During WWII, ten Gurkha regiments served, each with three or four battalions, with a total of 250,280 Gurkhas ultimately serving in the war. At least some received parachute training during this time. There is a famous story, which may be apocryphal, but I first heard it from a girl whose father was an officer in the unit. Reportedly, when told they would make their first training jump from 800 feet, a Gurkha havildar (sergeant) asked if perhaps they could make the first jump from 400 feet. However, the British training sergeant replied that the parachutes would not open at 400 feet, to which the havildar replied, “Oh, we will have parachutes. Then it is alright.” No fear. Later, from 1963 to 1968, there was the Gurkha Independent Parachute Company.

India & Beyond
After India’s independence, some Gurkha regiments chose to serve in the army of India, while others chose to join the British army. The four Gurkha regiments (2nd King Edward VII’s Own Gurkha Rifles, 6th Queen Elizabeth’s Own Gurkha Rifles, 7th Duke of Edinburgh’s Own Gurkha Rifles, and 10th Princess Mary’s Own Gurkha Rifles) that chose to stay with the British army formed the Brigade of Gurkhas. Initially, the Brigade of Gurkhas was stationed in Malaya, where they fought in the counterinsurgency war against communist guerrillas. During the 1960s, Gurkhas fought in Borneo against Indonesian guerrillas threatening Brunei. So impressed was the sultan of Brunei that he later hired 2,000 Gurkhas to serve in the Gurkha reserve unit, which protects the Sultan, his family and oil installations. Two Gurkha battalions serve in the Nepalese army, and the Singapore police has a contingent of Gurkhas who guard key installations and act as its reaction force.

Gurkhas served in the Falklands War, where they proved an invaluable tool for psychological operations. Argentine propaganda had been broadcast about the “headhunting mercenaries” being sent to the Falklands by the British. Unfortunately, the Argentine conscripts believed their own propaganda. The British found that if they let the Argentines see them sharpening their kukris, the conscripts would often surrender rather than face kukri-wielding Gurkhas. The kukri is, of course, the traditional Gurkha edged utility and combat blade. Its distinctly curved blade allows it to be swung with great force capable of decapitating a sacrificial animal or a man. Myths abound about the kukri, including that if the Gurkha draws his kukri, it must draw blood before being returned to its sheath, and that a young Gurkha does not feel he is truly a soldier until he has made a kill with his kukri.

For many years, their regiments were stationed in Hong Kong to provide security along the border with China, but once control of Hong Kong returned to the Chinese, these units were pulled out. More recently, they have served in Iraq and Afghanistan as well as Kosovo. They have also been deployed as part of peacekeeping forces in Bosnia, East Timor and Sierra Leone. Traditionally, Gurkha officers were British, though now a substantial number are Nepalese. Often, the top graduates of Sandhurst compete for a commission in the Brigade of Gurkhas, an assignment that requires learning Gurkhali. Assignments are fewer as the brigade has been cut back to two battalions due to the British army’s downsizing. Four Gurkha regiments were consolidated into the Royal Gurkha Rifles with a current strength of about 3,400. By comparison, up to 100,000 serve in the Indian Gurkha regiments.

Training
Competition to serve in the unit is fierce—30 or more applicants for each opening show up for selection in Nepal. Those who meet basic intelligence, initiative and physical requirements—usually 270 candidates per year—move on to training for either the Singapore police or the British Gurkha Rifles. Those selected receive nine months of training in the UK covering military skills, Western culture and customs, English, weapons proficiency and physical fitness. Those Gurkha trainees who show special aptitude at mathematics are often assigned to the Queen’s Gurkha Signals or Queen’s Gurkha Engineers. Female Gurkhas serve in the Royal Army Nursing Corps or in some other slots open to female soldiers. Gurkha soldiers who have completed an initial enlistment in the Gurkha Rifles are now eligible to enter other British regiments. At least some have joined other elite units such as the Parachute Regiment and the Special Air Service. Like the red beret of the Parachute Regiment, the green beret of the Royal Marine Commandos and sand-colored beret of the SAS are symbols of elite units; so is the Hat Terai Gurkha worn by Gurkha soldiers. It is normally only worn on parade or special occasions, though. The rest of the time Gurkhas wear a beret or Kevlar helmet. A contingent of 120 Gurkhas served with the Parachute Regiment at one point and wore the maroon beret with the crossed kukris cap badge.

Currently, Gurkha veterans who have completed four years of honorable service are eligible to settle in the UK, and those who reach retirement are eligible for a pension equal to that of other British soldiers of the same rank. Some Gurkhas after leaving the Gurkha Rifles have worked as security contractors. One British former Gurkha officer founded a company that supplies Gurkhas for security jobs.

Weapons & Gear
Although the Gurkhas are famous for the use of the kukri, they are also known for their skill with firearms, often placing highly in British army marksmanship competitions. For the most part, Gurkhas use the same weapons as other British infantrymen. The Gurkhas’ primary weapon is the L85A2 bullpup rifle, though they have at times been issued versions of the M16. Some Gurkhas are also issued the L86A2 Light Support Weapon, a light-machine-gun version of the L85A2 with a longer barrel and bipod. Gurkhas who function as designated marksmen are armed with the L129A1 Sharpshooter rifle produced by LMT. Gurkha snipers use the 7.62x51mm Accuracy International L96 or the .338 Lapua L115A3. I believe that the Gurkhas have used the P226 (L105A1) as their primary pistol, but this may have been replaced with the Glock 17, which has been recently adopted. Heavier weapons include the L108A1 or L110A1 Minimi light machine gun and the L7A2 general-purpose machine gun also knows as the “Gippy.” Each infantry section will also have one AT4 84mm antitank weapon or two, and two L72A9 light anti-structure munitions.

The Gurkhas rank as one of the most famous and elite military units in the world. They are beloved in the British army and by British citizens. On the occasions when they pull ceremonial duty at the Tower or Buckingham Palace, many Londoners who normally avoid the Changing of the Guard ceremonies turn out to see the Gurkhas—at least the ones I know do! Among the enemies of Great Britain, the Gurkhas may not be so beloved. Their famous war cry, “Ayo Gorkhali!”—“The Gurkhas are coming!”—can still strike fear on the battlefield. 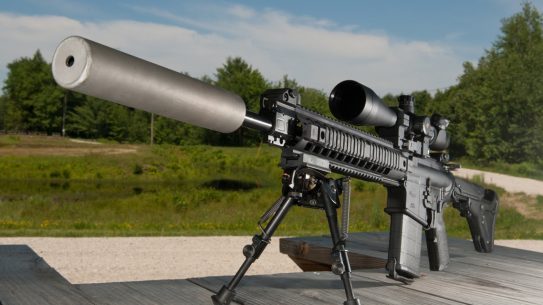