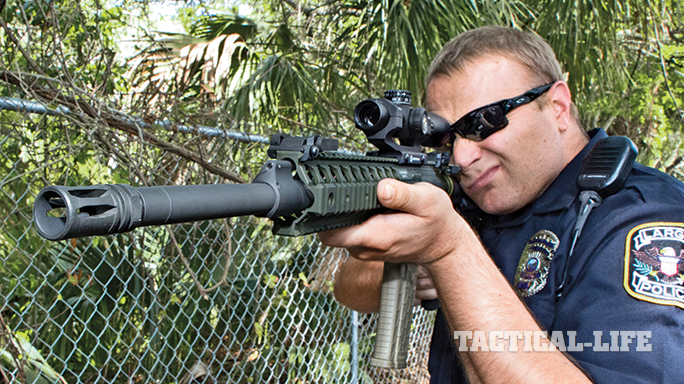 1 of 3
Gun Test: Lewis Machine & Tool’s CQBODGB
The accuracy of the LMT CQBODGB carbine provides patrol officers the ability to end a violent confrontation quickly while minimizing the danger to innocents. 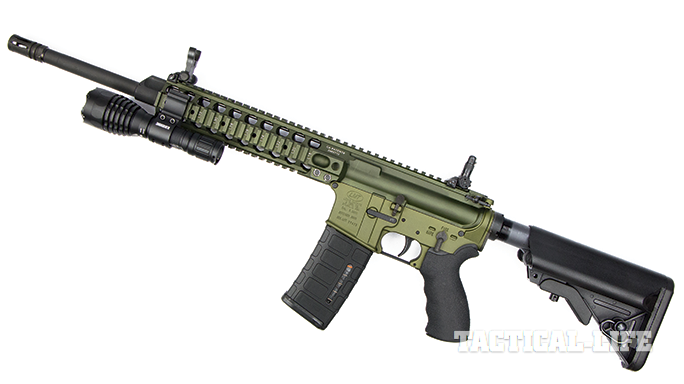 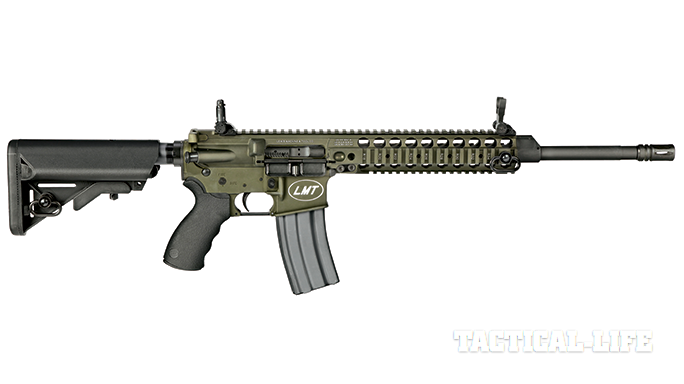 3 of 3
Gun Test: Lewis Machine & Tool’s CQBODGB
Finished in an olive drab color, the accuracy of the 5.56mm LMT CQBODGB will surely turn other rifles green with envy. It has a truly monolithic upper assembly, a cryogenically treated barrel and many more top-notch upgrades. 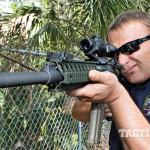 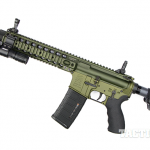 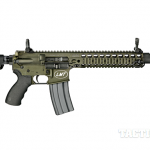 Sometimes there is a rifle that just flat-out impresses you with its reliability, accuracy and finish. The CQBODGB from Lewis Machine & Tool (LMT) is one of those rifles. Let me introduce you to this incredible gun.

CQBODGB stands for “Close-Quarter Battle Olive Drab Green,” with the latter “B” indicating it has black furniture. As the name suggests, the gun has primarily an olive drab green finish and is designed for combat. The gun is built for harsh environments yet has an appearance that makes it perfectly suitable for display next to any safe queen.

The 16-inch barrel has a heavy contour and is chrome lined. The rifle has a 5.56mm NATO chamber and can safely fire .223 Remington ammunition. The barrel has a 1-in-7-inch twist rate, meaning it can stabilize the longer, heavier bullets in this caliber. LMT cryogenically treats these barrels for improved accuracy and barrel life. When I got the CQBODGB rifle to the range, I was very impressed with how accurate the gun was—especially with 69-grain Sierra MatchKing bullets.

LMT uses a truly monolithic upper on the CQBODGB. This means that the upper receiver and forend are all one piece machined from a single aluminum forging. This allows the rifle to have a free-floating barrel while still providing incredible strength for harsh duty. Additionally, with the upper receiver and handguard rails perfectly aligned, a scope can be mounted well forward of the charging handle without any concerns.

On this rifle, Lewis Machine & Tool uses a direct gas impingement operating system and equips the gun with a low-profile gas block. The gas block is just forward of the forend for easy access. However, the gas tube is completely shrouded and protected by the forend.

In addition to the full-length Picatinny rail on the top of the receiver, the CQBODGB’s forend offers roughly 8 inches of Picatinny rail space on each side as well as the bottom. This will allow a shooter to add nearly any accessory he wants. Throughout my testing, I tried a number of flashlight mounts from various companies and found they all worked perfectly on the rails.

A SOPMOD stock is standard on the CQBODGB. The SOPMOD stock is adjustable for length of pull and has a pair of battery holders built in. Each holder can store four CR123 batteries—for a total of eight—to provide backup power to any optic, white light or other accessory that the shooter might have. The battery compartments are long sleeves with double O-rings on the cap to keep the power cells dry.

“Lewis Machine & Tool builds premium rifles, and the CQBODGB is an exemplar of the company’s attention to detail.”

The battery compartments require a swell in the width of the stock. This swell serves as a cheekrest, allowing the shooter to get a better cheekweld when shouldering the rifle. At the tail end of the stock is a rubber buttpad that helps reduce felt recoil. Additionally, the buttpad improves the contact between the gun and body to reduce slipping while shooting and moving.

Optional tactical folding sights ($40 extra) came with the gun. The sights were very usable and folded very flat when I didn’t need them. The rear sight folds flat enough that I had no problem mounting a low-power scope above it.

LMT uses the company’s own tactical charging handle in the CQBODGB. This charging handle is designed to provide easier manipulation of the bolt. I found the handle was easy to operate one-handed, both with and without gloves.

One of the most important aspects of shooting is trigger control, and having a good trigger can really enhance a shooter’s ability to put rounds on target. The LMT trigger has a small amount of take-up with a crisp break. Using my
Lyman digital trigger pull gauge, I measured the trigger at 5.7 pounds on a 10-pull average. That might sound a little heavy to some readers, but I found it to be quite nice. The pull was exceptionally consistent from shot to shot.

Ergo makes the pistol grip used on the CQBODGB to LMT’s specifications. I like Ergo grips on AR-platform rifles, and this one felt very good. The grip surface was relatively soft and grippy without feeling sticky at all. It filled my medium-sized hands very well.

Of course, all of the nice features do not amount to a hill of beans if the gun doesn’t perform. To me, the value of a gun is always determined on the range. Either the weapon will perform, proving its value, or it will not.

As I stated at the start of this article, the CQBODGB carbine proved to be incredibly accurate and reliable on the range. When I headed out to my local shooting club, it was a sunny day with mild temperatures and only the lightest of breezes—perhaps the most ideal of conditions for testing a rifle.

Prior to heading out with the CQBODGB, I mounted a 1.5-4x20mm Leupold Mark AR MOD 1 scope to the rifle. This has become one of my favorite magnified scopes for AR-style rifles. The glass is extremely clear and bright, and I find that a low-power scope works very well for my needs. In addition to the multicoated lenses and waterproofing, Leupold uses a variable-brightness green dot at the center of the reticle for fast target acquisitions. In the Leupold single-piece mount, the scope has proven to be a rock-solid performer.

I laser-bore-sighted the scope prior to heading out, so I was on paper with the first shot. I quickly got things dialed in with some Remington 55-grain FMJ rounds. After about 100 rounds, I pulled out the premium loads and started shooting for groups. I was immediately impressed by the accuracy I was able to achieve with this rifle.

Using a front bag rest, sub-1-inch groups were relatively common with all of the ammo I tried. I’ve never considered myself a bad shot, but the LMT rifle made shooting small groups easy.

One of the loads I had with me was Gorilla Ammunition’s 69-grain Sierra MatchKing OTM ammo. This specific bullet is respected for its accuracy. More than one record has been broken using Sierra MatchKing bullets. In the Gorilla Ammunition load, the bullet performed as well as should be expected. I managed a best five-shot group of 0.63 inches. All of the groups I shot with this load remained under 1 inch.

As the bullet weights got lighter, the groups opened up slightly. With the HPR load using a 60-grain Hornady V-MAX bullet, the best five-shot group measured a hair under 0.69 inches. The Liberty 55-grain load was even lighter and had wider groups, with its best measuring 0.81 inches. While all of the groups were impressive, it did appear that the LMT rifle liked the heavier bullets.

Accuracy without reliability makes a rifle a single-shot gun. Fortunately, LMT delivered here as well with the CQBODGB. I had no failures with any of the ammunition I shot. All of the loads had different bullet designs and weights, and they all functioned flawlessly. I ran the gun with a variety of magazines in addition to the ones included with the rifle. Magazines from Brownells, Hexmag and Troy all functioned as expected.

The SOPMOD stock on the CQBODGB was very comfortable to use, giving me a nearly perfect cheekweld every time I brought the gun to my shoulder. Combined with the soft rubber pistol grip, the stock pulled in tight and really worked well to provide a solid shooting platform.

Lewis Machine & Tool builds premium rifles, and the CQBODGB is an exemplar of the company’s attention to detail. It would be very hard indeed to beat the quality of an LMT build.

Accuracy and reliability are beyond question in this gun. Without reservation, I recommend this rifle to anyone wanting to pick up a top-quality AR-15 for any need, including duty use and home defense. 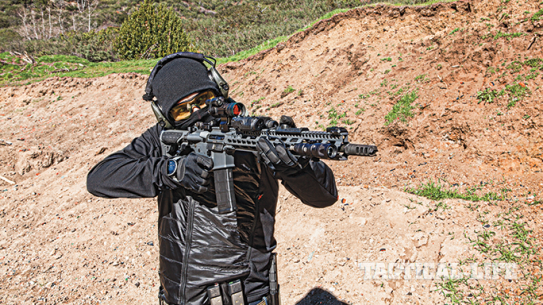 From firearms to accessories and gear, we break down the products that graced the...