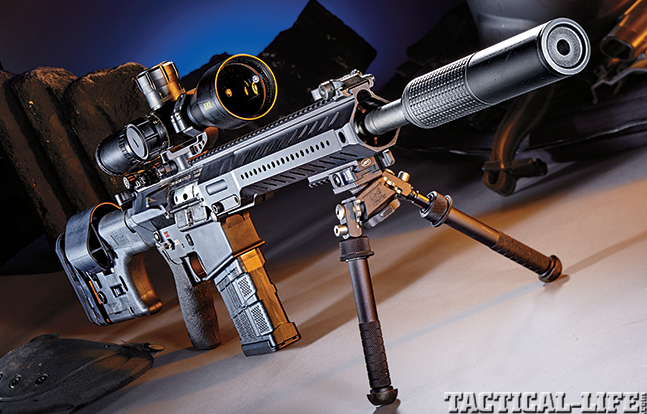 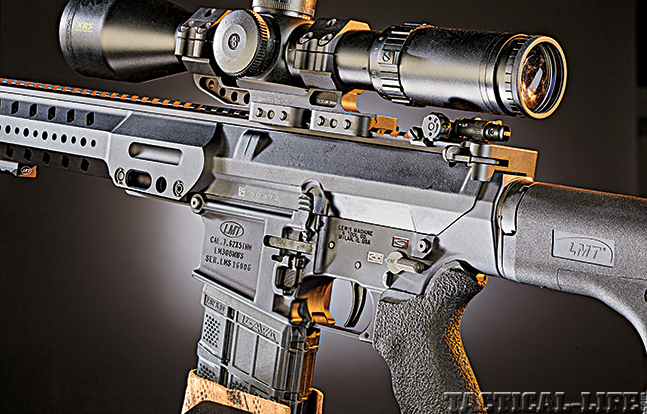 2 of 7
Lewis Machine & Tool’s LM8MWS Features Unmatched Versatility
The magazine release and safety are ambidextrous, and the rifle also comes with a tactical charging handle that is easier to use with scopes mounted. 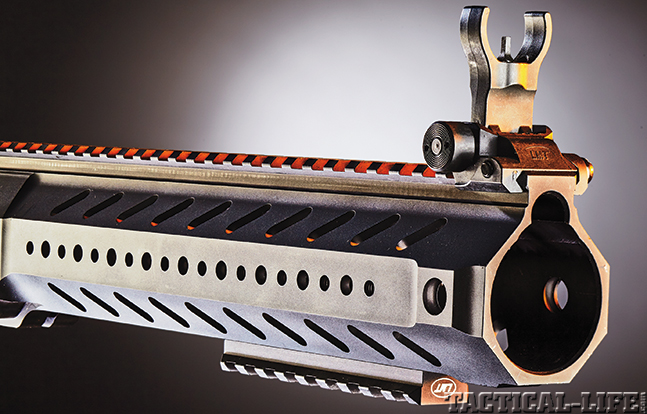 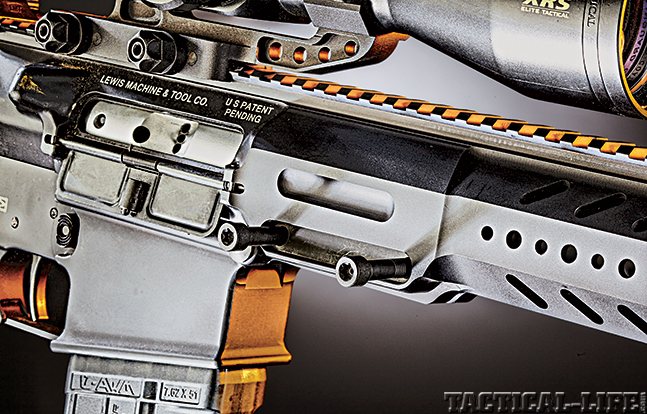 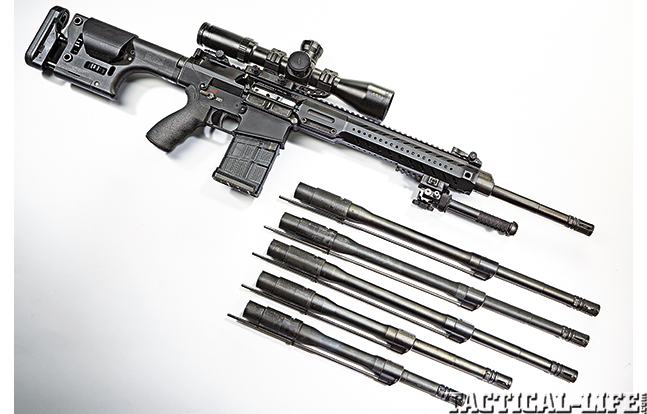 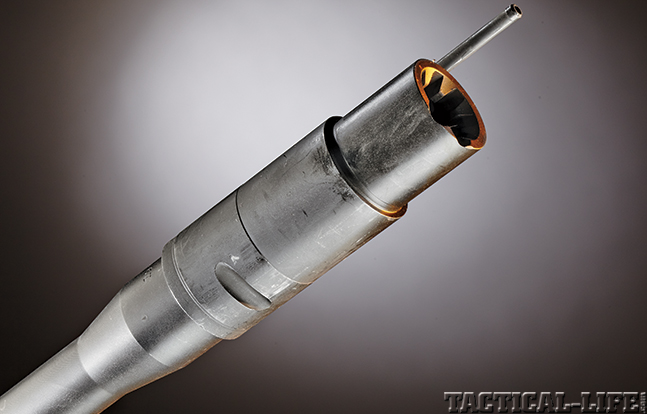 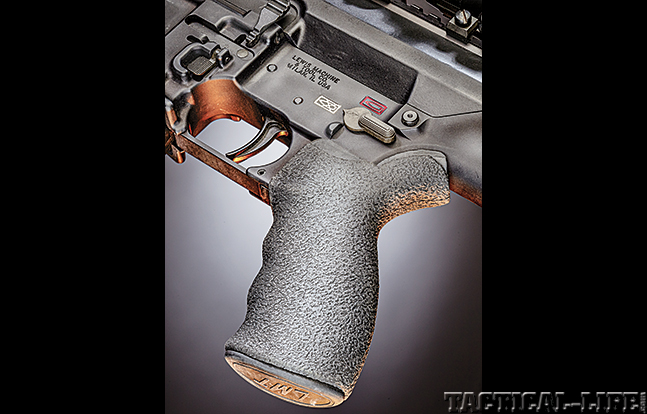 7 of 7
Lewis Machine & Tool’s LM8MWS Features Unmatched Versatility
The lower receiver features an ergonomic pistol grip that is comfortable and makes it easier for you to stay in control and on target, no matter what caliber is used. 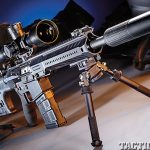 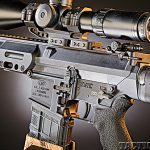 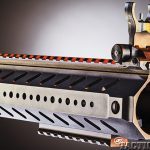 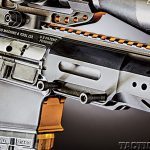 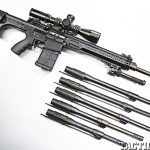 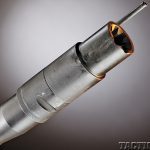 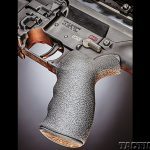 Lewis Machine & Tool (LMT) builds some of the highest-quality rifles you can buy. The company popularized interchangeable-barrel platforms with its MRP series, and has led the pack in monolithic upper receiver designs. One of the first 6.8 SPC rifles I fielded was an MRP upper mated to a Colt M16A2 lower. Along with the 6.8 SPC barrel, I also used an 11-inch 5.56mm barrel with a suppressor for entry duties. For patrol training, I installed a 16-inch barrel to match my officers’ rifles. Like all LMT rifles, the MRP upper was built to match the current military specifications with hardened parts and proven designs for maximum reliability in harsh conditions. Now LMT has brought this kind of barrel/caliber interchangeability to the .308/7.62mm NATO with its Modular Weapon System, or MWS, platform.

The ability to switch out barrels was born from a need within the special operations community. Units with widely varied missions wanted to simply and reliably change barrel lengths in the field. Most modern rifles geared toward these units have this capability. Sure, you can use multiple upper receivers, but that creates logistics problems. It also means you’ll have to swap out optics or sights. Being able to change just the barrel is huge, and coupled with multi-use sighting systems, it increases a rifle’s versatility. What if you could also change calibers? This would be a huge bonus. I recently got the chance to test LMT’s MWS platform as part of its new LM8MWS rifle, which offers this type of operational flexibility.

The LM8MWS’ upper and lower receivers are forged. Forged receivers are excellent when it comes to strength, consistency and lighter weight. The “slick” monolithic upper is well built and features a long, continuous top rail for sights and optics. The slender handguard looks nice and allows for a comfortable hold. Mounting holes at the 3, 6 and 9 o’clock positions make it easy for operators to add rails and mount lights, lasers and other accessories. My test rifle came with LMT’s new folding sights installed on the top rail. These rock-solid units are easy to deploy with one hand and, when not in use, fold flat. Two bolts at the rear portion of the handguard hold the barrel in place, and this area provides a nice flat spot for unsupported shooting. Several quick-detach (QD) slots are also provided for mounting a sling.

“Early in my precision rifle review days, bolt actions with this level of accuracy were rare, let alone semi-autos—so the LMT is truly impressive.”

To highlight its versatility, I tested the LM8MWS with several barrel assemblies that came with the rifle for testing. The stainless steel, match-grade, 1-in-11.25-inch-twist barrels chambered in 7.62mm NATO were 16, 18 and 20 inches long. I also tested a 16-inch, chrome-lined 7.62mm barrel with a 1-in-10-inch twist rate. Other calibers included the 6.5 Creedmoor, .260 Remington, 7mm-08 and .243 Winchester—all with 20-inch, stainless steel barrels. LMT cryogenically treated each barrel to increase its accuracy, longevity and ease of cleaning. Each barrel assembly also sported a low-profile gas block and gas tube, and the barrels were capped with A2-style flash suppressors. Every barrel featured 5/8×24 threading for the addition of muzzle brakes, suppressors and other muzzle devices. Finally, the upper features a hard-chromed bolt carrier group.

The LM308MWS Defender lower receiver includes an ambidextrous safety selector and magazine release. The two-stage trigger group is crisp and clean, while the Ergo rubber grip provides a firm and comfortable hold. Adjustable SOPMOD stocks come standard with the LM8MWS, but my test rifle came outfitted with LMT’s new DMR stock, which is adjustable for cheek height and length of pull. The remaining internals are mil-spec.

Having one rifle that can be used for patrol, competition and precision work is intriguing. My caliber of choice for competing is the 6.5 Creedmoor, and I’ve spent some time using the .260 Remington. For duty use and training, it is just hard to beat the 7.62mm NATO. So, I used all three to test the LM8MWS’ capabilities.

For testing, I mounted a Bushnell Elite Tactical 4.5-30x50mm XRS scope in an Alamo Four Star single-piece mount, which provides proper eye relief and has proven to return to zero consistently. Bushnell’s Elite Tactical scopes are well built with high-quality glass and excellent reticles. The XRS’ Horus H-59 reticle is perfect for training, competition or duty, and the scope’s turrets lock into place and are large with easy-to-read measurements. The scope can be adjusted in 0.1-mil increments to match the reticle, eliminating math conversions.

“If you want a truly versatile AR with sub-MOA precision, complete reliability and incredible versatility, the LM8MWS should be one of the first on your list.”

Accuracy testing began with the 6.5 Creedmoor and Hornady’s 140-grain A-MAX match ammunition. This load has produced some impressive groups, and the LMT was no exception. My best five-shot group at 100 yards measured 0.5 inches. Recoil was minimal—the carbine barely moved. This prompted me to test the LM8MWS with just its iron sights. LMT’s new sights lend themselves to consistency, as proven by a 0.95-inch group with this ammunition at 100 yards. Granted, this kind of shooting takes some practice, but it shows the inherent accuracy of the rifle.

Next I switched to the .260 Remington. While hunting ammunition in this caliber is prevalent, factory match-grade ammunition is hard to come by. Most handload their own for competitions, and I used a load I had cooked up for a custom build with 140-grain Berger bullets in the LM8MWS. In the custom build, 0.25-inch groups were the norm, with several closer to 0.2 inches. The LMT came very close, with the best group measuring 0.27 inches. This can be an incredibly accurate caliber with some real reach, and it’s one of the most popular calibers for serious precision rifle competitors.

Since the 7.62mm is the bread and butter of this platform, I tested the LM8MWS with several loads. All of the loads I tested were accurate, with the M118 LR ammo creating the smallest group, which measured 0.52 inches. Everything else was tighter than 1.5 inches, with most hovering around the 1-inch mark. As I am old enough to remember when ARs in this caliber were lucky to create groups tighter than 3 inches, the accuracy of these modern rifles continues to amaze me. Early in my precision rifle review days, bolt actions with this level of accuracy were rare, let alone semi-autos—so the LMT is truly impressive.

Moving back to the iron sights, I tested the LM8MWS from various shooting positions, around obstacles and with various types of ammunition. These sights are excellent. They appear to be a combination of my favorite CQB sight (the HK style) up front and a proven long-range unit for the rear. This setup facilitates really fast shots up close—just line up the circles and press the trigger. The rear sight is adjustable for windage. Designed for a 300-yard zero, the rear sight has large white markings to help with bullet drop. Once I worked out the wind, hits at 500 yards were pretty regular. As backup sights go, these are excellent, and they could easily be used as a standalone sighting system.

Once zeroed at 100 yards, there were minimal point-of-impact shifts when switching between calibers, allowing you to use just one scope. You will just need to document the changes where precision was needed. Being able to use one sighting system is one of the advantages of this design, and it worked well.

Swapping out barrels is simple, fast and requires only one tool, the proper torque wrench, which LMT provides. During testing I loosened the screws holding the barrel in place as much as a turn with no change in the point of impact. Just check them under hard use on occasion. Removing and replacing a barrel generally yields little to no change, especially if you torque the bolts properly.

The LM8MWS’ reliability was excellent with every barrel, and ejection patterns were impressive. From prone, with consistent pressure in the pocket, the rifle created a tidy pile in the same place with all of the ammunition. The ejection pattern was a bit less regular in rapid fire, but the rifle was completely reliable.

The trigger is crisp, but it’s not a 2-pound target trigger. The second stage is longer and weighs around 5 pounds, which I consider perfect for most duty applications. The trigger reset is tactile and audible, making repeat shots fast. The ambidextrous safety was well placed and easily accessed with either my thumb or the trigger finger, allowing for the use of most modern grip methods.

All in all, the LM8MWS is an impressive rifle. If you want a truly versatile AR with sub-MOA precision, complete reliability and incredible versatility, the LM8MWS should be one of the first on your list. 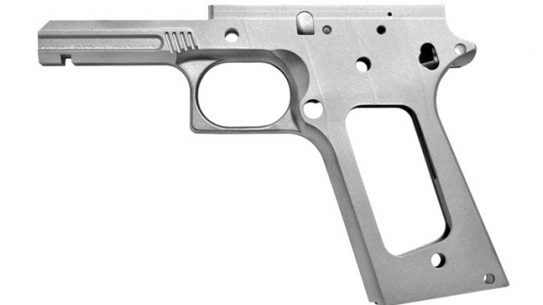 The all new 80% TM Recon Frame from Tactical Machining is CNC machined from...