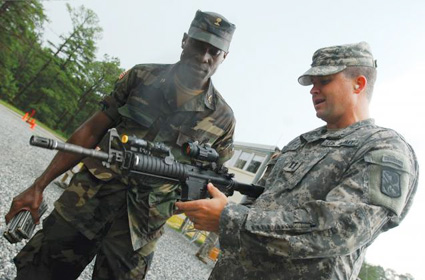 FORT BENNING, Ga. — A Liberian military defense delegation has come away from a visit to Fort Benning saying they’ve gained insight into military training that could be used to help stabilize the country and rebuild the Armed Forces of Liberia, currently being restructured after a decade and a half of war.

The three-member delegation led by Liberian Maj. Andrew Wleh, commander of the AFL Training Command, wrapped up a three-day stop at Fort Benning, Friday after touring several sites and meeting with key leaders.

The visit, part of a week-long tour of U.S. military training installations at Fort Benning and Fort Jackson, S.C., was aimed at furthering Liberia’s efforts to build an army capable of sustaining security in the country as the United Nations Mission in Liberia draws down its forces, said Col. A. L. Rumphrey, chief of the Office of Security Cooperation, U.S. African Command, at the U.S. Embassy in Monrovia, Liberia.

The U.S. government has been heavily involved in Liberia’s efforts to grow a quality army, said Rumphrey, who is responsible for helping to rebuild the AFL.

Rumphrey escorted the delegation during their visit to the U.S. July 26 – Aug. 2.

Last year, the AFL began basic and advanced training courses modeled after the principles of the U.S. military, he said.

“Approximately 200 contracted personnel, along with active-duty U.S. Marines and Soldiers are on the ground in Liberia working with (AFL soldiers) every single day and training them,” Rumphrey said.

“We wanted them to see the way we’ve implemented training in their country is similar to the way we do it here,” Rumphrey said.

Last year, Liberia’s Ministry of National Defense set a goal of having 2,000 trained soldiers by 2010.

The AFL exceeded that goal in June by nearly 200 soldiers, Rumphrey said.

But the nearly 2,200-strong army now faces many challenges in its path to redeeming itself and gaining the trust of the countrymen, Wleh said.

“One of the obligations we have is to erase the old, negative image of our army,” Wleh said. “And let the Liberian people know that yes, we now have a military that people can depend on, be proud of, and that is prepared to protect their lives and property.”

The war in Liberia was initially a political fight for power that expanded to a 14-year battle between various groups, but was marked by corruption and excesses on the part of the army against the very people it was expected to defend, he said.

“This country was ravaged for nearly fifteen years by the military themselves,” said Rumphrey. “When we brought the military back, we got rid of every single (soldier) and now we are trying to build a confidant military that the public has faith in.”

Wleh said as Liberia continues along the path toward national reconciliation, development and reconstruction, rebuilding the AFL and restoring the public’s trust is critical to the country’s efforts at democracy.

“I for one know, being a citizen, that the standing up of a professional military is necessary for our national stability,” he said. “There are those … that given the chance, would do anything to get power.

“But if they see that we have a standing, regionally-balanced military on the ground, a military not willing to compromise, that will defend its oath to protect lives and property, it will serve as a deterrent. They will be forced to comply with democratic norms instead of aspiring to power.” 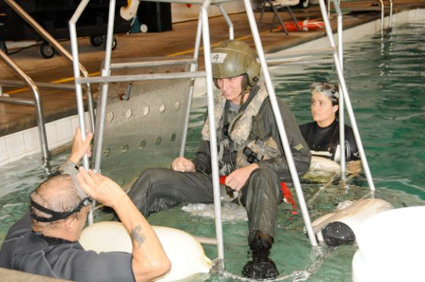 FORT BENNING, Ga. -- A Liberian military defense delegation has come away from a…