The modern security holster—a duty holster in which the gun is “secured” in the holster with one or more devices with user-activated release mechanisms—has been one of the great law-enforcement success stories in the last couple of decades. They were developed as a result of statistics showing that a startling number of police officers were shot each year with their own guns.

This may seem strange to those outside the profession, but remember that there’s at least one gun present in every officer-subject interaction, and that’s the officer’s! Uniformed police carry their handguns in plain sight, and criminals routinely try and grab a cop’s gun from its holster. There are many, many incidents in which a security holster has saved an officer’s life. In fact, much of the military uses security holsters for sidearms today, since the urban, close-quarter combat that we are engaged in now puts soldiers in close proximity to people of unknown intent.

Security Levels
Every major duty holster manufacturer makes security holsters, and it’s a rare cop who doesn’t use one today. Holsters come in different “security levels,” usually from 1 to 3, and sometimes 3+. Each manufacturer has a different method of attributing “security levels” to their holsters—there is no universally accepted industry standard.

The original Safariland standard developed by Bill Rogers, the original designer of the security holster, is a functional test. By contrast, many manufacturers simply equate a security level with the number of retention devices on the holster, usually including a simple tension screw as a security level. By my own definition, a security level is achieved by an independent, non-drawstroke movement that the user must make to get the pistol into a state whereby it can be withdrawn straight out of the holster. Thus, by my definition, a speed scabbard (an open-top) holster is a Level 0 holster. A simple thumb-break holster is a Level 1, and any other independent movements necessary to draw the gun straight out of the holster add a security level each. But nothing’s perfect; in the table you’ll see one “Level 0” holster (by my definition) that is actually extremely secure!

Making The Best Trade-off
While most police officers today use at least a Level 2 holster, there’s nothing wrong with a lower security level on a holster. There’s an inherent trade-off between security and draw speed. Some officers, and many trainers, still prefer the speed and intuitive operation of a Level 1 thumb-break holster over the security and complexity provided by Level 3 and Level 4 holsters. Heck, Bill Jordan spent most of his time on the Border Patrol with his Jordan-style duty holster in Level 0 mode! 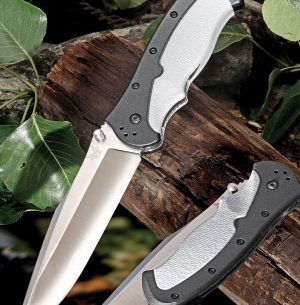 The Benchmade/Steigerwalt LFK knife is a true blast from the past with major survivalist-friendly...