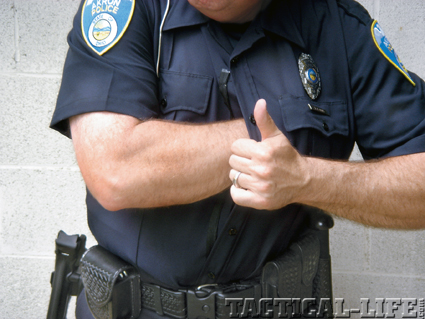 Having lost his duty sidearm, this streetwise cop resorts to his vest holster and produces a “baby” Glock. When it comes to backup guns, you’d rather have it and not need it than need it and not have it. Image: Kevin Davis.

Saved Officers
It is axiomatic that drawing a second gun is often “the fastest reload” in a gunfight. I recently read of what I’ll call here Case One in the excellent book Deadly Force: Firearms and American Law Enforcement by Chris McNab (Osprey Publishing, 2009). Quoting from the FBI’s Law Enforcement Officers Killed and Assaulted, McNab offers, “On Monday, April 8, 1996, two New York City police officers were conducting an undercover ‘buy and bust’ drug operation in the Bronx,” when one suspect drew a pistol and forced them into a gunfight. The quote continues, “The gunman, standing 25 feet away, turned toward the officers and began firing his 9mm semi-automatic pistol at them. Both officers returned fire. During the course of the gun battle, the officers exhausted their ammunition supply. The perpetrator, with his gun in hand, then began to advance toward the officers. With no bullets remaining in their pistols, one officer retrieved his off-duty revolver and fired one shot at the advancing gunman, causing him to stagger and collapse to the ground, where he succumbed to his wounds.” 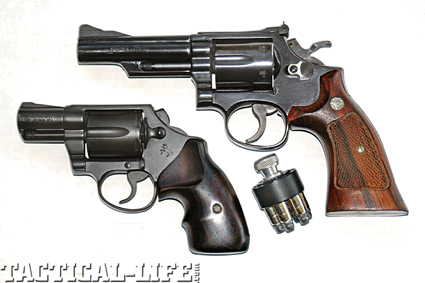 NYPD has a long and street-validated tradition of sworn personnel carrying their smaller off-duty gun with them at work as a backup. In Case One, it clearly saved the lives of two police officers.
Case Two, a bit over a year ago as I write this, a conservation officer of the Florida Fish & Wildlife Conservation Commission had a suspect pull a 1911 .45 on him. The officer quickly reacted and went for his own .45, a Glock 21 equipped with attached flashlight, but “action beat reaction.” A 230-grain full metal jacketed round struck the officer in his gun hand as he was beginning to draw, disabling the hand and also damaging the holstered pistol. The lawman turned and ran for cover as the fusillade continued. One bullet struck him in the arm on the opposite side, shattering the humerus and now leaving both his upper limbs severely impaired. More .45 slugs hammered into him, some stopped by his body armor and another deflected by his Leatherman tool and the duty belt it was carried on. 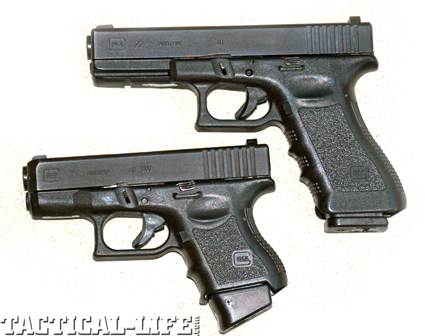 One of today’s most popular combos is Glock 22 (top) w/Glock 27 for backup; both can feed from G22 mags. Deputy in Case Three might have benefited from such backup.

Having lost his duty sidearm, this streetwise cop resorts to his vest holster and…