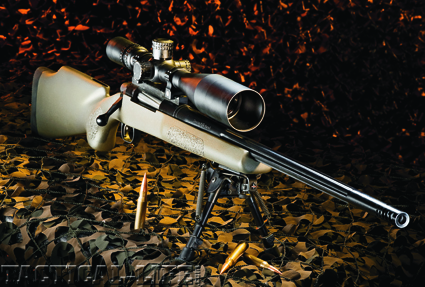 The Defender slims down CheyTac’s .408 platform to 14.5 pounds, but deftly handles the big bore, 419-grain bullet. The Defender’s fluted barrel is bedded in a Manner MCS-3 stock and topped off with a NightForce NSX 5.5-22x56mm scope mounted to a 40 MOA NightForce scope rail.

A media darling and world-record shot group holder at 2,300 yards, CheyTac’s M-200 Intervention became a name synonymous with long-range accuracy and technical innovation. But with capabilities come tradeoffs in weight, length and portability. Building on success and end-user feedback, the company has employed further technological developments to produce the Defender, a shorter and significantly lighter bolt-action rifle also chambered for the mighty .408 CheyTac cartridge.

CheyTac’s engineers did not deviate from the bullet around which their first system was designed, the CheyTac .408. At 419 grains with a G1 ballistic coefficient of 0.949 and an initial muzzle velocity of 2,890 fps, the patent-pending round stays supersonic up to 2,200 meters, 400 meters beyond the best .50 BMG rounds. The bullets are a copper/nickel alloy, CNC lathe turned and manufactured by Jamison International of South Dakota. CheyTac owns a majority interest in Jamison International and can fill any ammunition order that operators require. In addition to the 419-grain projectile, CheyTac also produces a 305-grain BDR (battlefield domination round) that fires at 3,450 fps and is designed to operate as a flat, fast round within 1,000 yards. CheyTac and the 419-grain bullet’s designer, Lost River Ballistics (Warren S. Jensen), refer to the .408 as the first “balanced flight projectile.” Translated, this means the linear drag is balanced with the rotational drag thus keeping the bullet pointed directly into the oncoming air. This factor is most valuable in producing stability during transonic flight (when the surface area of the bullet is above, at and below supersonic speeds) resulting in a truer, more predictable flight path at distances in excess of 2,300 meters.

Lean, Mean Defender
So how does CheyTac harness a round of this size and power into a lighter, more man-portable version than the 29-pound original? They start by reducing the barrel length by 5 inches (to 24” from 29”), giving the rifle an immediate weight reduction of 4.6 pounds. The fluted barrel and action are mounted into a CNC-inletted Manner MCS-T3 stock made from kevlar and carbon fiber and fitted with a Pachmayr Decel pad. The comb is also custom slotted to accommodate the increased travel length of the bolt. The Defender’s muzzlebrake is an internal design perfected by CheyTac’s Dave Durham and the late Barney Lawton. It is a product of several years of testing to optimize both the number and size of vent ports resulting in an even and consistent bleed-off of muzzle gasses. For the Defender’s optics, CheyTac chooses the NightForce NSX 5.5-22Xx56mm scope with a 40MOA NightForce rail mount. This combination gives 150 MOA of vertical adjustment translating into between 2,250-2,300 yards of optical elevation adjustment before a holdover is necessary. The triggers come in either a Schilen or Jewell system set at 2.5 pounds. Rounding out the package is a Harris bipod that brings the empty weight to 14.5 pounds making the rifle much more portable than its big brother. 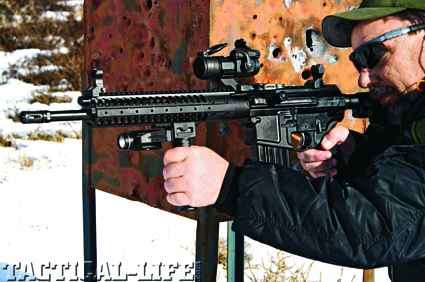 The Defender slims down CheyTac’s .408 platform to 14.5 pounds, but deftly handles the…