I’ve said before that we’re in a golden era of striker fired 9mm pistols. However, that doesn’t mean that the time of the double action/single action, aka DA/SA semi-auto is over. There are still plenty of great options using this tried and true action system. One of the lesser known players in that game is the Lionheart Regulus. It shouldn’t be lesser known, and we’re going to try and rectify a bit of that. 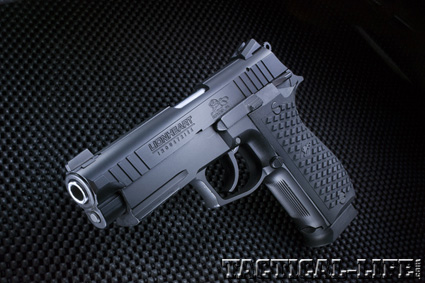 The Lionheart Regulus has an Interesting Backstory

If you look at the Lionheart Regulus Alpha, it kind of looks like a 3rd Generation S&W semi-auto, right? It has similar lines. If you put the Regulus next to say, a S&W 4006 TSW and squinted hard, they’re definitely related.

That’s because they are related, at least sort of. The Regulus is descended from the Daewoo K5. The K5 was called the DP51 during its brief importation to the States. K5 is its designation in the Republic of Korea’s armed forces, where it’s still the standard service pistol for officers. The original K5 designed borrowed notes from the S&W 5906. In fact, the pistols share the same magazine, so if you do get a Lionheart pistol, you can source spare 3rd Gen Smith magazines for it. The current Lionheart comes with a two 18-round magazines. 10-rounders are available if you don’t live in America.

The Daewoo Comes Back to America

Lionheart originally imported pistols directly from Daewoo in South Korea. These were called the LH9, and I had one and liked it. Eventually, after going through a few iterations with the guns, they started to manufacture the pistols in house, starting with the Regulus. Now, the Lionheart Regulus is their flagship gun, made in America. Luckily, it preserves the best feature of the original K5: the trigger.

As mentioned above, the Regulus is a traditional DA/SA auto. The first trigger pull is long and heavy. It both cocks the hammer and releases the sear. Then the gun cycles, and the slide cocks the hammer for all subsequent shots.

The Lionheart’s party trick is its third mode for the trigger, called Double Action +. Think of DA+ like combining all the best features of the HK LEM trigger with a decocker. On a Beretta, for example, after you load the gun, to lower the hammer you have to hit the decocking lever. Same on a Sig P226, for example. The Lionheart Regulus works a little different.

To decock the Lionheart, you just push the hammer forward. It snaps back into the slide, and the gun is both decocked AND in DA+ mode. In fact, because the Regulus lacks a decocker, this is the safest way to lower the hammer on a live round. Double Action + yields a 6 pound trigger pull. In “true” DA it’s 12, and the single action trigger is a crisp 4 pounds.

The pistol does have a manual safety as well. You could theoretically carry it cocked and locked like a 1911. But because the DA+ trigger is so good, there’s no point. If I was adopting this as a duty or EDC gun, I’d carry it similar to how the USAF carried their Beretta M9s. Safety off, but instead of decocked like an M9, the Regulus would live in Double Action + mode.

How Accurate is the Lionheart Regulus?

It’s pretty accurate. Both the header image and the one above were fired at 25 yards standing unsupported. That tests both a gun’s practical accuracy as well as how easy it is for a shooter to wring that accuracy out of the gun. The smallest group was around 2 inches, with most staying around 4 inch mark. Again, that’s standing, not off a rest or a bag. Off a bag this is easily a 2 inch group gun.

The Lionheart Regulus is also nice to shoot. The sights are excellent, with a bright fiber optic front and a blacked out rear sight. Also, the sights use Novak’s 1911 dovetail, so if you don’t like them, replacements are easy to source. Shooting fast, accurate Bill Drills under 2 seconds was no issue. The 18 round magazines eject easily, there’s a nice bevel on the magazine well for faster reloads, and all the controls are easy to reach.

In short, as a gun, I like everything about the Lionheart Regulus. I especially like that it has a rail, because that eliminates one of the biggest criticisms of earlier LH guns. Specifically, that it’s hard to find holsters for them. That’s not the case anymore, because thanks to the rail you can drop a Streamlight TRL-1 on this gun and then put it a Phlster Floodlight. Holster problem solved.

Competitors for the Lionheart Regulus

In the form that I got it, the Lionheart Regulus Alpha has an MSRP of $999. Adding different sights and a threaded barrel ups the price to over a grand. However, I’d skip those and go with the Regulus in this exact configuration for $999.

But what else could you get for a grand that’s in this competitive set? I went to Grabagun and sorted for in-stock 9mm pistols with a price around $1,000. If you want to stick to the DA/SA style, the Sig P226 in a couple of different models is an option. However, the P226 is much larger, and without an action job the DA trigger is pretty awful.

However, to my mind the biggest competitor to the Regulus is the Beretta 92X series. Looking online, a Beretta 92X RDO Centurion is running around $700. It has a rail just like the Regulus, but also has an option for an optic mount. A purely iron sight only 92X is going to run under $700. Now, like the P226 the DA trigger is going to be a lot worse than the Lionheart’s Double Action + system. But, a Trigger Job in a Bag from Langdon will go a long way towards making that Beretta’s trigger great.

Ultimately, that puts the Lionheart Regulus in sort of a tough spot. Here’s the thing: objectively it’s a good gun. I really like it. I liked the first one I had too. It’s well made, it’s also made entirely in America, and the company itself is really cool. Plus, I think the gun itself is a really good looking gun. That’s getting rarer these days, but the Regulus looks cool. It also shoots well, it’s compact enough to be an EDC gun, but big enough to be a duty gun. If it was on the USPSA Production gun list it would make a great competition gun.

So what’s the issue? Because it’s a boutique gun, asking users to drop $1000 might be a big ask. I’m not saying it’s not worth the price, because again, it’s a really well made gun that’s made in America. That doesn’t come cheap. But if you, the consumer, had a stack burning a hole in your pocket and could only get one gun for home defense, concealed carry, and training, I don’t know if the Regulus is the best choice.

However, if you’ve got 5 or 6 guns and you want something well made and American that’s nice to shoot, pleasant to hold, and has a really great trigger? Well now take that grand and send it to Lionheart. You won’t be disappointed.