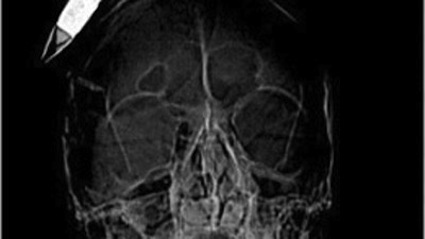 A US Air Force picture of the ammunition lodged in the soldier’s skull.

Radiologist Lt Col Anthony Terreri realised the suspected shrapnel lodged in the patient’s head following a bomb explosion was a 14.5mm unexploded round.

“I saw that it was not solid metal on the inside,” he said.

“I then looked at the scout image and could see there was an air gap on one end and what looked almost like the
tip of a tube of lipstick at the end and decided this didn’t look quite right.”

The operating room and surrounding hallways of Bagram Air Field were also evacuated.

After the round was successfully removed, it was taken away by bomb disposal experts.

Major Bini said that in the past 50 years of modern warfare, there have been fewer than 50 cases of this type.

“This is something that I train and teach,” he said. “It is, however, an extremely rare event. This is what we train to do. It is no different than what we do every day. It was something that needed to be done and the team did their job.”

The patient, who is in his 20s and has not been named, has a traumatic brain injury, but doctors said his condition was gradually improving.

A US Air Force picture of the ammunition lodged in the soldier's skull. Radiologist…