In 1980, Karl Lewis set up a gun company with a straightforward goal. His goal was to fabricate high-quality weapons and component systems for military, law enforcement and government use. After nearly 30 years in business, LMT (Lewis Machine & Tool), located in IL, just a few miles from the Mississippi River, clearly has met its founder’s expectations.

LMT is a U.S. General Services Administration qualified vendor, manufacturing a full line of small arms for military, law enforcement, and recently, civilian use. It produces and markets Defender semi-auto and Guardian full-auto rifles with a variety of hand guards, stocks and barrels, as well as proprietary and standard upper receiver assemblies, lower receivers, M203 Grenade Launcher systems, and a wide variety of accessories. Because the company offers so many options, quoting a typical retail price is difficult, but LMT weapons are competitive in the high-end black rifle market.

The company’s high quality workmanship and level of quality assurance, which includes minute magnetic particle inspections of high-stress working parts such as bolts and barrels, has generated significant recognition and honors in engineering and production over the years from the U.S. Army’s Armament, Munitions and Chemical Command, the U.S. Army Materiel Command, and the Committee of Small Arms Producers. In short, LMT shows that a small company can indeed make a big bang in the global weapons market.

Innovative Rifle Design
Serious manufacturers of AR-15/M16 designs have sought unique approaches and features to set their products apart from merely cloned weapons. In the last few years, LMT has incorporated several functional improvements in its weapons that enable the company rightly to claim that its products are superior.

Probably the most important LMT production innovation is its MRP (Monolithic Rail Platform). Introduced in the spring of 2004, the MRP is a one-piece upper receiver with an integral floating hand guard and rail, all milled from a single aluminum forging. Anyone familiar with structures understands the advantages of one-piece fabrication. As long as the device is properly engineered for its intended purpose, as the MRP definitely is, it eliminates parts and fasteners, reducing the possibility fatigue failure, fit variation or dissimilar metal corrosion. Among other benefits, the system permits free-floating barrels that increases barrel life, deflects heat that can affect the operation of optics and other attachments, as well as user comfort, and inherent stiffness maintains iron sight accuracy even during rough handling.

LMT’s MRP replaces 13 parts in the traditional AR-15/M16 design, a welcome reduction for both shooters and armorers that leans out field stripping, cleaning and maintenance. The hand guard contains four Mil-Std 1913 Picatinny rails, and the top rail runs the length of the part to hold iron sights or a variety of standard, infrared, thermal or laser imaging devices for special operations applications. Rail fabrication is meticulous, involving about five hours of continuous CNC machining. MRPs are available in two lengths, the CQB carbine version with 16.5 inches of continuous top rail and the Standard long rifle version, 4 inches longer. Both versions accommodate virtually all standard or improved component systems. The guard also contains five quick-mount points for sling hardware, with three at 3, 6 and 9 o’clock positions on the rail’s front. Structures weigh in at about 4 or 5 pounds, depending on the model selected.

Wide Caliber Selection
Another clear MRP advantage is its companion free-floating barrel. Chrome-lined barrels come in 10.5-, 14.5- or 16-inch lengths, all with 1:7-inch twist, and 16- or 18-inch stainless steel versions also are available as upgrade options. Calibers include 5.56 NATO, 6.8 Remington SPC (Special Purpose Cartridge) and .204 Ruger. Barrels feature an integrated gas block, tube and headspace collar that supports the gas tube and an indexing slot for one of two screws that hold the barrel securely in place. Barrel changes are quick and easy. A few turns with a torx-head wrench loosens the securing screws fitted in front of the ejection port, and out comes the barrel. The MRP remains tight throughout, and sights or other mounted components require no adjustment after the removal and installation process.

LMT’s caliber selection reflects the current focus of NATO military forces for a more powerful short-range bullet with good stopping power over distances most troops are likely to encounter in fire fights. The 6.8 meets these requirements well, although it does not match the long-range ability of the standard 7.62 NATO round. The .204 Ruger is an extreme high-velocity round, well suited to varmint shooting, with a longer point blank range than .17 HMR.

New Gas Piston System
The MRP definitely sets LMT apart from much of the competition, but in 2008 the company added other important discriminators to its products. The company unveiled a new gas piston system alternative to the standard gas impingement operating system found in most M16s and M4s. Gas piston operating systems are increasingly popular in the black rifle community for several important reasons. In heavy firing scenarios, they keep weapons cooler and far cleaner by venting discharged gases away from the receiver. Piston systems also reduce muzzle creep, making recoil more manageable and contributing to improved accuracy. In general, this approach has reduced the AR design’s reputation for finicky performance during extended field use that requires frequent and thorough cleaning and lubricating to ensure reliability.

LMT’s piston system incorporates a proprietary lubrication system that keeps everything operating smoothly, and assembly and disassembly are quick and easy, enabling operators to change from CQB carbines to long rifle barrels in less than two minutes, keeping the weapon cleaner, more accurate and fully serviceable in quickly changing conditions.
Also in 2008, LMT earned ISO 9001:2000 certification for meeting the NQA (National Quality Assurance) USA’s stringent production quality standards, awarded only to world-class manufacturers. The ISO designation places LMT among the nation’s best fabricators of firearms and reflects well not only on its factory operations but also on the company’s process management that infuses quality into every step employees take in design and production of weapons, accessories and tools.

Testing For Quality
A recent test firing of an LMT weapon confirmed that the company truly meets exceptional production standards. The writer fired an LMT CQB model with a 16-inch barrel and a SOPMOD stock. This composite design, an LMT exclusive, fits over the Mil-Std extension tube and contains heavy buffers and a padded buttplate to soften recoil from large calibers or rifle grenades. A release mechanism under the cheek piece permits adjustment to six lengths, from 33 inches with the stock completely collapsed to 36.25 inches fully extended. The stock was very functional and comfortable throughout a test firing, and a quick adjustment enabled my favorite shooting companion to handle the rifle with ease.

The test rifle came with a Tactical Adjustable Rear Sight, utilizing a flip-up ghost ring, and a standard front post. I fired at 100 yards using the iron sights at my local range and produced respectable groups of no more than three inches, using Remington Premier 62-grain Core Lokt Ultra Bonded cartridges, during informal bench firing with a Mark I Mod 0 human eyeball.

Spares, Systems, Service
Rifle components and parts constitute much of LMT’s business, a natural outcome of its GSA vendor status, since military and other government users must constantly replenish spares inventories. The company has, however, begun offering three complete weapon systems for the civilian market. The CQB tested is LMT’s top of its commercial line, which also includes the Standard and the Standard Patrol. All three models feature 16-inch chrome-lined barrels, standard semi-auto bolt carrier and trigger groups and Defender lower receivers. Buttstock options include the SOPMOD and the SOPMOD Gen 2. Both the Standard and Standard Patrol contain flat top rails on their upper receivers and M4 style hand guards. All weapons measure at just over 36 inches with SOPMOD stock fully extended, although the Gen 2 model reduces length overall by about 1/2 inch. Weights vary from about 6 pounds for the Standard and Standard Patrol to nearly 7 for the CQB.

Any of these rifles are a sure bet for any shooter, but gun owners who already have an AR in the gun cabinet can upgrade with an MRP long rifle upper receiver assembly, available from LMT for $1,289 suggested retail. Free-floating barrels are about $350, and bolt carrier group assemblies are less than $300.

LMT likes to bill itself as “The Quiet Gun Maker,” an image consistent with a small Mid-Western manufacturing company that has built a solid reputation by fabricating equally solid products, in this case weapons, for a demanding clientele, in this case military, law enforcement and serious civilian customers. Clearly, the company’s quality performance is anything but quiet. As noted, LMT has already made a big bang in its industry and is poised to make even more noise in what promised to be a strong future.

For more information on LMT products and services visit lewismachine.net. 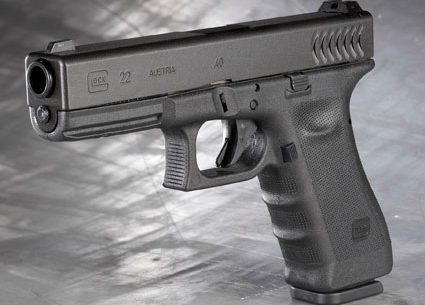 In 1980, Karl Lewis set up a gun company with a straightforward goal. His…