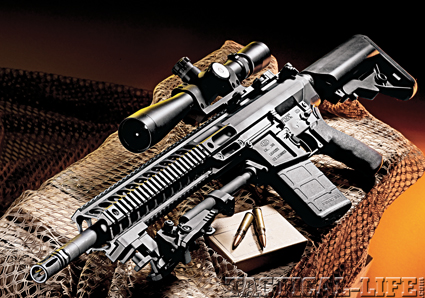 Having been recently adopted by the British Army, the LMT Modular Weapon System in 7.62x51mm NATO is a superbly crafted rifle designed specifically for the mission of the SDM, capable of rapidly engaging multiple targets at close to medium range. Shown equipped with a Leupold Mark 4 LR/T 3.5-10x scope and GG&G Extreme Duty Swivel Bipod.

When I was a young U.S. Marine, the most influential conflict of the time was the Vietnam war. Though I entered the service more than a decade after the conflict ended, most of the senior enlisted and officers at the time were Vietnam vets and took their lessons from that war. In the sniper realm, legends from Vietnam focused on stealthy, almost mythic Marine Corps Snipers. These men could maneuver undetected though enemy territory, take out their target with a single bullet and egress back to friendly lines.

The end-all be-all of sniper rifles when I was a bright-eyed young Devil Dog was the M40, built on the Remington 700 action. A skilled sniper was expected to remain invisible until pressing off that perfect killing shot. Volume of fire or the ability to rapidly reload was not as much a concern as precision and reliability.

Today the ranks of the military sniper are still filled with long-range death-dealers, however, there are just as many if not more Squad Designated Marksmen. These are Expert Riflemen tasked with using precision rifle fire as security or “overwatch” for their fellow troopers. The SDM may be called upon to engage multiple targets per engagement doing so very rapidly at close to medium ranges.

While many M14 rifles were hastily converted to assist Designated Marksmen in carrying out their mission, there were too few and a good number had been on the shelves since the 1960s. The military brass, taking advice from commanders in the field, put out the call for a “semi-automatic sniper system.” The rest, as they say, is history. 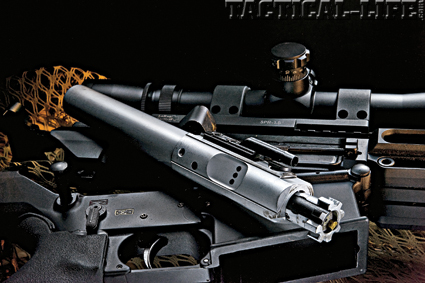 The MWS rifle functions like the classic AR-10, with the massive bolt and bolt carrier at the heart of the gas-operated system.

One of the biggest parameters was that the SASS rifle needed to function in a similar fashion to the U.S. Army’s M4. After all, the Squad Designated Marksmen were being pulled from the ranks to be sent through what amounted to an abbreviated sniper school. They would need to be up to speed and running on any new weapon system rather quickly.

Almost every maker of the “black rifle” submitted their own version of the SASS for review by the Army. Like any contest, there can be only one winner—or is that really true? While the Army’s SASS contract was awarded to a single company, the true winners were shooters worldwide.
The SASS bid request sent firearms manufacturers to their design labs and got the creative juices flowing. Although these companies might not have secured the U.S. Army contract, the gun buying community will benefit from the fruits of their labors for years to come.

Gun Details
Don’t call it a “SASS,” but Lewis Machine & Tool has come up with a rifle that fills the bill for the Squad Designated Marksman — they call it the “Modular Weapon System.” The rifle is built around the 7.62x51mm NATO cartridge (or simply the .308). Of course the great irony of the 7.62mm NATO was that prior to the Global War on Terror it had been essentially shelved as a battle-rifle round replaced almost wholesale by the 5.56x45mm NATO. Today that situation has changed dramatically. 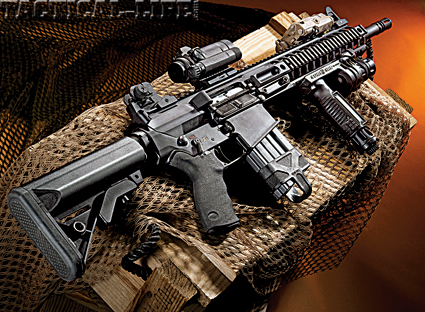 Using a direct gas-impingement operating system, the MWS rifle functions like the classic AR-10. The rifle is fed by a 20-round magazine akin to the classic .308 AR. Beginning on top, the upper receiver includes a 16-inch barrel with a unique 1-in-10-inch rifling twist. The barrel completely free floats inside an aluminum quad-rail system. Three black polymer rail covers are included as is a nylon sling.

A NATO spec muzzle brake is found out front. The upper receiver has a flattop rail and the quad rail runs all the way out to the gas block. Adjustable front and rear sights are included with each rifle.

Special features on the rifle include an ambidextrous manual safety lever as well as an ambidextrous magazine release. The charging handle is a tactical model and the pistol grip is a hand-filling model from Ergo Grip. At the rear LMT has added a SOPMOD retractable rifle stock.

The feature that makes this rifle a “modular” weapon is the easy to install/remove barrel. To remove/change barrels the shooter needs only remove two bolts that are found at the rear base of the handguards. LMT includes a pre-set torque wrench to tighten the bolts back in place at the manufacturer’s recommend tension.

Range Time
Before I received the rifle for review I was actually able to get a sneak preview of sorts when I attended a 3-Day Urban Sniper training course put on by International Tactical Training Seminars (ITTS).

During that event, I put somewhere in the neighborhood of 400 rounds of ammunition through the rifle. By the time I returned home I had a good deal of confidence in the new LMT design.

For my range testing I would run a variety of .308 ammunition through the gun. Loads from Black Hills, CorBon, and Hornady were used with bullet weights from 125 up to 175 grains. I would feed the gun using the included 20-round magazine and a shorter 4-round version from DPMS. 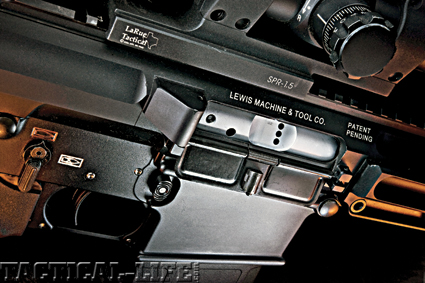 Special features on the rifle include an ambi fire selector as well as an ambi mag release.

Naturally, step number one was to zero an optical sight on the rifle. The iron sights are great as a back-up or redundancy system, but a precision instrument such as this required some quality glass. A Leupold Mark 4 LR/T 3.5-10x scope was quickly attached to the rifle with a LaRue QD LT-104 mount.

Consistent accuracy is the name of the game and the LMT Modular Weapon System was certainly capable of that.You will note that every load was able to produce sub-MOA groups with regularity. Some were better than half-MOA. With the proper dope I was able to bang away at a swinging steel plate at 250 yards with little difficulty. During previously mentioned Sniper Course, all the students used LMT .308 rifles to engage steel targets to 400 yards and beyond. 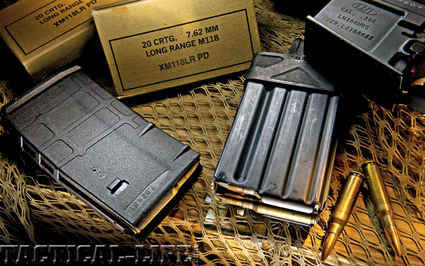 During both the formal training and my time on the range I found that the rifle was totally reliable. That being said, I do have some “druthers” or personal opinions about the set up. The ambidextrous selector lever was not an issue until I started to run rapid fire drills. These occurred during the sniper school. From a standing ready position, we were instructed to raise the rifle and fire two shots center mass as fast as possible. The distance was only 25 yards. During one relay, I pressed the trigger and the gun did not fire. I immediately performed remedial action to get the gun up.

One of the instructors was watching and we determined that when I rolled rifle up to my shoulder, simultaneously flipping the safety lever with my shooting thumb, that the ambidextrous portion of the lever was catching on my gloved hand and not disengaging completely. I felt a bit silly until the instructor told me that the same thing had happened to him when running the rifle.

This might not seem like a big deal until you consider that the rifle may very likely be called upon in a high-stress shooting situation. For my money I can do without an ambidextrous switch on a black rifle.

As for the trigger, LMT advertizes that it is a two-stage version. When slow-firing on paper I found that the weight of the trigger, nearly 5 pounds, was a bit heavy for a precision instrument. However, when I moved on to steel targets, the trigger weight seemed to be less of an issue. It didn’t prevent shots from striking a 12-inch plate at 250 yards.

With the aforementioned items noted, the LMT MWS proved a very accurate and reliable rifle. The quality of workmanship is obvious when handling the gun. At this writing, the British military has adopted this rifle and dubbed it the L129A1. That certainly speaks well for the gun and virtually assures its success for years to come. How will it perform on the battlefield in the hands of Squad Designated Marksmen? Only time will tell, but my money will be on the British Army shooters and their new 7.62mm NATO rifle. 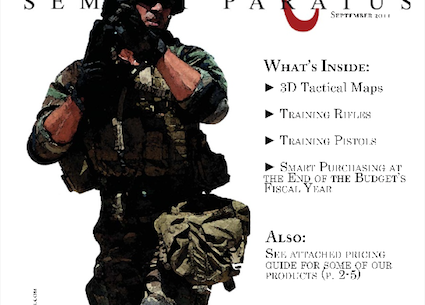 Having been recently adopted by the British Army, the LMT Modular Weapon System in…