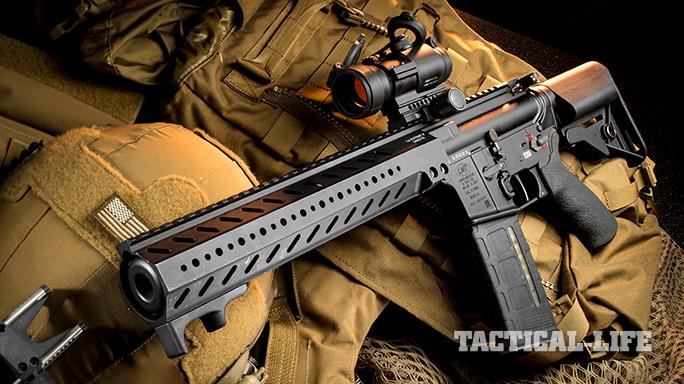 1 of 10
Photo by Sean Utley
LMT CSW
LMT’s new CSW brings 300 Blackout firepower in a package only 24 inches long—all without the resulting muzzle blast and fireball you’d expect from an SBR. It uses an ingenious integrally suppressed barrel. 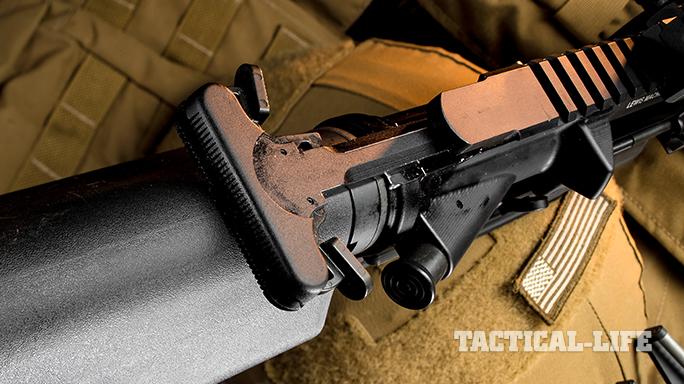 2 of 10
Photo by Sean Utley
LMT CSW
The CSW has several noteworthy features, including an ambidextrous charging handle. 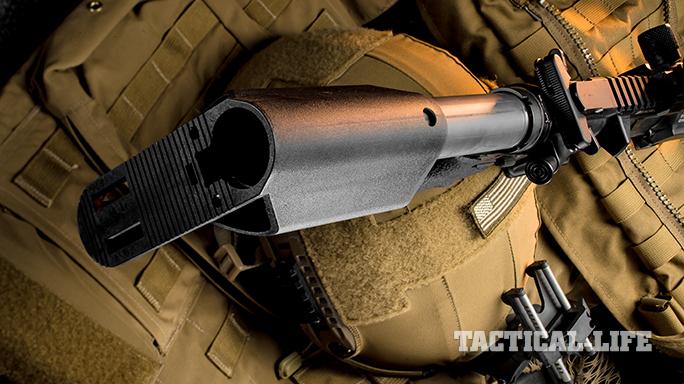 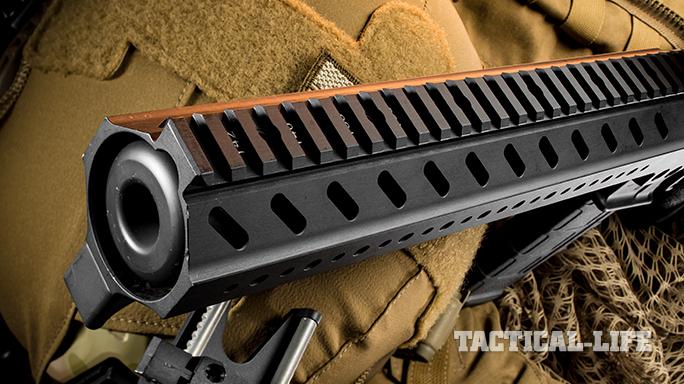 4 of 10
Photo by Sean Utley
LMT CSW
The CSW also sports a slick modular handguard with a hand stop to protect your support hand. 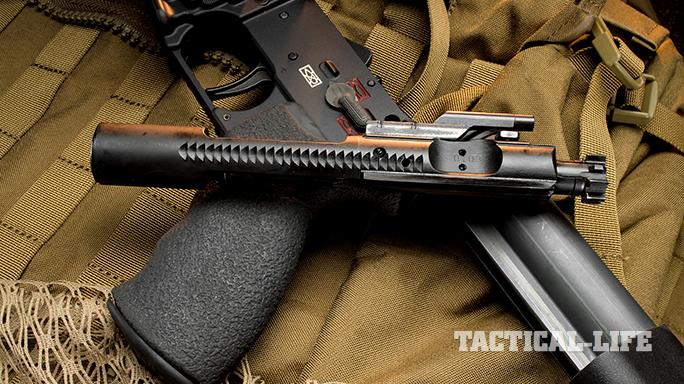 5 of 10
LMT CSW
To get the carbine down to 24 inches, LMT designed a new buffer system that is shorter by 3.25 inches, yet the CSW still uses a standard bolt carrier group. 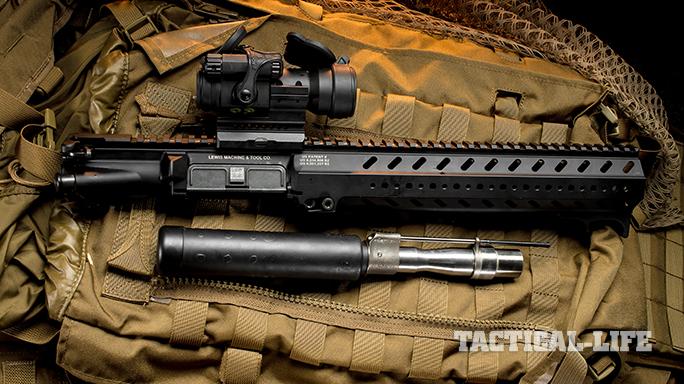 6 of 10
Photo by Sean Utley
LMT CSW
As you can see, the barrel, suppressor and gas system are all one component, and LMT’s Modular Rail Platform upper makes it easy to quickly swap out barrel assemblies. 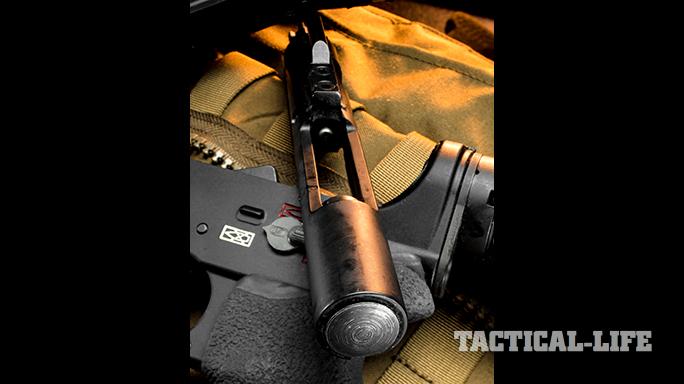 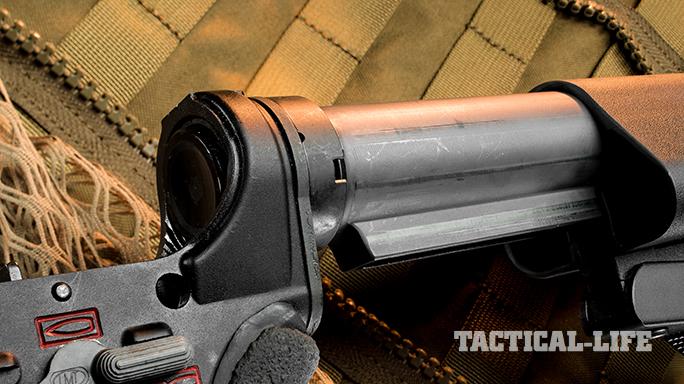 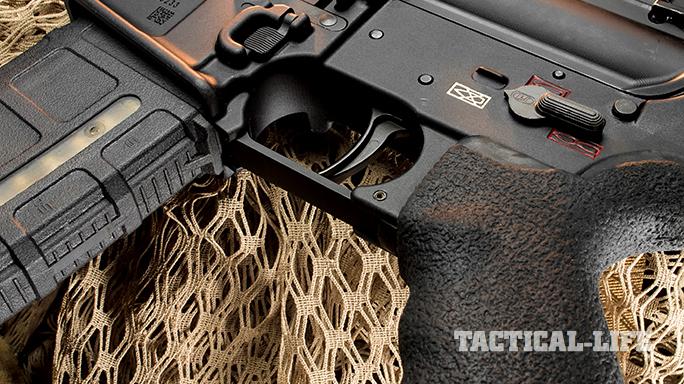 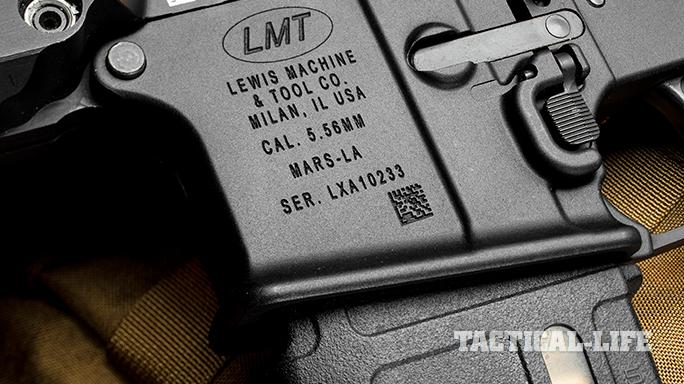 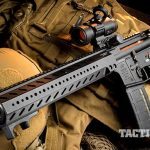 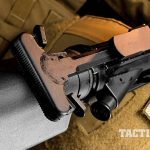 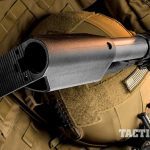 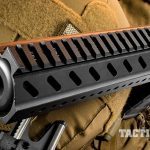 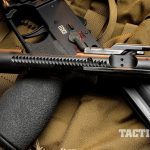 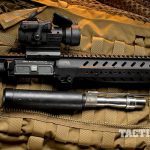 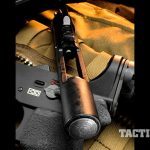 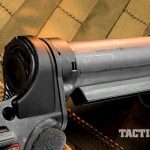 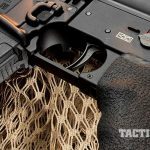 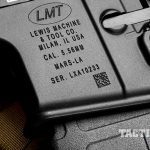 Proposed advancements in the AR platform are unavoidable. But what’s difficult to determine in the myriad of inventions is what is indeed plausible, functional and useful. The modularity of the platform is inherently a bastion for design and invention. Many times, it’s challenging to gauge the impact of a new technology or approach, and it’s often up to a group of champions in the gun world to make this determination. Who this group is can vary, but in the minds of serious tacticians—those who may bet their life on the claimed technology—this role is typically bestowed upon elite military units. If they bless the technology by adopting it, other operators and civilian shooters are likely to embrace the technology as well.

The source of the technology is often just as important as the technology itself. Organizations with an established history of working in the combat arena are far more likely to be influential than those that have only spoken of it. Lewis Machine & Tool (LMT) is one of those companies that designs and fields specialized weapons on a consistent basis. While some companies must rely on marketing hype and flashy visuals to garner attention, LMT does not. Its revolving military customer base knows that LMT can produce useful tools for practical, field-ready applications.

There are trends in the firearms industry. These trends wax and wane with the real-world capabilities of the weapon system itself. Suppressing the AR-15 is one of those trends. While suppression itself isn’t a trend, the packaging in which the suppression comes in is. It’s OK to hang a sound suppressor on the end of a 14.5-inch barrel, but can you make it part of a compact combat system—one that is functional and reliable? This is the current trend, and it’s pushing manufacturers to new limits.

It’s statements like this that give measurable legitimacy to certain manufacturers. We’ve all seen short-barreled weapons designed for maximum concealability, but they come at a price—often in the forms of decreased reliability and increased muzzle blast. LMT sought to address this from the outset. It’s easy to attach a suppressor to a short barrel, shove it under a handguard and call it a day, but LMT didn’t take that approach. Instead, the company developed a complete suppressed system from the ground up.

In fact, the highest priority for the LMT CSW was functionality, and the gas system’s cyclic speed was researched considerably to be sure the carrier was moving appropriately while avoiding bolt bounce. The second priority was developing a suppressed system while keeping a 10.5-inch overall barrel length. LMT worked with suppressor manufacturers for some time but in the end decided to develop its own product. “We worked closely with Lawrence Livermore National Labs, which is run by U.S. Army Armament Research, Development and Research Development Center (ARDEC),” Pruitt explained. “They basically think of impossible things and develop technologies.” Eventually, ARDEC licensed its fluid technologies to LMT to develop suppressor technologies.

The LMT CSW has a 10.5-inch, integrally suppressed barrel. The 1-in-7-inch-twist barrel is actually 8.2 inches long, with the suppressor making up the remainder. The barrel, gas system and suppressor are all part of one assembly. In the case of LMT’s popular Monolithic Rail Platform (MRP), this means you can switch out the suppressed barrel unit for a standard barrel, or a different caliber suppressed barrel, if desired by loosening a bolt. The forend of the LMT CSW is larger—in fact, it’s the size of LMT’s .308 Winchester/7.62mm NATO handguards—to accommodate the suppressor. The handguard’s sides are slick, but rails can be added for accessories where necessary.

The suppressor is made up of different materials for different end-users. The version I tested featured an Inconel blast baffle with an Inconel second and third baffle system. LMT has filed a patent for what it calls the “Virtual Baffle System.” As Pruitt explained, “As the bullet passes through the first baffle, the gas is sheared off of the sides and turned backward into a pathway on the outer edges of the suppressor, but still within the outer tube.” According to Pruitt, this setup allows their system to hold the gases longer, giving them more space to expand and cool than in other suppressor designs. Also, the LMT suppressor moves gases in a way that allows it to stay cooler than competitive suppressor designs while decreasing the amount of noise that comes back to the shooter’s ears. “It’s as hearing safe as you can get inside of a ship’s hull.” Other elements of the LMT design significantly cut down on the gases that are blown back into the shooter’s face as well.

Sound reduction was paramount in the LMT CSW’s design, although no specific decibel reduction was sought after. It was purely about creating the whole system to work properly and fill the needs of the customer in actual scenarios. The suppressor is built to be durable with a true full-auto rating and no limit on the number of rounds fired. And although the prototype suppressor I tested was hand-welded, production models will be laser-welded.

In development of the CSW, the customer had an overall length requirement of 24 inches. This raises a significant challenge in and of itself, not to mention the need for suppression, while trying to maximize barrel length. LMT accomplished the length requirement by developing a new buffer system with a shorter buffer tube but a standard bolt carrier. The total length was reduced by 3.25 inches, all from the rear of the gun.

This new buffer system is adaptable to any AR-platform rifle, which will make it attractive for a whole host of end-users. The user need only remove the castle nut and change out the existing buffer tube for the new LMT version, insert the newly designed buffer into the rear of the existing carrier and replace the spring. A standard buffer has several weights inside of it, whereas the LMT version has only one weight inside and two others that insert and secure into the rear of the carrier, utilizing that hollow, wasted space. This instantly removes over 3 inches from any existing platform.

It goes without saying that everything on the CSW—or any other weapon that LMT makes—is mil-spec, and the CSW utilizes an ambidextrous lower receiver so the user can operate the gun from either side.

One of the most obvious issues with using any sound suppressor under a handguard is heat, and I brought this up to Pruitt. He explained that the LMT CSW is not a battle rifle but instead a specific-use weapon meant to fire a limited amount of rounds in specific scenarios. “It was meant to clear buildings room to room and get out,” Pruitt said. He said that 60 to 90 rounds could be fired before the handguard got too hot. Obviously utilizing a pair of gloves is a good idea when shooting long strings of fire through the CSW, although I fired many rounds without them.

While driving to the range, Pruitt explained how well-mannered the LMT CSW is, setting up high expectations on my end. But the CSW did not disappoint. The prototype functioned exceptionally smoothly. I paid particularly close attention to the gas blowback and noticed the lack of it with the CSW. When shooting left-handed, my eyes didn’t burn and my glasses weren’t splattered. The recoil was extremely light as well, and all things considered, the CSW performed better than I expected. After a few off-hand shots, I flipped the safety to full-auto, and again it ran like a top. After about four magazines, I started the accuracy portion of the test.

I ran the gun with two super- and subsonic loads. Sub-MOA accuracy wasn’t expected, as I’ve never seen a 300 Blackout rifle that performed exceptionally in the accuracy department. Yet I was surprised when the CSW created four-shot groups with the Nosler and Modern Arms International loads that measured 1.3 and 1.4 inches, respectively. Both had flyers that opened the groups up to 2 inches. The Federal American Eagle subsonic loaded created a 1.8-inch group at 100 yards—again a surprising result. Pruitt wasn’t excited about the results, but this prototype had seen some hard use.

Keep in mind that the CSW is meant for extremely close engagements inside confined spaces, not for precise 200-yard shots. The customers interested in the CSW know how the weapon is meant to be used. My 100-yard shots were in the 2-inch range, which is plenty accurate and better than I imagined it would be, especially for a 300 Blackout carbine.

The LMT CSW is being adopted by military and law enforcement personnel alike. A semi-automatic version will be available for the civilian market as well. Due to the short barrel length and the suppressor, it will require two tax stamps unless laws change regarding suppressor ownership. It’s simple enough to do the paperwork for both at the same time; the most difficult part may be putting up the additional $200.

The CSW will make for an effective tool for units that adopt and field it. With the ability to easily change out barrels, the weapon system is truly multi-role capable. For non-military/LE users, this 24-inch weapon is tough be beat for its short length. Add .30-caliber effectiveness and suppression and you have a viable home-defense weapon or, in these times of uncertainty while out and about, a good go-everywhere backpack weapon. Personally, that’s how I’d utilize the LMT CSW. 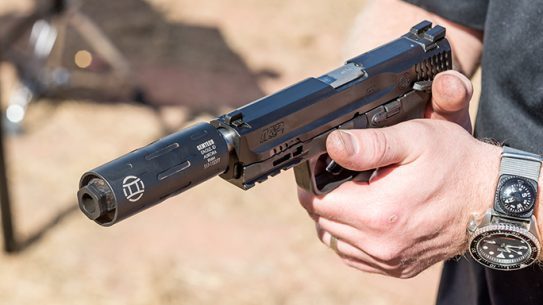 The Gemtech Aurora II Suppressor Is Coming to the Commercial Market

The original Aurora suppressor only saw a few units hit the commercial market, but...